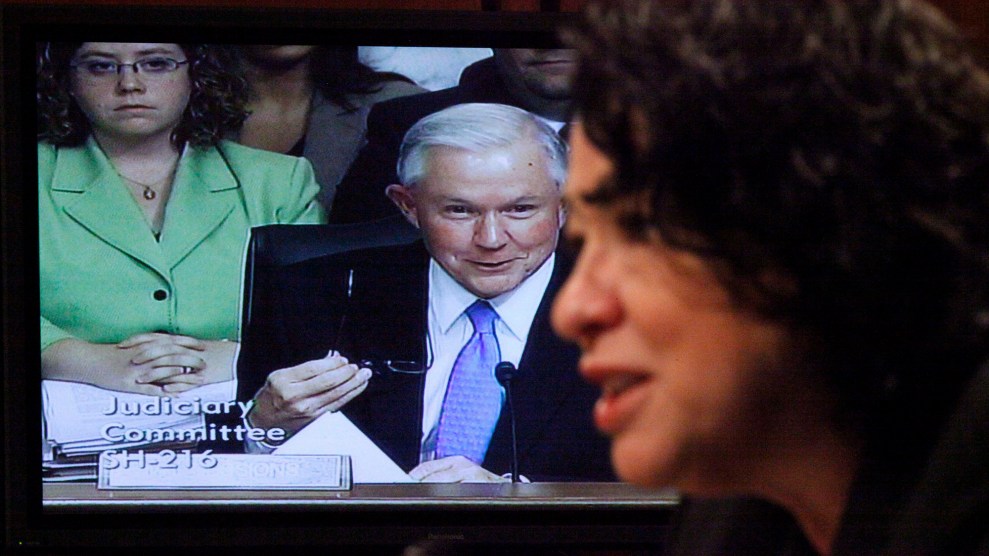 With Sen. Jeff Sessions of Alabama set to face his Senate colleagues in confirmation hearings after being tapped by Donald Trump as attorney general, many comparisons are being made to the last time he sought confirmation, in 1986, when his nomination to a federal judgeship was derailed by numerous allegations that he had made racist remarks. But another instructive precedent on Sessions’ views on race comes from a much more recent set of confirmation hearings, when Sessions challenged the Supreme Court nomination of Sonia Sotomayor.

Republicans pushed back on President Barack Obama’s 2009 nomination of Sotomayor by zeroing in on comments she had made about her Latina heritage. They raised fears about reverse discrimination, suggesting that as a justice, she would give unfair preference to minorities. Among her most vocal critics was Sessions.

Like Sotomayor, Sessions will have to be confirmed by the Senate, a process that starts in the Judiciary Committee that Sessions has sat on for two decades. From that perch in 2009, he spent his entire 30 minutes of questions with Sotomayor trying to determine whether she would be biased against white people. It’s a revealing line of questioning as Sessions seeks a job with significant influence over the civil rights of all Americans.

In addition to his hardline opposition to immigration and the allegations of racism, Sessions is known for unsuccessfully prosecuting three civil rights activists for voter fraud. The Trump team seems to be trying to tamp down questions about Sessions’ racial views to ease his confirmation. But it’s clear from his own questioning of Sotomayor that Sessions thinks the issue of racial bias is worth serious interrogation during confirmation hearings.

In that questioning, Sessions focused on two specific incidents in Sotomayor’s 17-year record as a judge. The first was a speech Sotomayor gave at the University of California-Berkeley School of Law, where she said she hoped “a wise Latina woman with the richness of her experiences would more often than not reach a better conclusion than a white male.” The second was a case in which, as a judge on the 2nd Circuit Court of Appeals, she sided with the city of New Haven, Connecticut, which had thrown out a promotion test for firefighters because few minorities did well on it. Sotomayor was in the majority on this case and sided with the lower-court ruling, but the Supreme Court overturned both courts’ rulings shortly before Sotomayor’s confirmation hearings. Sessions wasn’t the only Republican fixated on these questions; in opposing her nomination, several of his colleagues suggested Sotomayor might show a preference for minorities in her decisions.

“We had a more honest discussion of some of the complexities and sensitivities of the race question in this hearing than in the 12 years I have been in the Senate,” Sessions said after the hearings had concluded. But some supporters of Sotomayor disagreed. “This was an all-white judiciary committee asking condescending questions,” Sherrilyn Ifill, a law professor at the University of Maryland who in 2012 became president of the NAACP Legal Defense Fund, said at the time. “And it was an unequal power situation. She was not in a position to honestly engage with them, because she needed their votes.”

Sessions had 30 minutes to question Sotomayor directly as the ranking Republican on the Judiciary Committee, and he dedicated almost the entire time to the “wise Latina” comment and similar remarks, as well as the New Haven firefighters case. Here are some key passages from the hearing. You can watch Sessions’ full line of questioning here.

Sessions: [Y]ou’ve repeatedly made this statement: Quote, I “accept the proposition”—I “accept the proposition that a difference there will be by the presence of women and people of color on the bench, and that my experiences affect the facts I choose to see as a judge.” First, that’s troubling to me as a lawyer. When I present evidence, I expect the judge to hear and see all the evidence that gets presented. How is it appropriate for a judge ever to say that they will choose to see some facts and not others?

Sotomayor: It’s not a question of choosing to see some facts or another, Senator. I didn’t intend to suggest that. And in the wider context, what I believe I was—the point I was making was that our life experiences do permit us to see some facts and understand them more easily than others. But in the end, you’re absolutely right. That’s why we have appellate judges that are more than one judge because each of us, from our life experiences, will more easily see different perspectives argued by parties. But judges do consider all of the arguments of litigants. I have. Most of my opinions, if not all of them, explain to parties by the law requires what it does.

Sessions: Do you stand by your statement that my experiences affect the facts I choose to see?

Sotomayor: No, sir. I don’t stand by the understanding of that statement that I will ignore other facts or other experiences because I haven’t had them. I do believe that life experiences are important to the process of judging—They help you to understand and listen—but that the law requires a result. And it would command you to the facts that are relevant to the disposition of the case.

Sessions: Well, I will just note you made that statement in individual speeches about seven times over a number of years span…

On the firefighter case:

Sessions: So you stated that your background affects the facts that you choose to see. Was the fact that the New Haven firefighters had been subject to discrimination one of the facts you chose not to see in this case?

Sotomayor: No, sir. The panel was composed of me and two other judges.

Sessions was disturbed by the length of the decision in this case, believing it was too short.

Sessions: But do you think that Frank Ricci and the other firefighters whose claims you dismissed felt that their arguments and concerns were appropriately understood and acknowledged by such a short opinion from the court?

Sotomayor: We were very sympathetic and expressed your sympathy to the firefighters who challenged the city’s decision, Mr. Ricci, and the others. We stood the efforts that they had made in taking the test. We said as much.

They did have before them a 78-page thorough opinion by the district court. They, obviously, disagreed with the law as it stood under 2nd Circuit precedent. That’s why they were pursuing their claims and did pursue them further.

Sotomayor’s confirmation hearings lasted three days, and senators questioned not only the nominee but many other witnesses. In one notable exchange with a witness, Sessions seemed to question whether Hispanics were overrepresented among judges. The question went nowhere because the witness, conservative activist Linda Chavez, who urged senators to vote down Sotomayor’s nomination, disputed Sessions’ premise that having a large number of Latino judges was problematic.

Sessions: Ms. Chavez, I noticed one thing. According to the ABA statistics, only 3.5 percent of lawyers in America in 2000 were Hispanic, yet they—Hispanics make up 5 percent of the federal district court judges and 6 percent of circuit court judges. Would you comment on that?

Chavez: …I reject all of that. That doesn’t bother me in the least that they are overrepresented. I think we should not be making ethnicity and race or gender a qualification for sitting on the bench or being a firefighter or being a captain or lieutenant on a firefighting team. I think we ought to take race, ethnicity, and gender out of the equation.