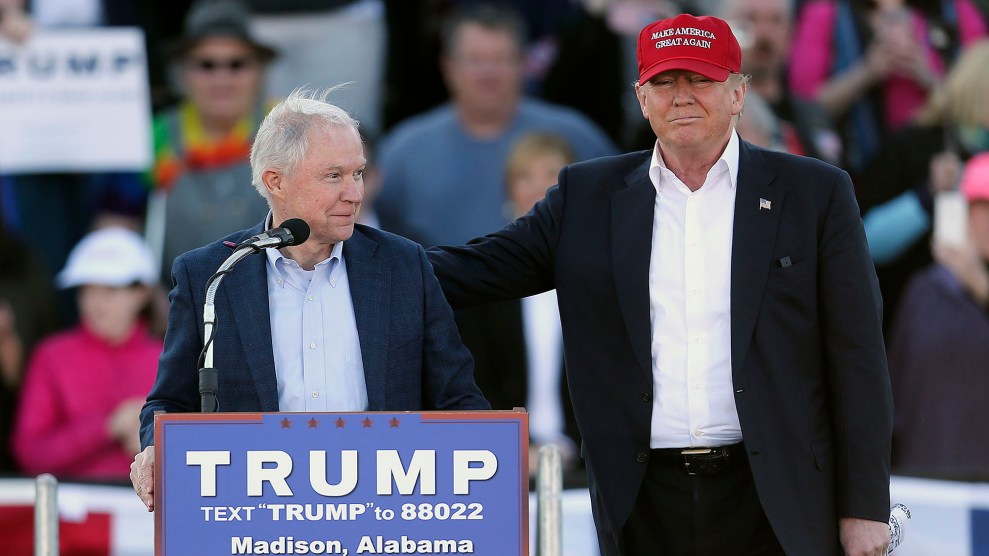 Jeff Sessions, the senator from Alabama whom President-elect Donald Trump has chosen to be the next attorney general, is best known for his hardline anti-immigration policies and allegations of racist remarks in his past. In an apparent attempt to soften that reputation, Trump’s transition team is boasting that civil rights groups are “strongly supporting” Sessions’ nomination.

That statement is broadly false: Civil rights groups have spoken out very critically of Sessions’ nomination. But in order to make its claim, the Trump team put out a press release citing the support of people who, upon closer examination, actively oppose civil rights for immigrants and people of color.

The press release announced the support of “civil rights and law enforcement groups.” But no group on the list is dedicated to promoting civil rights. There are just three individuals on the list who could plausibly be tied to civil rights—but they’re not civil rights advocates.

One is Leah Durant, whom the campaign describes as a “Civil Rights Attorney and founder of the Black American Leadership Alliance.” Durant has long worked in anti-immigration and nativist circles. In the mid-2000s, she worked for the legal arm of the Federation for American Immigration Reform (FAIR), an anti-immigration group founded by the racist white nationalist John Tanton. Until April, Durant ran a group called Progressives for Immigration Reform, which claims that immigration is bad for the environment. Anti-immigrant activists and white nationalists regularly attended the group’s gatherings. Durant’s Black American Leadership Alliance seems to have popped up in the spring of 2013 to oppose the bipartisan effort to pass comprehensive immigration reform at the time. The group argued that immigration pits Latino immigrants against African Americans in a fight for jobs. Like Durant, many of the group’s members have ties to FAIR.

The Trump team also listed attorney Peter Kirsanow, a Republican appointee on the US Commission on Civil Rights. Kirsanow used that position for years to investigate—and push the Justice Department to investigate—the New Black Panther Party. On Election Day 2008, two members of the militant group stood outside a Philadelphia polling place, leading to years of accusations by conservatives of voter intimidation. Kirsanow opposes affirmative action; according to the Huffington Post, when the late Justice Antonin Scalia famously suggested that black college students should seek “less-advanced” or “slower-track” institutions, he was referring to a brief by Kirsanow.

Also on the list is Robert Driscoll, who served in the Civil Rights Division of the Justice Department in the George W. Bush administration, when the division was politicized and failed to vigorously enforce civil rights laws. After leaving the Justice Department, he signed a 2008 letter asking the Civil Rights Division to investigate and prosecute voter fraud, including the group ACORN. As a private lawyer in 2010, he defended Sheriff Joe Arpaio of Maricopa County, Arizona, who is infamous for his brutal treatment of Latinos and immigrants, against charges of racial profiling. (A judge found Arpiao guilty in 2013. Arpiao was charged with criminal contempt of court disobeying that order and lost his reelection bid in 2016, after 24 years on the job.) More recently, Driscoll represented Republican North Carolina Gov. Pat McCrory in his effort to defend his infamous “bathroom bill,” which not only prohibited transgender people from using the bathroom corresponding to their gender identity but also rolled back basic protections for LGBT individuals in the state. The Justice Department sued North Carolina over the bill, and with Driscoll’s help, McCrory also sued the Justice Department, though he later withdrew the suit.

The Trump transition team is bragging about these people’s support for Sessions in what appears to be an effort to claim he will defend Americans’ civil rights. The real message might be the opposite one.