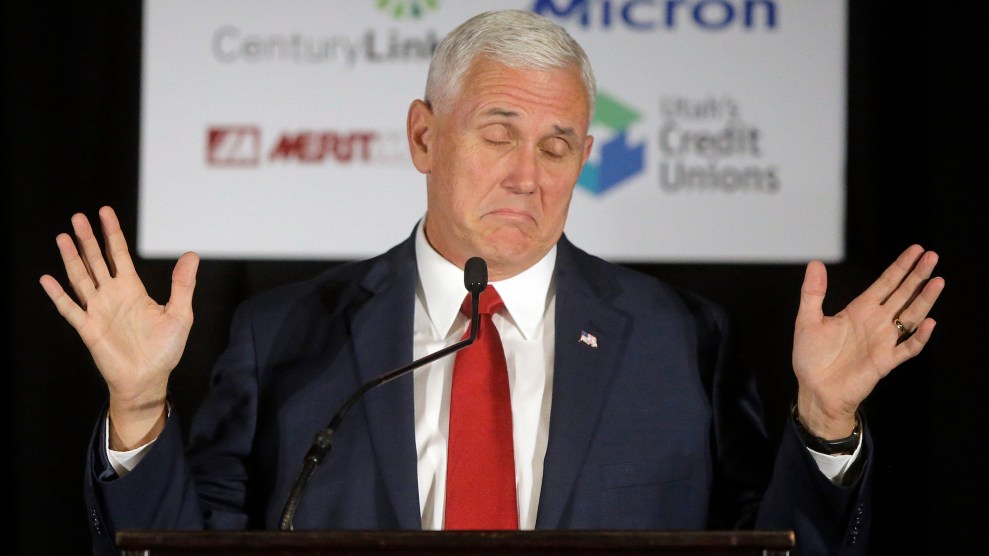 On Sunday night, Donald Trump made headlines by saying he disagreed with Mike Pence on Syria. By Monday morning, the Trump campaign was desperately insisting there was no disagreement at all.

At last week’s vice presidential debate, Pence stunned viewers by saying that Russia is helping the Syrian government kill civilians in Aleppo—and that the United States should be ready to use force against the Syrian regime. It was a sharp turn away from Trump’s previous comments, in which the real estate mogul has praised Syria and Russia for allegedly attacking ISIS.

At Sunday’s presidential debate, it was Trump’s turn to contradict Pence. “He and I haven’t spoken, and I disagree. I disagree,” Trump replied icily when asked about Pence’s comments. “I think you have to knock out ISIS.”

The contrast was obvious, but now Pence and Trump are pretending it never happened.

Pence appeared on all the major cable news networks Monday morning and claimed that ABC’s Martha Raddatz, who co-moderated Sunday’s debate, had “mischaracterized” his position on Syria. Pence said last week that “if Russia chooses to be involved…in this barbaric attack on civilians in Aleppo, the United States of America should be prepared to use military force to strike military targets of the Assad regime to prevent them from this humanitarian crisis that is taking place in Aleppo.” On Monday, he claimed his statement had been narrowly focused on Aleppo and that Raddatz had wrongly implied he wanted take on Syria and Russia in general. “The way Martha presented that question last night was to suggest that Russian provocation broadly and that of the Assad regime should be met with military force,” he said on MSNBC.

Pence on whether he or Trump is right on Syria: “We’re really both right and Martha Raddatz was wrong.” https://t.co/XagPubcSXC

In fact, during Sunday’s debate, Raddatz asked both Clinton and Trump specifically about the crisis in Aleppo. “If you were president, what would you do about Syria and the humanitarian crisis in Aleppo?” Raddatz asked Trump. Immediately after saying that, Raddatz described Pence’s comments nearly verbatim: “And I want to remind you what your running mate said. He said provocations by Russia need to be met with American strength and that if Russia continues to be involved in airstrikes along with the Syrian government forces of Assad, the United States of America should be prepared to use military force to strike the military targets of the Assad regime.”

Trump then said twice that he and Pence disagreed. Trump went on to falsely suggest that Aleppo “basically has fallen.” He also praised the Syrian government’s alleged actions against ISIS. “Right now, Syria is fighting ISIS,” he said. That claim is also false: The Syrian government and its allies, including Russia, have overwhelmingly attacked rebel groups and civilians rather than ISIS. In fact, the Syrian regime abetted the rise of ISIS and has even struck oil deals with the terrorist group.

Pence isn’t the only member of the Trump campaign struggling to answer questions about the GOP candidate’s disagreement on Aleppo. Former CIA Director James Woolsey, a national security adviser to the Trump campaign, was asked on CNN Monday what the campaign’s policy on Syria actually is. Woolsey refused to even answer the question.

“But, wait, Mr. Director,” said Kate Bolduan, a CNN anchor who was visibly baffled by Woolsey’s attempts to dodge the issue. “You’re the former CIA director. You’re a national security adviser to the Donald Trump campaign. When it comes to a key policy position that you would assume would be a unified position of the campaign, I would also assume you would know what it is and be able to voice it.”

“I’m not telling you one way or the other,” Woolsey replied. “The candidates are the ones who are going to communicate the policy decisions to the public, not me.”