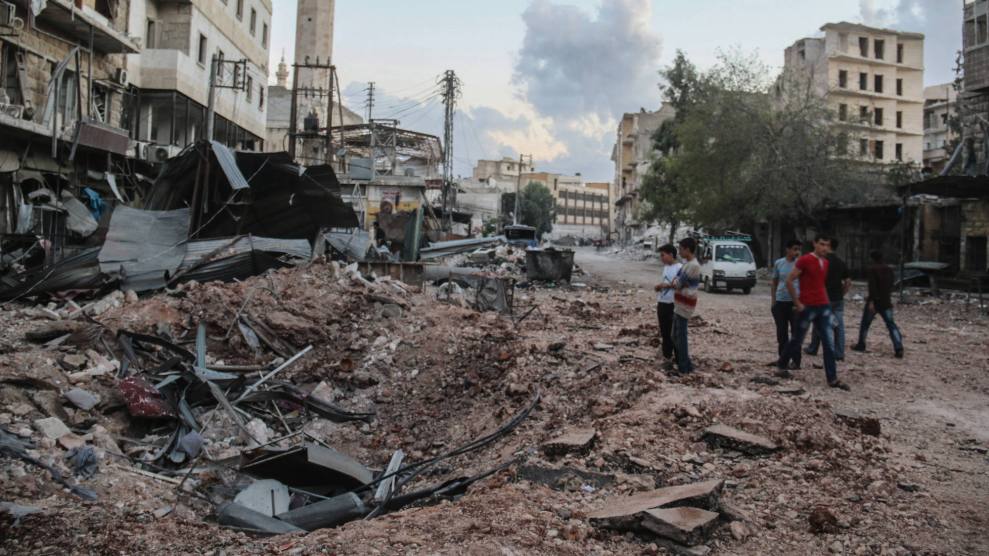 Even by the already horrific standards of the Syrian civil war, the violence in the city of Aleppo during the past week has been brutal. Russian and Syrian government airstrikes killed more than 300 people, targeted the last vital scraps of medical services in rebel-held areas, and used bunker-busting bombs in what UN Secretary-General Ban Ki Moon called “new depths of barbarity.” The attacks only added to the 25,000 people who have died in Syria since a temporary truce ended in April, according to the Syrian Observatory for Human Rights.

Yet with the carnage in Syria only getting worse, neither Donald Trump nor Hillary Clinton discussed the Syrian civil war during Monday night’s presidential debate, to the dismay of analysts and activists. “The fact that it wasn’t mentioned in the presidential debate is depressing, to say the least,” says Kenan Rahmani, a legal and policy adviser to the Syria Campaign, an advocacy group that focuses on protecting Syrian civilians. “This [was] one of the worst weekends since the start of the conflict.” Lena Arkawi, the spokeswoman for the American Relief Coalition for Syria, issued a statement on Tuesday saying her group was “deeply disappointed by the utter failure of last night’s debate to even mention Syria. That oversight is far more telling than Gary Johnson’s Aleppo gaffe.”

The candidates did mention Syria once during the 90-minute debate, but only in passing. “We’re hoping that within the year we’ll be able to push ISIS out of Iraq and then, you know, really squeeze them in Syria,” Clinton said while talking about her plans for the anti-ISIS campaign. Trump did not speak about Syria at all. That followed the pattern of the campaign, during which the candidates have been pressed for their plans to fight ISIS in Iraq and Syria but have paid little attention to the civil war between the Syrian government and the armed groups that oppose it.

But Shadi Hamid, a senior fellow at the Brookings Institution’s Center for Middle East Policy, says there’s no way to separate these issues cleanly. “It contributes to all these other problems,”  he says. “So there’s no way to fight ISIS unless you’re also willing to talk seriously about Syria, the Syrian civil war being one of the main contributors to ISIS’s rise. If we want to talk about Iraq, then you have to talk about Syria. If you want to even talk about the future of the European project, you have to be willing to talk about the Syrian refugee crisis.”

Both Trump and Clinton may have good reasons for dodging the topic. “It’s difficult for Hillary, because to talk about how Syria’s gotten so bad would require some serious criticism of the Obama administration,” Hamid points out. “It’s a complicated issue to address for someone who was Obama’s secretary of state until 2013.”

Clinton did push for stronger action against the Syrian government while in office, which may make it easier for her to take on Obama’s policies. But her support for using more force against the Assad regime may not be popular. She’s notably in favor of a no-fly-zone to protect Syrian civilians, a policy that could potentially bring American aircraft into a dangerous direct conflict with Russian jets. “The last thing you want is to provoke a conflict with the Russians,” Lawrence Korb, a senior fellow at the Center for American Progress, told the Huffington Post on Monday night.

“I think [a no-fly-zone is] smart policy, but Americans may not necessarily be excited about that prospect of getting more involved in Syria,” Hamid says. A poll conducted by the Chicago Council on Global Affairs in August found that while 72 percent of Americans backed airstrikes against ISIS, support for a no-fly-zone was 20 points lower.

Meanwhile, Trump wants to forge a closer anti-ISIS partnership with Russia, which has relentlessly bombed civilians on behalf of the Syrian government while targeting hospitals and potentially even a UN aid convoy last week. If that partnership carried over into the larger war, it would place him on the side of the Syrian regime and its allies, who have killed the overwhelming majority of civilians during the past five years.

“Russia, according to the Syrian Network for Human Rights, has killed more Syrian civilians now than ISIS,” Rahmani says. He is currently hosting Aleppo’s now-famous White Helmet rescue workers during their trip to the United States, and he says they are troubled by Trump’s affinity for Russian President Vladimir Putin. “Given Russia’s significant role in killing Syrian civilians, both for me personally and for White Helmets, it’s difficult to imagine how we could have a president of the United States speak openly in a praiseworthy way of Vladimir Putin.”