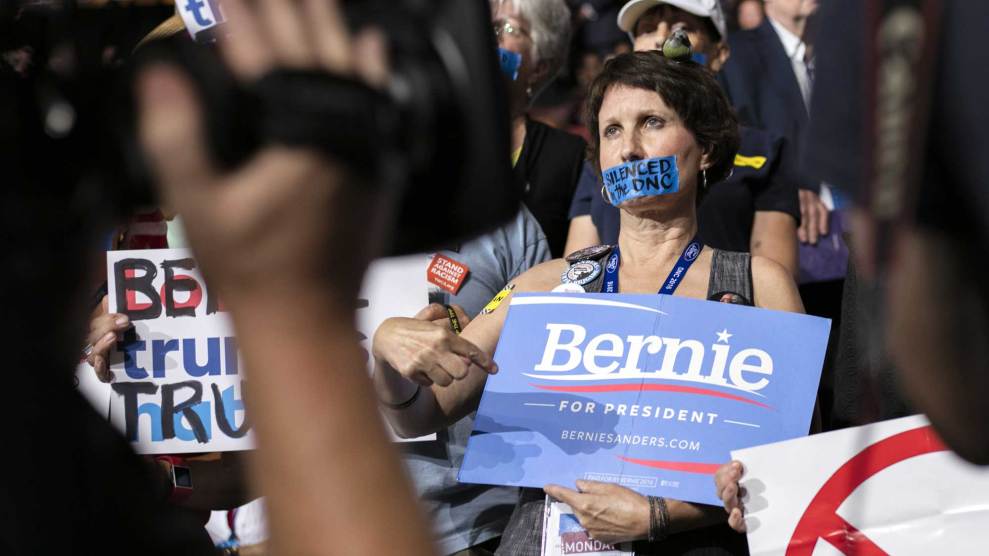 On Monday afternoon, Bernie Sanders sent a message to his delegates requesting that they not disrupt the convention by mounting protests inside the Wells Fargo Center. He followed up that evening, on the opening night of the Democratic National Convention, with a forceful speech declaring that to advance the progressive revolution he has championed, his supporters should work fervently to elect Hillary Clinton. Now the Sanders delegates who came to Philadelphia disappointed, angry, and looking to express their dissatisfaction with Clinton, the Democratic Party, and the whole damn political process are grappling with what to do.

On Monday, some Sanders delegates appeared to be looking for a fight. Organizers of the Bernie Delegates Network—an outfit independent of the Sanders campaign—talked of convention floor protests or walkouts and even the possibility of nominating a vice presidential candidate to challenge Tim Kaine, whom some Sanders supporters view as too centrist. Sanders delegates at breakfast meetings jeered Clinton. And when Sanders addressed his delegates that afternoon and urged them to support Clinton against Trump, he was met with a wall of loud boos and seemed unnerved by the fierce reaction.

But by Tuesday morning, there was a shift. Clinton delegates reported that the anti-Clinton mood of many Sanders delegates had seemed to soften. Mitch Cesar, a Democratic Party official in Florida and a Clinton delegate, recalled, “I watched the Bernie people’s reaction very carefully as the evening went on, with Michelle Obama, Elizabeth Warren, and Bernie speeches. There was a slow warming. I saw the Bernie delegates becoming more energized and enthusiastic in reacting to Clinton. It was incremental but continuous. It’s a process. And we’re just looking for progress.” And though some Sanders delegates had booed references to Clinton at the start of the day’s proceedings, the booing did diminish over the course of the first night.

At a Tuesday morning briefing held by the Bernie Delegates Network, no one was discussing protests or walkouts. Norman Solomon, the co-chair of the group, told reporters that an effort to challenge Kaine had failed after a Sanders supporter went to a Democratic National Committee office in search of the forms needed to file such a challenge and was not provided with the necessary paperwork. He claimed the DNC had thwarted this move in an unfair manner. Solomon said the anti-Kaine Sanders delegates had recruited a known “genuine progressive” to run against Kaine in what he acknowledged would be a symbolic endeavor. But Solomon refused to identify this progressive. Reporters protested that he was not being transparent. But Solomon insisted that the progressive who had offered to take on Kaine had agreed to do so on the condition that he or she would remain anonymous until it was clear this challenge could actually occur.

The press conference grew a bit heated, as incredulous reporters pressed Solomon for the name and he insisted the issue was “moot” due to the supposed DNC shenanigans. At one point, a reporter requested that Solomon text the person and ask if he could disclose his or her name. Solomon and his fellow Sanders delegates at the event did not identify any other organized actions that Sanders delegates might conduct to express their discontent with Kaine, Clinton, or the Democratic Party. But one delegate from New Mexico, Teva Gabis-Levine, who is a whip for his state’s Sanders delegation, noted that on Monday when he received instructions from the Sanders campaign to tamp down the booing, he did not pass that guidance to his delegation. He said he wanted Sanders delegates to “speak their mind as they see fit.”

At the event, Donna Smith, executive director of Progressive Democrats of America and a Sanders supporter, said she couldn’t stop crying during Sanders’ convention speech: “There’s a great deal of heartbreak surrounding listening to Bernie Sanders…A feeling of a moment history passed.” She asserted that there remained a need to allow Sanders delegates to “have a voice.” Though Sanders and pro-Sanders speakers at the convention noted that they had achieved concessions from the Clinton campaign in drafting a progressive platform and implementing a rules change lessening the influence of superdelegates, Solomon contended that the Clinton camp and the DNC has not done enough to achieve party unity: “The onus rests in the hands of Hillary Clinton and the DNC.” But he did not present options for the Sanders delegates.

Smith and Solomon did note that Sanders was right regarding the threat posed by Trump. “It’s essential to defeat Donald Trump,” Solomon said. But it appeared that he and Smith—and perhaps other Sanders backers—are having a tough time resolving what may be conflicting impulses: how to continue the Sanders’s anti-establishment revolution while supporting the establishment candidate who can keep Trump out of the White House. As Solomon said of Sanders, “he’s making the best of the box he’s in.”