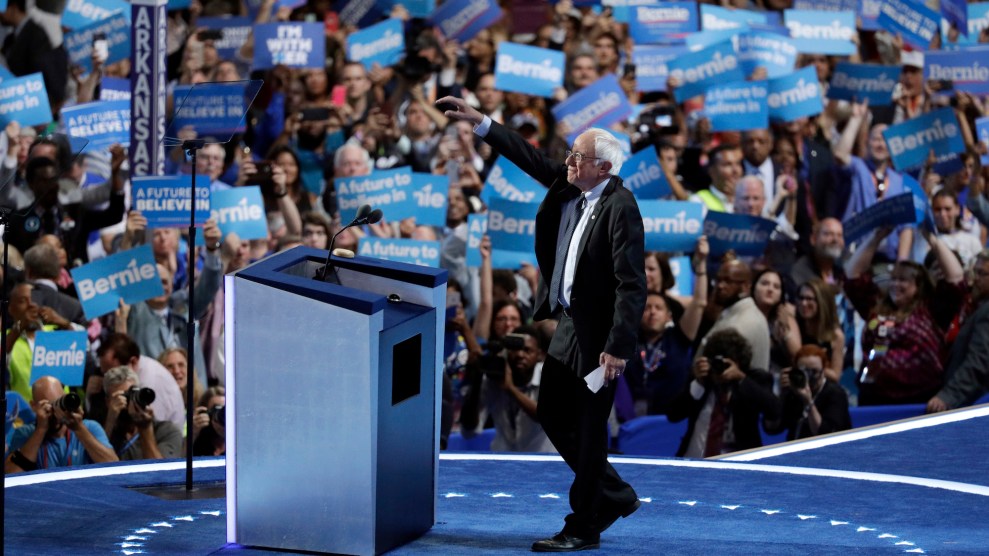 Bernie Sanders urged delegates on Monday night in Philadelphia to rally behind the party’s presumptive presidential nominee, Hillary Clinton, after a tense opening day at the Democratic National Convention. “Based on her ideas and her leadership, Hillary Clinton must become the next president of the United States—the choice is not even close,” Sanders said.

The Vermont senator spoke for nearly 30 minutes and was often interrupted by sustained ovations from his supporters—as well as a handful of boos from hardliners who still oppose Clinton’s candidacy.

“It is no secret that Hillary Clinton and I disagree on a number of issues—that’s what this campaign has been about,” Sanders said as he wrapped up his speech. “That’s what democracy is about. But I am happy to tell you that at the Democratic Platform Committee, there was a significant coming together between the two campaigns, and we produced by far the most progressive platform in the history of the Democratic Party.”

He ended with praise for Clinton’s work as first lady and as a senator. “I remember her as a great first lady who broke precedent in terms of the role that a first lady was supposed to play as she helped lead the fight for universal health care,” Sanders said. “I served with her in the United States Senate and know her as a fierce advocate for the rights of children.”

He continued, “Hillary Clinton will make an outstanding president and I am proud to stand with her here tonight.”

Sanders’ speech came at the end of a combative day at the DNC. In the afternoon, the Vermont senator had addressed many of his 1,900 delegates at a ballroom in a downtown convention center, but when he urged them to support Clinton in the fall, he was repeatedly interrupted by boos, a sign that the unrest within his faction of the party had not been quelled by the resignation of DNC chair Debbie Wasserman Schultz.

This time, Sanders made a more direct appeal to delegates and voters watching at home who were considering sitting out the election. He didn’t just talk up Clinton and the party platform, he attacked Donald Trump repeatedly, outlining the policy areas—reproductive rights, climate change, and minimum wage—in which a victory by the Republican would set back his political revolution.

“If you don’t believe this election is important, if you think you can sit it out, take a moment to think about the Supreme Court justices that Donald Trump would nominate and what that would mean to civil liberties, equal rights, and the future of our country,” Sanders said.