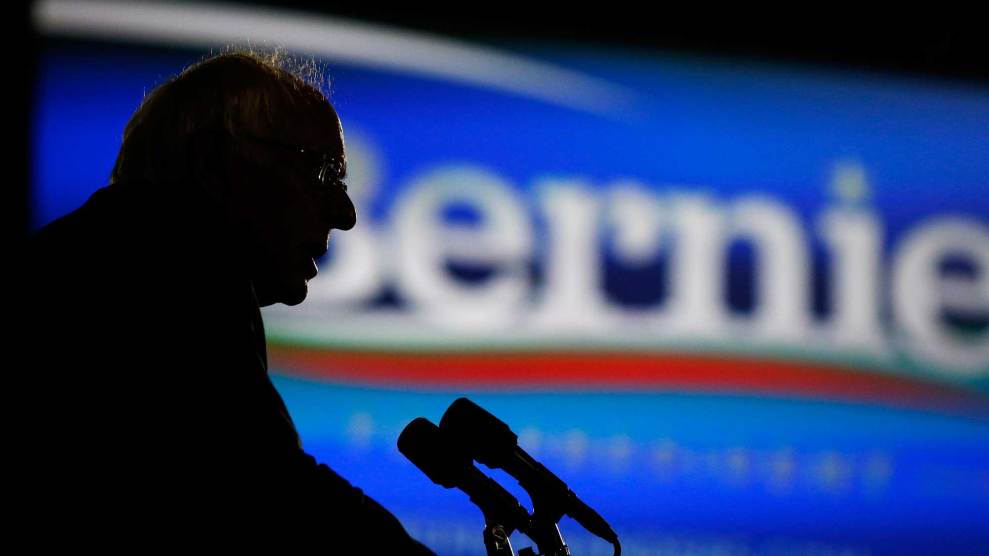 In the HBO series Game of Thrones, one overwhelming theme has dominated the six seasons: humans should not get lost in bickering for power when an existential threat looms. All the various clans—the Lannisters, the Starks, the Targaryens, the Boltons, the Tyrells, the Baratheons, and others—waste blood and treasure vying for control of this throne or that castle, while a zombie army with the capacity to eradicate humanity is slowly advancing from the north. Oh fools, you mortals be. And as the political primary season draws to an end, Democrats are in a position similar to that of the assorted houses of Westeros. An existential threat is on the horizon: Donald Trump. He’s a narcissistic bigot who in power could be a profound danger. He seems to lack a basic understanding of the nuclear arsenal of which he would be in charge. He claims climate change is a hoax. He has vowed to play chicken with the debt ceiling. It is not hard to envision him triggering (or ignoring) crises that would threaten the survival of the United States or other parts of the globe. If he accepted budgets from the Republican-controlled Congress, millions of low- and middle-income Americans would lose assistance. And his Supreme Court appointments could well restrict reproductive rights, bolster corporate interests, and approve further erosions of voting rights. Make America great again? No, with Trump, winter is coming.

Given this harsh reality, Sen. Bernie Sanders, the socialist independent turned Democrat who has run a stupendous campaign that has promoted progressive causes and inspired millions, has a stark choice. To continue his crusade to win the Democratic Party’s crown or to drop his claim and join forces with a rival to form a common front against the Night’s King (that is, Trump). And he ought to reach a decision soon.

Even before California and New Jersey voted on Tuesday—the major contests of the night, which Hillary Clinton won handily—Clinton was proclaimed by media outlets the presumptive Democratic nominee, having bagged enough pledged delegates and enough promises from superdelegates (elected officials and party officials who automatically get a vote at the party’s convention). And by losing the Golden State by 13 points, Sanders forfeited his claim (whether it was justified or not) to be the candidate of momentum. Still, he vowed to fight on. And as Team Sanders had already acknowledged, the Vermonter has only one long-shot path toward the nomination. He must sway hundreds of the superdelegates to drop their support of Clinton and flock to his side. He must persuade the leaders of a party (which Sanders did not join until last year) to dump the candidate who was chosen by more voters and who amassed more delegates. This would mean that Sanders, a champion of grassroots democracy, would be asking party elites to eschew the will of the voters. And the only way to do this would be to mount a vigorous campaign that aims to eviscerate Clinton.

Sanders can’t be too polite in such an endeavor. He would have to spend the seven weeks leading up to the Democratic convention in Philadelphia fiercely contending that Clinton is not fit to be the party’s nominee. This will be an uphill battle. He does have his quiver of arguments: She’s too close to Wall Street, he has mobilized young voters, she’s burdened with assorted baggage, including the emails controversy (and some Sanders supporters claim, without any evidence, that she will be indicted), he’s the outsider in an outsider’s year who can reach more independent and blue-collar voters, she cannot exploit the populist progressive energy as he has done, and he does better than her in polls against Trump. None of this is new. It’s the case that Sanders and his backers have been presenting for months. It did not convince a majority of the voters in Democratic primaries—though Sanders did exceedingly well, racking up millions of votes and demonstrating there is a hunger for his from-the-left critique of a rigged economy and a yearning for a political revolution aimed at ridding the influence of big money.

Yet why is there any reason to believe these arguments will fare better with a smaller audience of Democrats who are mostly establishment-minded? The members of this crowd certainly know that it is largely irrelevant that Sanders polls better against Trump at this point. The self-proclaimed democratic socialist has not yet been subjected to hundreds of millions of dollars of negative ads slamming him for being a socialist or whatever. Comparing how Sanders polls against Trump to Clinton’s performance in such matchups is not an apples-to-apples exercise. She has been assailed by Republicans and the right for decades, and she was a punching bag for all the GOP candidates throughout the primary season. And though Sanders fans may not believe this, Clinton went relatively light on him throughout the campaign. His current standing in polls against Trump will not convince many political professionals who fancy Clinton.

Outside any unforeseen events—a new scandal, a health issue—the odds are damn small that Sanders, who has not been a Democratic loyalist, can successfully court Democratic Party insiders. But if he does spend seven weeks belittling Clinton and snapping at her heels, he could undermine her efforts to take on Trump. And there’s really no point in him pushing ahead with half-measures. If his goal is to bring her down, he will have to be ferocious and unrelenting. In earlier stages of the campaign, one could argue that vigorous competition from Sanders was good for Clinton and forced her to become a better and more progressive candidate. (Sanders and his supporters have not been wrong in many of their critiques of her.) But a Sanders scorched-earth effort to deny her the nomination in the weeks prior to the convention—and possibly at the convention—is not likely to produce benefits for Clinton. It is likely to distract or pin her down—just as she is targeting Trump. This is a zero-sum phase: Sanders can only gain at Clinton’s expense.

There are die-hard Bernie-ites who do believe that Clinton cannot win in the fall and that she is moments away from being indicted on some charge or another. Of course, these people will cheer on Sanders as the only sane alternative to Trump and hope that he does whatever it takes to wrest the nomination from Clinton. If Sanders shares these beliefs, he may feel obligated to play the skunk at the garden party in a bid to save the Democratic Party from itself. But he cannot pursue this course without likely weakening her—at least, without consuming time and energy that could be applied to the campaign against Trump. So if he does not succeed in overthrowing the queen, there will be damage to the effort to save America from the first reality television star to conquer a political party.

Sanders has signaled that he will make demands at the convention regarding platform issues (the Middle East!) and the rules governing the next presidential contest. He will have a choice as to how much of a fuss to stir on these assorted fronts. There are ways to debate these matters as skirmishes, rather than battles. And Clinton and her crew will have to figure out how much to yield in order to obtain the support of Sanders and his people.

But before that happens, Sanders will have to make a more fundamental decision—and do so soon. The voting will be completely over on June 14, after a primary in Washington, DC. Sanders can tread water until then. But come next week, he will have to select a path. Maintain an aggressive challenge to Clinton that will prevent her and the Democratic Party from fully devoting themselves to stopping Trump? Or join her so they can get an early start on a unified campaign against Trump? At the end of the 2008 campaign, as some of Clinton’s supporters were pushing her to keep on fighting against Barack Obama, Sanders declared his support for Obama two days after Obama reached the magic number of pledged delegates and superdelegates. This was two days before Clinton dropped out of the race.

Now he has a tougher choice. After exciting millions and achieving so much, it’s difficult to call an end to a crusade. (Presidential ambition, the late Rep. Morris Udall once said, “can only be cured by embalming fluid.”) Yet Sanders has to determine whether continuing on could end up helping Trump. There’s no doubt that Trump is a threat to progressive governance—and perhaps much more. The message of Games of Thrones is that there’s a much bigger game than the tussle for the Iron Throne. Sanders now must decide whether he’s still playing for the nomination or for the larger fight ahead. In the next few weeks, he cannot do both.