Over at the Washington Monthly, D.R. Tucker is pretty fed up with Bernie Sanders. He agrees with me that Sanders seems too bitter these days, and he also thinks that Bernie should dial back the attacks on Hillary now that 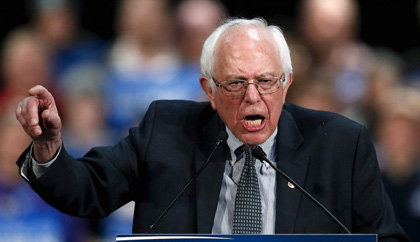 she’s the almost certain winner of the primary. But he also says this:

As the old joke goes, even Stevie Wonder can see that Sanders is going to have an epic meltdown at the convention if superdelegates reject his request for the nomination. The behavior of Sanders, his campaign staff, and some of his supporters is profoundly disappointing to those who wanted Sanders to play a constructive and healthy role in defining the post-Obama Democratic Party. During the 2008 Democratic primary, Clinton may have said a few undiplomatic words about Obama in the final days of her campaign, but it never seemed as though Clinton personally loathed the future president. Things are much different this time around.

….Clinton and the Democratic Party should be quite concerned about the prospect of a disastrous convention, disrupted by Sanders supporters upset over their hero not getting what they believe he was entitled to.

I don’t believe this for a second. Take a look at what Bernie has been doing lately. He’s demanded more representation on the platform committee. He’s objected to a couple of committee chairs. He’s remarked that he hopes Hillary chooses a vice president who’s not in thrall to Wall Street.

This is exactly what Sanders should be doing. Teeing off on Hillary is a bad idea for Sanders, for the Democratic Party, and—given who the Republican nominee is—bad for the country and the world. Sanders may, as Tucker says, loathe Clinton, but he needs to put that aside.

But there’s no reason for him to put aside the enormous leverage he possesses to move the party in a more progressive direction. He won a lot of votes. He has a lot of delegates. He has a substantial following that’s willing to take cues from him. There’s no intelligent politician in the country who wouldn’t use that to push the country in a direction he deeply believes in. Hillary would do the same thing in his position.

So go ahead Bernie: press for a more progressive platform. Press for a progressive vice president. Press for primary rule changes that you think would give progressive candidates a better shot at winning. Press for the policies you believe in, and don’t hold back. In the end, the threat of Donald Trump will prevent Bernie and his followers from hating Hillary too long, but in the meantime there’s no reason not to use every weapon in his arsenal to browbeat both Hillary and the Democratic Party into moving in the direction he wants them to go.

Just keep the personal attacks, both real and implied, out of the picture. They do you no good.