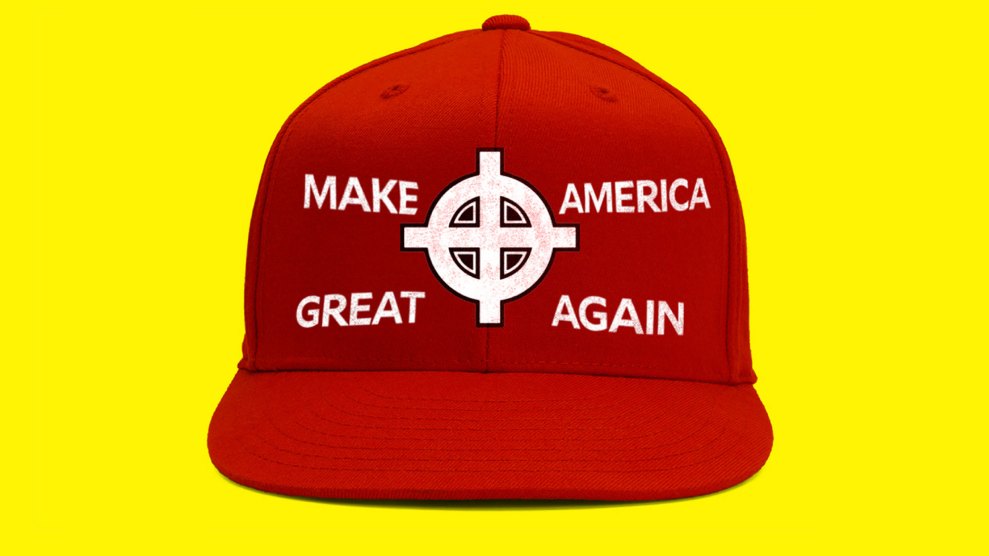 On May 10, Los Angeles attorney William Johnson resigned as a delegate for Donald Trump to the Republican National Convention after Mother Jones reported that Johnson is the leader of the white nationalist American Freedom Party. The Trump campaign, which selected Johnson as one of its California delegates, blamed his inclusion on a “database error.” But white nationalist leaders, including one who has contributed to an online hate forum, are now claiming that other members of their movement have become delegates for Trump.

“[H]ere is what they don’t know: we have more delegates!” the American Freedom Party wrote on its Facebook page last week, in response to the Mother Jones report.

Johnson said in an interview that he is not directly involved with the AFP’s Facebook page, but he confirmed that the page is run by Robert H. DePasquale, whose covert activism as a white supremacist is well documented. According to the Southern Poverty Law Center, DePasquale is a web designer in New York City who has built sites for white supremacist groups and has pseudonymously posted more than 20,000 racist and anti-Semitic messages on Stormfront, a leading online hate forum. (The forum’s motto is “White Pride World Wide.”) DePasquale did not respond to requests for comment. The AFP’s Facebook post, captured by Mother Jones in this screen shot, was soon deleted: 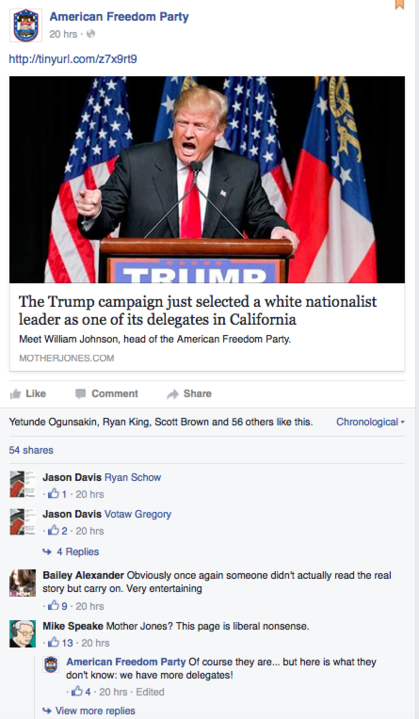 The AFP has come to see the Trump campaign as its path to taking white nationalism into the mainstream. In recent months the group and a related super-PAC have produced and funded pro-Trump robocalls, set up a “political harassment hotline” for Trump supporters, and promoted Trump on a talk radio show.

But movement leaders appear torn about how much to shout from atop the Trump bandwagon versus staying in the shadows. Johnson told Mother Jones that he knows of at least one other AFP member who has been selected by a state party to attend the GOP convention this July. Johnson declined to identify the person for fear of compromising the person’s involvement with the GOP, but he disclosed that he is an “honorary” delegate for Trump from an Eastern state. So-called honorary delegates do not have voting power, but typically are selected by state parties to attend the convention, often as a perk in exchange for political donations.

At Johnson’s request, the AFP delegate for Trump agreed to be interviewed by Mother Jones, but later backed out. Johnson said there are additional white nationalist Trump delegates who have been in touch with movement leaders, though “I don’t actually know who they are. There are people who are surreptitious,” he said.

“Right now people are still a little bit afraid because they will have the same reaction that happened to me,” Johnson explained. “We just have to give it a few more months before people feel comfortable.”

Led by Johnson since 2009, the American Freedom Party “exists to represent the political interests of White Americans” and aims to preserve “the customs and heritage of the European American people.” The AFP has never elected a candidate of its own to public office and is estimated to have only a few thousand members, but it is “arguably the most important white nationalist group in the country,” according to the Southern Poverty Law Center’s Mark Potok.

Johnson believes that Trump’s rise will motivate other white nationalists to express their views publicly. “You’ve got to realize that I’m out in the open and upfront, but a lot of people aren’t there yet,” he said. “Talk to me in eight months and more people will be out. Particularly if Donald Trump gets elected.”