Meet the chairman of the American Freedom Party:

William D. Johnson, J.D., is an international corporate lawyer practicing in Los Angeles….As Chairman of the American Third Position, he serves the purpose of speaking on behalf of the party, and championing its sensible and just policies before the American people. He is also, more than any other, responsible for safeguarding the course, values, and program of the party.

White Americans should push back! Change your party allegiance to the American Freedom Party. A Nationalist party that shares the customs and heritage of the European American people….Return to Americans their traditional right of freedom of association, including freedom in racial matters, along with the abolishment of all forms of government- and corporate-mandated racial discrimination and racial preferences, 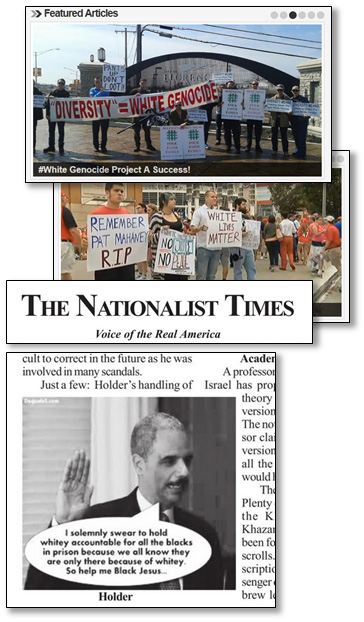 such as affirmative action, quotas, and all forms of “sensitivity training.”

Trump’s slate includes William Johnson, one of the country’s most prominent white nationalists….”I just hope to show how I can be mainstream and have these views,” Johnson tells Mother Jones. “I can be a white nationalist and be a strong supporter of Donald Trump and be a good example to everybody.”

….Armed with cash from affluent donors and staffed by what the movement considers to be its top thinkers, AFP now dedicates most of its resources to supporting Trump. Johnson claims that AFP’s pro-Trump robocalls, which have delivered Johnson’s personal cellphone number to voters in seven states, have helped the party find hundreds of new members. “[Trump] is allowing us to talk about things we’ve not been able to talk about,” Johnson says. “So even if he is not elected, he has achieved great things.”

….Johnson also now finds it easier to be himself: “For many, many years, when I would say these things, other white people would call me names: ‘Oh, you’re a hatemonger, you’re a Nazi, you’re like Hitler,'” he confessed. “Now they come in and say, ‘Oh, you’re like Donald Trump.'”

UPDATE: No worries, folks. This was all just a big misunderstanding: “A database error led to the inclusion of a potential delegate that had been rejected and removed from the campaign’s list in February 2016.” OK then.