Protests against gender-inclusive bathrooms are on the rise. On Monday, according to local news reports, more than 500 people showed up at a school board meeting in Horry County, South Carolina, to debate whether transgender kids should be able to use bathrooms of their choice. Most of the parents objected, with some holding signs that read “Keep kids safe” or “It’s common sense.” After one woman stood up to show her support for transgender rights, the others did their best to shut her up, by breaking into a hymn. Watch the video above (the hymn comes at the end), via the Sun News.

In states in the Midwest and South, protesters have been showing up at Target stores, after the retail giant announced on April 19 that transgender customers and employees would be welcome to use whichever bathrooms correspond with their gender identity. More than 1 million people have since signed a petition to boycott the retailer, claiming that “Target’s policy is exactly how sexual predators get access to their victims.” The American Family Association, a conservative nonprofit that organized the boycott, says it has been “testing” Target’s policy by sending men who aren’t transgender into the store’s women’s bathrooms.

In Illinois, the police responded on Monday to a 911 call reporting an “active shooter” at a Target store. The person turned out to be 39-year-old Michael Merichko, who was protesting the bathroom policy by walking around the store with a Bible, allegedly causing a disturbance. Police found no weapons at the scene, but the man was arrested and charged with disorderly conduct, according to a statement from the police. Merichko explained his take on the situation in a video on Facebook, in which he says he was simply reading scriptures to himself in the store. “Here’s the concern,” he says. “I do not want some wicked pervert in the same bathroom as my wife or my daughter who self-identifies at that time as a woman.”

In Florida, Anita Staver, president of the Liberty Counsel, a conservative legal group that has supported restrictive bathroom bills across the country, pledged to take her Glock .45 into the retailer’s restrooms to protect herself. She said she’s not afraid of transgender people, but of “perverts” who will pretend to be transgender and use the policy to gain access to women’s bathrooms, even if they don’t identify as women.

I’m taking a Glock .45 to the ladies room. It identifies as my bodyguard. #BoycottTarget @Target 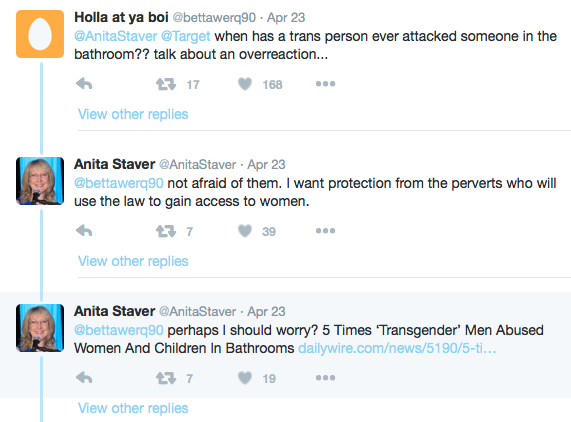 Staver may have failed to note that Target adopted a policy of prohibiting firearms on its premises nationwide after its stores became a high-profile battleground for gun rights activists in 2014.

Below is one of many videos posted to YouTube by other Target protesters. In it, a man wearing a shirt that says “Abortion is Murder” and “Jesus Is Life” shouts at employees near the front door: “You people that work in here, shame on you! Find another job!” (Who recorded the video and where remain unclear.)

Law enforcement experts have debunked the “bathroom predator” myth. “It’s the most ridiculous thing I’ve ever heard,” Detective Nicole Monroe, a spokeswoman for the Baltimore Police Department, told the Washington Blade of the notion that people would pose as transgender in order to get inside women’s bathrooms to sexually abuse women and children. According to Media Matters for America, there have been no such incidents in any of the cities where transgender people are allowed to use public bathrooms of their choice.