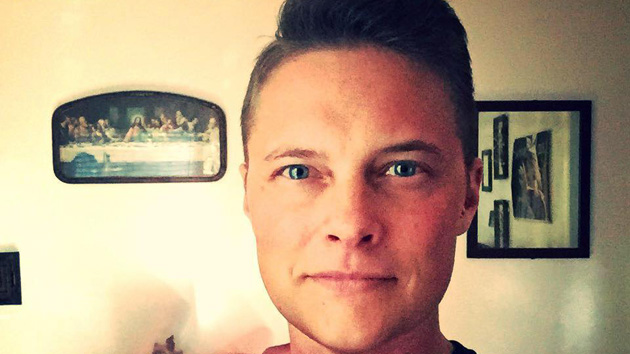 Charlie Comero, a 35-year-old transgender man in Charlotte, North Carolina, was nervous about having to use women’s bathrooms after his state enacted HB2, a sweeping anti-LGBT law that says you can only use public facilities that match the sex on your birth certificate. So he decided to prepare: He printed cards (see photo below) to hand out to the women he met inside. We asked him to share his story below, in his own words, edited for length and clarity.

I grew up in Michigan, on a farm in a small town, and I moved to Charlotte almost four years ago to teach for a local high school. I was very nervous about moving to North Carolina—it’s technically the “Bible Belt”—but the truth is that Charlotte is amazing, liberal. I fell in love with the city and have stayed ever since. 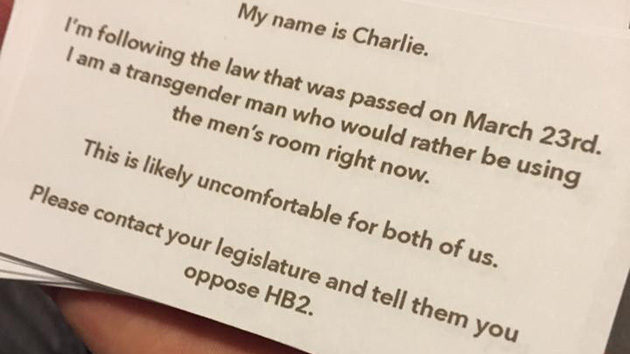 Now, one person’s story is obviously not an example for the entire community. But I identify as a transgender man and as a nonbinary individual, which means I’ve never identified only as a girl or only as a boy—I’ve always identified as both. I wear men’s clothing, though I do have a closet full of five-inch high heels that I absolutely love and will never get rid of.

Growing up I always felt different from other girls and I couldn’t put my finger on why. Maybe it was a lack of representation of trans people in the media. And I didn’t see it growing up in a small town, so being transgender wasn’t an option, as far as I knew.

Not all transgender people decide to transition physically, but I decided to when I was 34 years old. It took me that long, and you know what got me there? The book The Alchemist: This talk of personal legend and embodying that, that’s what woke me up. I got a ton of support from the yoga community—I do yoga every day—and from the LGB and trans communities. Unfortunately my best friend stopped talking to me, and another dear friend changed how she acted toward me.

“I had this fear that they were going to know I have a vagina. It took me a couple of weeks to realize no one in the men’s bathroom cares.”

I probably started going into the men’s room when I was about six months into my physical transition, which is taking testosterone. I made my decision based on how I was being perceived in society. As soon as my voice got low and I was starting to be seen as male, that’s when I started going to the men’s bathroom. I was scared shitless. It was gross in there. It was liberating and scary. I had this fear that they were going to know I have a vagina. It took me a couple of weeks to realize no one in the men’s bathroom cares; there’s no way to know I wasn’t born with a biological penis.

The day HB2 became law, I was there to testify in front of the Senate, and I had my speech prepared. I was sitting there listening to the senators talk about how important this bill is and how it would protect women and children. If they really cared about women and children, Republicans would actually do things to help women and children, rather than making up some story about an imagined bogeyman walking into a women’s bathroom dressed in women’s clothes to rape women and children. It was absurd. I felt like I didn’t exist, like I wasn’t an equal human.

Afterward I was sitting down with my girlfriend at brunch and I asked her: Where do I go to the bathroom now? It’s literally against the law for me to use the men’s room, and it’s also risky. Even though I’m more than a year on testosterone—I’m getting facial hair, my hair has receded a little—I still don’t always pass as male. Or do I use the women’s room, follow the law, and clearly make people uncomfortable? We started going through the different examples of what would happen, what could happen, and she started crying because it became clear to her that I was at risk for getting hurt.

“I’m afraid to leave the bathroom and to be met by that woman’s boyfriend or husband.”

The first time I went back into a women’s bathroom, I was so nervous. I’m still nervous. I’ve created these cards—I keep them in my wallet. One time I was in a bathroom at a government center in Charlotte, and a woman asked what I was doing there. I tried handing her the card but she didn’t want to take it, she walked away. I saw her later in the hallway, and I said, “I didn’t mean to startle you.” She looked at me and said, “I hope I never make that mistake again.” I have no idea what she meant—I don’t think she knew what it meant to be a transgender man. And then the other day someone gave me a hug after I gave her my card. I don’t know if she recognized it because it’s been viral.

But here’s what I’m most afraid of: When they don’t say anything and just ignore me and leave, I’m afraid to leave the bathroom and to be met by that woman’s boyfriend or husband or an authority figure. Because I could easily be socked.

The senators who wrote this bill made it a lot more difficult for transgender people, because a lot of them have the gender on their driver’s license changed, but not their birth certificate. If I wanted to do that, I’d have to fly back to Michigan. Some of my friends would have to fly out of the country. Some people, depending on the state, have to go in front of judge, and some judges are not going to be cool with allowing a transgender person to make the change.

“This bill gives people permission to be bigots.”

Last night I reached out to two really close transgender women friends who are people of color, because I’m worried about them, and they are both scared—they feel unsafe. I’m scared, yeah, I’m at risk, yeah, but not as much as them. They were already at risk before this bill, they were already a target, and now it’s multiplied. And that’s the thing that really upsets me—that this bill gives people permission to be bigots.

HB2 isn’t just about bathrooms. It’s stripping away all city ordinances that are in place to protect marginalized folks. Women, including those who aren’t transgender, are starting to realize this affects them, too. It puts all of us at risk unless you’re a white man. And who wrote the bill? White men. Isn’t that interesting?