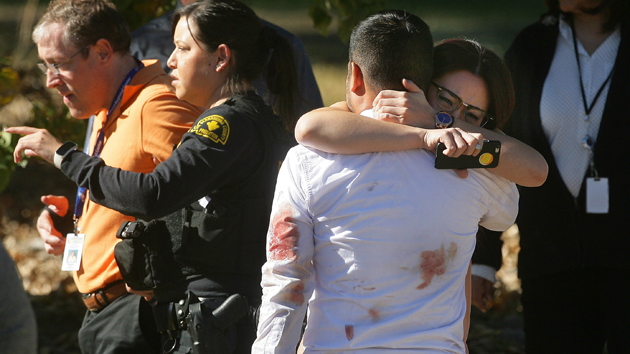 In the aftermath of the recent scourge of mass shootings—from San Bernardino to Colorado Springs to Charleston—as well as attacks aimed at Black Lives Matter protesters, many have asked why the media and public officials have been hesitant to call the suspects “terrorists.”

“We’re not sure if this is a terrorist incident” means “We do not know the race and religion of the shooters at this time.” #SanBernadino

In a press conference on Wednesday, San Bernardino Police Chief Jarrod Berguan said, “We have no information at this point to indicate that this is terrorist-related, in the traditional sense that people may be thinking. Obviously, at a minimum, we have a domestic terrorist-type situation that occurred here.”

By definition, a terrorist is a person who uses violent acts to achieve political ends. So do major news outlets have protocols on when to use the words “terrorism” and “terrorist”? And does the media use them in a biased way? We reached out to the New York Times, the Washington Post, the Associated Press, and NPR to hear how they approach the issue. Here are shortened versions of what they said:

The Times doesn’t have any “official” definition of terrorism. Unlike the U.S. government, we don’t have some kind of formal process of labeling terrorists, and I don’t think we need one. It’s probably not surprising that “terrorism” and related terms are likely to be used more often for attacks connected to well-known, long-standing, recognized terrorist organizations like ISIS or Al Qaeda—events like the Paris attacks, for instance. But in fact The Times has often used “terrorism” in connection with white supremacist attacks and other cases of domestic extremism, going back to Timothy McVeigh and beyond. A quick check shows that we used it in several stories in the Charleston coverage. The main point is, we try to report the facts accurately and fairly, in language that is clear to our readers. We are not working with predetermined categories or official terms or definitions. (When I’m in doubt, I generally turn to the dictionary).

We don’t have a rigid protocol. Given the range of potential circumstances, we make judgments on a case by case basis. We’ve used “terrorism” and “terrorist” for both domestic and international acts of violence. For U.S. incidents, we have used the phrase “domestic terrorist” or “domestic terrorism.”

We generally avoid the terms because we prefer to describe more specifically what the individuals in question have done.

In each case, there are talks about the right ways to describe what has happened. That may change in the first few hours or days as more information comes in. “Murder” or “terror” or “hate crime”—all those words start percolating in the back of your mind, but it’s always best to stick to the facts and stick to the action words as information is still coming in before trying to apply labels. Now, there comes a point where it’s clear one way or the other in many of these cases. It became clear pretty quickly in Paris that this was something more than “simple” crimes. You had a lot of eye witness reporting about what was said by the attackers, how they operated, and the coordinated nature of the attacks. The targets were civilians—often an important consideration when deciding whether something is or is not terrorism.

Some of the threshold questions you have to start looking at and trying to answer: Is there evidence that it was a political motive? Is there evidence or indication that one of the motives was to strike terror in some sort of an attempt to force change, either in government or policy?

…[Regarding the shooting in Charleston] I don’t think newsrooms have settled on that one yet. Did he have political motives or was it a hate crime—a racially motivated crime? We’ll find out when the trial gets going whether he really did think he was going to start a race war.

Part of the media’s job is to lay out the facts. Labels are interesting but they sometimes aren’t helpful and they can get in the way.