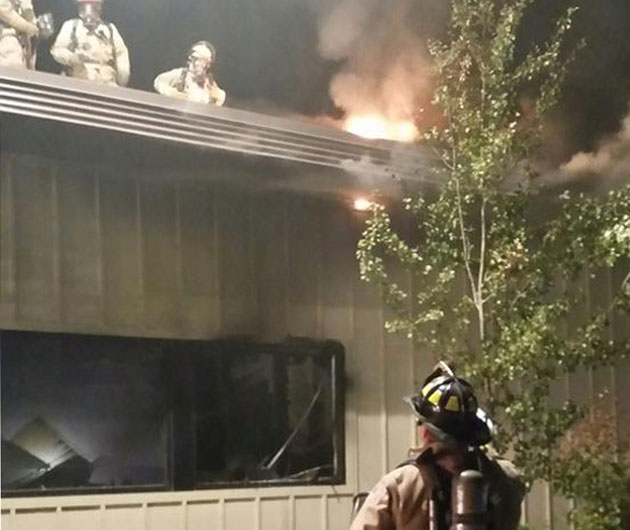 Three people were shot dead and nine others were injured Friday at a Colorado Springs Planned Parenthood clinic, the first time since 2009 that anyone has been killed in an incident linked to activity at an abortion clinic. The attack comes amid an exponential increase in threats and violence against abortion providers since the release of a series of viral—and widely debunked—videos.

While police have not discussed the alleged motives of the suspect, who has been arrested, the attack began at the clinic. According to authorities, the gunman entered the facility Friday afternoon and began shooting. During an hours-long standoff, he exchanged fire with police, killing one officer.

Since the release of the Center for Medical Progress’ videos that purport to show Planned Parenthood selling fetal issue, harassment, threats, and attacks against abortion providers, their staff, and facilities have surged dramatically across the country, according to new numbers from the National Abortion Federation.

“We have been quite worried that this increase in threats would lead to a violent attack.”

The clinic attacked on Friday is part of the Planned Parenthood Rocky Mountains affiliate, which was featured in the Center for Medical Progress’ videos.

“Since the series of highly edited, misleading anti-abortion videos was released in July, we have seen an unprecedented increase in hate speech and threats against abortion providers,” says Vicki Saporta, the president and CEO of the National Abortion Federation, which has been tracking violence against providers since the 1970s.

“We have been quite worried that this increase in threats would lead to a violent attack like we saw” on Friday, she added.

The Federation is suing Daleiden and the Center for Medical Progress for allegedly setting up a sham biomedical organization and misrepresenting their identities in order to gain access to and record a federation meeting.

Abortion providers have grappled with harassment and threats for years, but the tide of vitriol began rising dramatically in July, after the first video was released. Soon after that, an anonymous reader posted a message on Fox Nation’s website.

“I’ll pay ten large to whomever kills Dr. Deborah Nucatola. [She] should be summarily executed. I’ll do it myself if no one else does.” A month later, another physician, Dr. Savita Ginde, came home to find 50 people protesting outside her door. They left fliers around her neighborhood that said, “Savita Ginde Murders Children.”

Nucatola and Ginde both work for Planned Parenthood and were featured in videos surreptitiously recorded by the Center for Medical Progress. They are among a handful of abortion providers who have been catapulted into the public eye by the group and its public face, David Daleiden. But harassment has not been limited to the providers spotlighted in the series—the first video of which has received more than 3 million views on YouTube.

Violence against reproductive health clinics dates back to at least Roe v. Wade, when anti-abortion animus swelled in reaction to the 1973 landmark Supreme Court case. In 1982, an Illinois-based provider and his wife were kidnapped, and three clinics in Florida and Virginia were bombed in the same year. In 1984 there were more than 25 cases of bombings and arson attacks across the country.

Coordinated attacks reached a fever pitch in the early 1990s. Anti-abortion activists, led by Operation Rescue—a group whose president, Troy Newman, is also currently the secretary of the Center for Medical Progress—created large-scale human blockades in major cities across the United States. These protests prevented anyone from leaving or entering clinics, which led to hundreds of arrests by law enforcement.

Meanwhile, the number of violent incidents also increased, and in 1993 Dr. David Gunn was shot and killed in the parking lot of a clinic he worked at in Pensacola, Florida. Gunn had been the subject of wanted-style posters distributed by Operation Rescue. In 1994, an abortion doctor, a clinic escort, and two receptionists were killed in two separate incidents.

Congress enacted the Freedom of Access to Clinic Entrances Act in 1994, making it a federal crime to injure, intimidate, or interfere with abortion providers or those seeking their care. But in January 1998, an abortion clinic security guard was killed during a bombing at his workplace. And in October, abortion doctor Barnett Slepian was murdered in his home.

Two weeks after Dr. Slepian’s death, Attorney General Janet Reno created the Task Force on Violence Against Health Care Providers, led by the Civil Rights Division of the Department of Justice and staffed by investigators from the FBI and other federal agencies. Violence plummeted in the years following the clinic access law and the creation of the task force. According to the FBI, in 2012 violations of the clinic access act made up only 2 percent of the bureau’s civil rights cases.

But harassment, threats of violence, and attacks against clinics have gone up again following the release of the Center for Medical Progress’ videos in July, according to recent National Abortion Federation court filings. That month, incidents of harassment against Planned Parenthood facilities increased ninefold compared with June, and those numbers continued to rise through August.

In the four months following the release of the videos, there have been at least four suspected arsons that targeted abortion clinics, compared with just one in all of 2014 and none in 2013. There have been at least five cases of vandalism since August. In comparison, there were 12 total cases of clinic vandalism in all of 2014 and just five cases in 2013, according to federation figures.

In one of the recent vandalism cases, a young man entered a Planned Parenthood in New Hampshire and destroyed medical equipment, phones, and computers. This month, an unidentified person smashed the windows of Kentucky’s only full-time abortion provider, twice in three weeks.

Anne, the executive director of the clinic, who declined to give her last name for security reasons, told Insider Louisville that in its 20 years of operation, the clinic had never before been vandalized.

The last slaying linked to activity at an abortion clinic was in 2009, when Dr. George Tiller was murdered at his church in Wichita, Kansas.

The deaths of three people at the Colorado Springs Planned Parenthood on Friday were the first slayings linked to an abortion clinic in six years. The last was in 2009, when the abortion provider Dr. George Tiller was murdered at his church in Wichita, Kansas. Scott Roeder, who was found guilty of Tiller’s murder, said he shot the doctor because “preborn children’s lives were in imminent danger.”

The FBI has also reported an increase in the number of attacks on reproductive health care facilities across the country since the videos were released in July. A spokesperson from the FBI was not immediately available for comment.

The project, which is a program of the Feminist Majority Foundation, has trained clinic escorts and helped clinics increase security with surveillance cameras, alarm systems, bulletproof glass, and vests. When Gaines spoke with Mother Jones earlier this month, she said “the trifecta of efforts excoriating, and inspiring individuals to go out and target providers by demonizing them” leaves providers vulnerable, and that they were lucky no one had yet been hurt.

“But we fear that may be around the corner,” Gaines said at the time.

The violence is intended to silence providers and drive them away from their jobs, but officials from the National Abortion Federation and the National Clinic Access Project say women should feel safe going to clinics. Law enforcement agencies are aware of the issue, they added.

Indeed, the number of abortion providers decreased 38 percent between 1982 and 2000 and continues to decline today. According to research from an anti-abortion group, the number of surgical abortion clinics dropped to 582 in 2013, down from more than 2,000 clinics in the early 1990s. And in the last two years, surgical abortion clinics have been closing at a rate of 1.5 clinics every week.

And though it’s hard to pinpoint every cause for the decline, “stigma and fear of violence…are powerful barriers to abortion provision,” according to the American Congress of Obstetricians and Gynecologists.

For some abortion doctors, violence only deepens their resolve to provide abortion care. LeRoy Carhart quit doing surgery and opened his abortion practice in 1991 after a massive fire on his family’s 65-acre Nebraska farm. The day after the fire, Carhart said he received a letter that said the abortions made his property a target for the fire. No one was ever convicted.

The physician now operates a clinic in Nebraska and travels to Maryland each week to perform abortions. For security reasons, he says he avoids staying in the same hotel twice and tries to take different routes to work.

“After the fire, it totally changed everything. That’s when we decided to just do abortions full time,” Carhart said, “It was my way of getting back.”