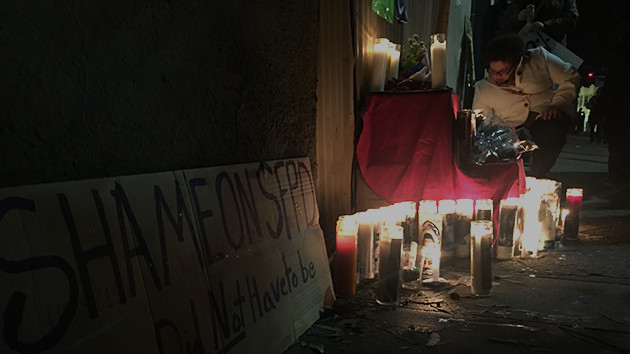 People gathered at a vigil for Mario Woods on December 3, 2015Jaeah Lee

Dozens of people gathered at a candlelit vigil on Thursday night in San Francisco, at the spot where 26-year-old Mario Woods was killed by police the day before. Woods, who is black, died in a hail of bullets fired by San Francisco Police Department officers on Wednesday afternoon in the city’s Bayview district. Police identified him as the suspect in an attack whose victim was apparently stabbed in the shoulder but is expected to survive. Police officials said Woods was wielding a kitchen knife that he refused to relinquish even as officers ordered him to drop it, fired bean bag pellets, and pepper-sprayed him.

The moments leading up to the shooting were captured on several widely circulated videos recorded on cellphones. In one, Woods can be seen standing with his back against a wall, surrounded by police whose guns are drawn. When Woods begins to walk away, an officer steps in his path, and within seconds a series of shots rings out. SFPD Chief Greg Suhr told reporters that a total of five officers opened fire. (Warning: graphic images)

Woods died at the scene. A resident who lives next to the site of the shooting told Mother Jones that he counted at least 36 shell casings on the sidewalk after the violence was over. Another angle also captured the shooting (graphic).

Another angle from yesterday’s police shooting in Bayview (SF)

This was taken by one of my students who lives a block away.

SF Weekly reported that Woods had been a gang member in 2009 and had previously served prison and jail time for possession of a firearm by a felon. Woods’ mother, Gwendolyn, told ABC7 News that her son had suffered from mental health issues but was getting through them. “He just needed some help,” she said. “He fought past them.” She told interviewers that her son had “gotten his uniform” for his new job with the United Parcel Service that he was slated to begin the day after he died.

Neighborhood residents where Woods was shot questioned the level of force used to subdue him.

“They had six officers against this one little guy,” area resident Cedric Smith told the San Francisco Chronicle. “They could have used batons. They could have backed off. They didn’t need to shoot him.” And Chemika Hollis, another resident, wondered why police officers shot him so many times. “How can you feel a threat when you have 10 cops around you?” she said.

Thursday’s vigil was set up on the spot where Woods was gunned down, with pictures of him, candles, and a sign posted to the wall reading, “Black Lives Matter.” A few blocks away from the vigil, dozens more gathered at a community meeting in the St. Paul of the Shipwreck Catholic church, while others held a peaceful protest outside. 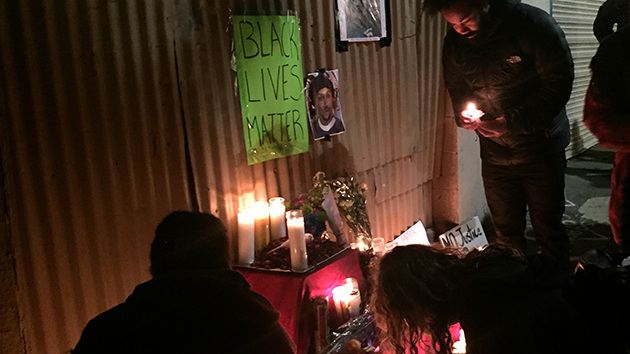 San Francisco Police Chief Greg Suhr has said the officers were justified in shooting Woods, and he promised a thorough investigation.

“It’s a tragic loss anytime somebody dies. We never want to do that,” he told reporters after the shooting. “But this is all they could do. I really don’t know how much more you can make it plain to a wanted felon that he should drop the knife.”