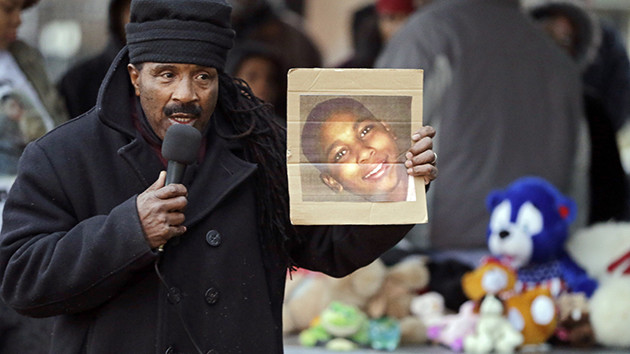 Activist Art McCoy holds a photo of Tamir Rice before a 2014 protest march at Cudell Park in Cleveland. Mark Duncan/AP

Update, 1:45 p.m. EDT: In the hours since two new investigations into the fatal police shooting of 12-year-old Tamir Rice concluded that a Cleveland police officer’s actions were “reasonable,” outrage has spread on Twitter and protesters have taken to the streets. Some called on authorities to redefine what is legally “reasonable.”

Activists in Cleveland and elsewhere saw the reports as a sign that it’s unlikely Cleveland police officer Timothy Loehmann will face criminal charges for his actions. As demonstrations took place in cities such as Cleveland and Oakland, several high-profile figures weighed in:

Sending support to Tamir Rice’s loved ones. Too many black families are mourning the loss of a child. We need to change that reality. -H

The Legal Murder Of Tamir Rice – The Atlantic @tanehisicoates http://t.co/rZYpRYG634

Meanwhile, a police union attorney for Frank Garmback, the officer who drove the squad car near Rice before Loehmann opened fire, told Mother Jones that Garmback has decided that he will not testify before the grand jury.

Garmback is still considering submitting a written statement to Cuyahoga County prosecutor Timothy McGinty, according to his lawyer Michael Maloney.

“While we are not facing a strict deadline at the moment, it is clear we have to advise the prosecutor of our intentions fairly soon,” Maloney said. He declined to comment further on questions about whether Loehmann would testify or submit a statement soon.

Late on Saturday night, the Cuyahoga County prosecutor’s office released conclusions from three additional investigations into the death of Tamir Rice, a 12-year-old boy who was shot and killed by a police officer at a Cleveland park last November.

Two of the reports, written by police use-of-force experts, determined that the actions of Cleveland officer Timothy Loehmann, who fatally wounded Rice within a few seconds of arriving at the scene on November 22, were “objectively reasonable” under federal case law and did not violate the Fourth Amendment. A third investigation reconstructed the shooting scene at the Cudell Recreation Center and examined how quickly the police car was moving when it pulled up to Rice.

Here are the key takeaways from the reports, and questions that remain almost a year since Rice’s death:

The fact that Rice was a kid, or that his gun turned out to be fake, are “irrelevant” in determining whether Loehmann’s actions were reasonable under federal law. According to use of force experts S. Lamar Sims and Kimberly Crawford, the available evidence shows Loehmann could not have known at the time of the shooting that Rice was a boy with a toy gun. Therefore Loehmann acted reasonably—as defined by previous US Supreme Court decisions—when he fired his weapon at Rice, Sims and Crawford concluded. And while key details in the 911 call—that Rice was “probably a juvenile” waving a gun that was “probably fake”—were not relayed to the officers, they “cannot be considered,” Crawford wrote.

Whether Loehmann and the officer who drove the squad car, Frank Garmback, used appropriate tactics also fell outside the scope of Sims and Crawford’s investigations, they said. Garmback pulled the police vehicle to within several feet of Rice, and Loehmann fired shots within two seconds.

“To suggest that Officer Garmback should have stopped the car at another location is to engage in exactly the kind of ‘Monday morning quarterbacking’ the case law exhorts us to avoid,” Sims wrote. While it could be argued that the officers escalated the situation “by entering the park and stopping their vehicle so close to a potentially armed subject,” Crawford added, that speculation has “no place in determining the reasonableness of an officer’s use of force.”

The reports do not discuss the fact that Loehmann and Garmback did not administer first aid while Rice lay bleeding. Surveillance footage of the incident showed Loehmann and Garmback stood around for about four minutes without attempting to give any medical attention to Rice. When Rice’s sister approached, Garmback tackled her to the ground. Later, an FBI agent arrived and began to tend to Rice’s wound before an ambulance took him to a hospital. Rice died the next day.

A fundamental principle of policing is that once a threat has been eliminated and a scene secured, an officer’s first priority is to aid an injured person, Seth Stoughton, a law professor at the University of South Carolina studying policing, told Mother Jones in May. “At that point, the officer and his medical kit might be the only thing between the suspect and death,” said Stoughton, who who previously served as a police officer in Florida for five years. “It’s not only an ethical requirement, but almost certainly a departmental imperative to do what they can to save the life of the suspect. The failure to do that is really disturbing.”

The officers still aren’t talking to investigators. Both Loehmann and Garmback have declined to give statements to investigators or the county prosecutor, under the advice of their lawyers. In June, their attorney Michael Maloney told Mother Jones that the officers “have not ruled out the possibility” of providing a written statement to the prosecutor. They have not decided whether they will testify before the grand jury.

It’s unclear whether Loehmann will face criminal charges. A total of four investigations have now been made public in the wake of Rice’s death, none of which are intended to draw conclusions about whether officer Loehmann should be charged. As county prosecutor Timothy McGinty explains, all reports will be reviewed by a grand jury, which will then determine whether Loehmann will face criminal charges.

The officer who drove the car may face scrutiny, too. Thus far, the investigation into Rice’s death has focused on Loehmann, and it remains unclear whether the actions of Garmback will warrant a separate criminal or departmental investigation.

Stoughton, the law enforcement expert, told Mother Jones, “It was a ludicrous way to approach a scene where you’ve been told that there is a person with a gun who has been aiming it at bystanders. I would expect the officers would park at a safe distance and walk up, using cover and concealment, and try to initiate communication at a distance. That’s the ‘three Cs’ of tactical response.”

It’s unclear when a grand jury will take up the case. The new documents, along with the initial probe into the shooting led by the county sheriff’s office, will be presented to a grand jury as it decides whether to indict Loehmann, McGinty said in Saturday’s press release. McGinty’s office declined to comment further on the grand jury process. It remains unclear whether a grand jury has been impaneled and when a hearing will take place.