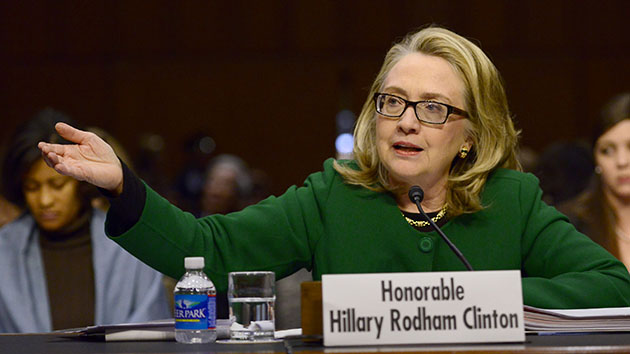 Hillary Clinton testifies before the US Senate Committee on Foreign Relations in January 2013.Ron Sachs/ZUMA

Hillary Clinton is set to testify before the House Select Committee on Benghazi this Thursday, her first confrontation with congressional Republicans since she announced her presidential bid earlier this year.

This face-off has been brewing all year. Republicans had initially viewed dragging Clinton before the committee as a prime opportunity to tar her as a scandal-ridden politician. But with the hearing date approaching, Clinton seems more eager than ever to square off against Congress, with the candidate and her surrogates regularly attacking the committee as a waste of taxpayer funds ($4.5 million and counting) designed solely to derail her campaign.

What’s all the hubbub going to be about? Let us explain:

Back up to the beginning. What is the Benghazi committee? Ever since four American diplomats (including Ambassador Christopher Stevens) were murdered in Libya in 2012, Republicans in Congress have searched for an explanation for the attacks that can be used to discredit Democrats. First they tried to paint the security failures as Obama’s fault; after Obama won reelection, they attempted to pin the problems on Clinton. The latter quest has gone through several iterations. It started with investigations into the concerns around embassy security across the world, then veered into claims that Obama or Clinton told troops to stand down, questions on what Clinton was up to at the moment of the attack, and disputes about Obama administration officials’ use of the word “terrorism.”

Republicans had previously used their perches on the foreign relations committees in the House and Senate to explore possible misdeeds surrounding the attack. But when those all failed to turn up any serious allegations of high-level misconduct, soon-to-be-departing House Speaker John Boehner created the special committee in May 2014. Last month, the committee’s drawn-out inquiry officially became the longest congressional investigation ever, outlasting Watergate.

Enough with the past. Who’s going to be grilling Clinton this week? The committee is chaired by Rep. Trey Gowdy of South Carolina, who has struggled to keep his committee focused over the past month as a string of missteps has backed up Democrats’ frequent assertions that the committee is nothing more than an exercise in politicking.

Now what exactly is the basis for these assertions? First, Rep. Kevin McCarthy of California, Boehner’s heir apparent as House speaker, ruined his chances at leading the party when he went on TV and bragged about how the committee had damaged Clinton’s political ambitions. “What are her numbers today?” he said. “Her numbers are dropping. Why? Because she’s untrustable. But no one would have known that any of that had happened had we not fought to make that happen.” McCarthy later backtracked, but fellow Republican Rep. Richard Hanna of New York stood by the sentiment, saying last week, “This may not be politically correct, but I think that there was a big part of this investigation that was designed to go after people—an individual: Hillary Clinton.”

Gowdy warned recently that Clinton’s emails had included classified information on a CIA operative—an accusation that Democrats on the committee said over the weekend had been refuted by the CIA. But Gowdy himself may have been guilty of the same type of misstep, when his staff publicly revealed the name of the CIA ally in Libya during Gowdy’s dispute with the Democrats on the committee.

Gowdy and the committee must also be looking into other aspects of the attack on the Benghazi consulate beyond just Clinton. Right? Not really. The House Intelligence Committee already released a comprehensive report on the attack last year that refuted the major allegations of misconduct on the part of White House officials (while still pointing to broader issues around the lack of adequate security). Last week, a Republican former committee staff member told CNN that he was fired from his role as an investigator when he objected to the committee’s obsession with digging solely into Clinton’s role rather than looking more broadly into the Benghazi attack.

Has Clinton talked about this before? She most certainly has. Beyond discussing the attacks in past interviews and writing about them in her State Department memoir, Clinton delivered hours of testimony in the House and Senate. The hearings mostly went smoothly for Clinton, apart from an unartful exclamation (“What difference does it make?”) in response to questions about whether the Benghazi attack was premeditated or derived from a spontaneous protest over a cartoon.

Aren’t these hearings really about Clinton’s emails? You’d be hard-pressed to know it amid the email hoopla of this summer, but litigating whether Clinton transgressed by turning down a work account to house her email correspondence on a private server isn’t the actual purpose of the Benghazi committee. That private email server only came to public attention because the committee was searching for the former secretary of state’s correspondence related to the attack. Gowdy reportedly wanted to pass off investigating Clinton’s email practices to another committee, but Boehner kept the matter under the Benghazi committee’s purview, ensuring that a panel once purportedly seeking an explanation for the deaths of Americans abroad has been largely retooled as a political witch hunt into the online habits of the likely Democratic nominee.

Zany. So why is Clinton so confident as she heads into her testimony? Gowdy wanted to interrogate Clinton behind closed doors, but the former secretary of state insisted that the testimony be delivered in public. The Clinton campaign had long said the October hearing would be her best chance to put the email scandal largely to rest. She hopes to frame it as a Republican political maneuver, with TV cameras recording the exchange. (As her debate performance reminded pundits last week, Clinton is skilled at verbal sparring with opponents.) McCarthy’s blunt honesty about the political nature of the committee made Clinton’s task that much easier.

Is this last item here just to complete the acrostic? Yes. Yes it is.