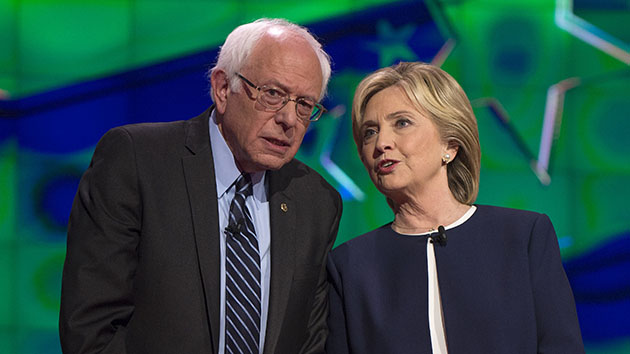 The Democratic presidential contenders met in Las Vegas Tuesday night for the first of six debates. With just four of those debates scheduled to take place before Iowans cast the first presidential primary votes in February, this was Sen. Bernie Sanders’ moment to show that he should be treated as a serious challenger to Hillary Clinton—and a rare chance for former Virginia Sen. Jim Webb, former Rhode Island Gov. Lincoln Chafee, and former Maryland Gov. Martin O’Malley to move out of “Who’s That Dude” terrain.

It was generally a friendly affair, with the candidates largely agreeing on the major issues. But a few fault lines popped up. Neither Sanders nor O’Malley agreed with Clinton’s suggestion that there should be a no-fly zone over Syria, and both of those upstart challengers also questioned Clinton’s commitment to challenge Wall Street.

Here were some of the debate’s best moments:

Clinton: “Save capitalism from itself.”

After quizzing Sanders on whether he is a capitalist (he identifies as a democratic socialist), moderator Anderson Cooper opened the question up to the rest of the Democratic contenders, asking if there was “anybody else on the stage who is not a capitalist?” Clinton eagerly jumped in. “I don’t think we should confuse what we have to do every so often in America, which is save capitalism from itself. And I think what Senator Sanders is saying certainly makes sense in the terms of the inequality that we have,” she said. “And it’s our job to rein in the excesses of capitalism so that it doesn’t run amok and doesn’t cause the kind of inequities we’re seeing in our economic system. But we would be making a grave mistake to turn our backs on what built the greatest middle class in this country.”

Sanders: “I’m not a pacifist.”

Cooper asked Sanders, a conscientious objector during the Vietnam War, whether he is qualified to be commander in chief. In response, Sanders stressed his history of fighting for veterans’ benefits and his own willingness to go to war as a last resort.

“I am not a pacifist, Anderson. I supported the war in Afghanistan. I supported President Clinton’s effort to deal with ethnic cleansing in Kosovo. I support airstrikes in Syria and what the president is trying to do. Yes, I happen to believe from the bottom of my heart that war should be the last resort that we have got to exercise diplomacy. But yes, I am prepared to take this country into war if that is necessary.”

“Enough of the emails.”—Not the candidate you’d expect.

Cooper sure wanted to make a big deal about Clinton’s email scandal. Right after the first mid-debate commercial break, Cooper jumped into questioning Clinton’s email practices, wondering whether they showed a level of poor judgment that should trouble voters. After Clinton dismissed the email questions as a trumped-up Republican scandal, Sanders piped up. “Let me say something that might not be great politics, but I think the secretary is right,” Sanders said. That whole email kerfuffle? Bernie was having none of it. “The American people are sick and tired of hearing about your damn emails,” he said, sharing a handshake and smile with his opponent.

After Clinton and Sanders both agreed that the email scandal had become a sideshow, Chafee challenged Clinton on the email issue, saying the highest ethical standards should be a prerequisite for the next president. Next, Cooper turned to Clinton.

“Secretary do you want to respond?” Cooper asked.

Is Sanders tough enough on guns?

Sanders and Clinton had their biggest rumble Tuesday night over gun control. Sanders defended his votes in Congress against gun control measures. When Clinton got a chance to weigh in, she did not go easy on her rival. Cooper asked her, “Is Bernie Sanders tough enough on guns?”

“No, not at all,” Clinton responded. “Senator Sanders did vote five times against the Brady bill. Since it was passed, nearly 2 million illegal purchases have been prevented. He also did, as he said, vote for this immunity provision. I voted against it. I was in the Senate the same time. It wasn’t that complicated to me. It was pretty straightforward to me that he was going to give immunity to the only industry in America—everybody else has to be accountable, but not the gun manufacturers, and we need to be able to stand up and say enough of that, we’re not gonna let it continue.”

When Chafee was asked why he voted to repeal Glass-Steagall—the Depression-era law separating commercial and investment banking that was overturned in 1999—the former senator couldn’t muster more than ¯\_(?)_/¯ to explain his vote. Chafee tepidly said he didn’t really know what he was voting for since he’d just arrived in the Senate, after being elevated to the post by Rhode Island’s governor after his father had passed away. “I think we all get some takeovers,” he said sheepishly.

“When people say that—it’s always the Republicans or their sympathizers who say, ‘You can’t have paid leave, you can’t provide health care.’ They don’t mind having big government to interfere with a woman’s right to choose and to try to take down Planned Parenthood. They’re fine with big government when it comes to that. I’m sick of it,” she said. The crowd applauded and she kept going.

Nevada is set to vote on legalizing recreational marijuana in 2016. CNN’s Juan Carlos Lopez asked Sanders if he would vote to approve the initiative if he were a Nevada resident. Sure, Sanders replied. “I think we have to think through this war on drugs that has done an enormous amount of damage.”

What about Clinton? She’s still in a wait-and-see mode, happy to watch as states conduct their own experiments without legalizing weed nationwide, at least for now (though she is in favor of laws in favor of medical marijuana). Considering it another issue that she might be evolving on.

Each candidate described what they believe is the greatest security threat to the United States. For Chafee, it is the turmoil in the Middle East, which he says began with the Iraq War. O’Malley said a nuclear Iran; Clinton said nuclear proliferation; Webb mentioned China, cyber warfare, and the Middle East. But Bernie Sanders ran away with the question: climate change.

“The scientific community is telling us that if we do not address the global crisis of climate change—transform our energy system away from fossil fuel to sustainable energy—the planet that we’re going to be leaving our kids and our grandchildren may well not be habitable,” he said. “That is a major crisis.”

Jim Webb: I killed a dude, what have these chumps done?

Cooper lobbed one last, seemingly lighthearted question at the candidates before their closing statements: Which person are you proudest to have made an enemy of? Chafee said the coal lobby, O’Malley said the NRA, Sanders listed Wall Street, and Clinton touted how much Republicans hated her.

But Jim Webb. Ohhhhh boy. He turned nostalgic, looking back on his tour in Vietnam, during which he won a Navy Cross in a true act of heroism. But his method of boasting about that was…awkward. “I’d have to say the enemy soldier that threw the grenade that wounded me,” Webb said, with a smile creeping onto his face, “but he’s not around to talk to.”