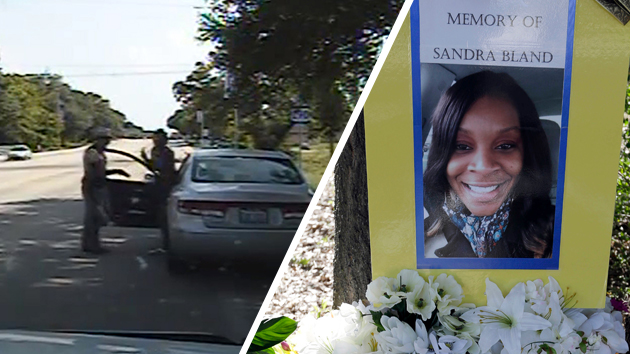 On the left, Sandra Bland is seen exiting her car after a routine traffic stop on July 10. Flowers, right, adorn a memorial for Bland near Prairie View A&M University, on Tuesday.Pat Sullivan/AP

After Tuesday’s release of police dashcam footage capturing the arrest of Sandra Bland, the 28-year-old from Illinois who was found dead three days later in police custody, questions swirled on social media about apparent glitches and loops in the footage, and whether or not Bland should have been taken into custody in the first place.

A number of reports have now detailed the alleged cuts. In one section, for example, a man can be seen walking from a tow-truck towards the police cruiser. Seconds later, the footage is repeated, while the audio continues seemingly unbroken underneath.

Texas police have now told Mother Jones that the 52-minute video of Bland’s was not deliberately edited, and that the glitches were the result of a YouTube upload error. “Some of the video that occurred during this conversation was affected in the upload and is being addressed,” said Texas Department of Public Safety spokesman Tom Vinger, by email. He added that the agency asked the FBI to examine the footage to ensure its integrity, prior to the video’s release. (In a July 17 statement, DPS says that officials asked the FBI to “conduct a forensic analysis” of the footage.) He didn’t elaborate about the specific glitches, nor the apparent mismatch between audio and video.

In the video taken on July 10, a state Department of Public Safety trooper—later identified as Brian Encinia—can be seen approaching Bland’s Hyundai during a routine traffic stop. When Encinia asks Bland to put out her cigarette, she refuses, and the officer orders Bland to get out of her car. When Bland argues with the officer, Encinia opens Bland’s door, reaches in, and forces her out. Department of Public Safety Director Steven McCraw has admitted that Encinia violated department policy and had been reassigned to desk duty pending the investigation into Bland’s death.

Meanwhile, the dashcam video has raised further questions about whether or not Encinia’s conduct was lawful. Mother Jones has asked the Department of Public Safety for comment on the following questions, and will update this post when they respond:

According to the statement issued to Mother Jones, the Texas DPS is preparing to release a new version of the dashcam recording, presumably without the glitches in the video, and DVDs will be available to the media late Wednesday morning.