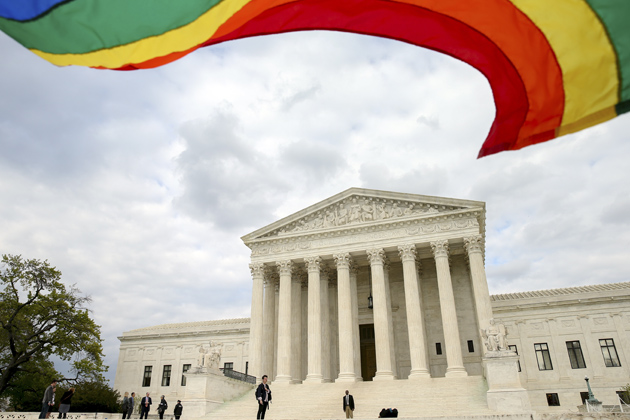 On Monday morning, 47,000 people visited SCOTUSblog.com for live coverage of the Supreme Court’s latest rulings. Generally the court’s proceedings aren’t such a spectator sport, but with the final days of its current term upon us, blockbuster decisions on same-sex marriage and the fate of Obamacare are just around the corner. The trouble is that no one knows when they will drop, who is writing the opinions, or, of course, what the outcomes will be. The knowledge that something big is on its way—along with the ignorance as to what and when—creates a perfect storm of frenzied guessing among the press, attorneys, and court obsessives.

As we await the final opinions of the term—which will come Thursday, Friday, and next Monday—here’s what we know and don’t know about how the court hands down its decisions.

When does SCOTUS release opinions? When they are ready. After oral arguments on a case, one justice is assigned to write the majority opinion of the court, although any justice can choose to write a concurring opinion—that is, an opinion that reaches the same conclusion as the majority, but for different reasons. If the opinion is not unanimous, another justice is assigned to write on behalf of the dissenting justices, but again, any justice can write an additional dissent. Often, judges concur with part of a decision and dissent from another part.

The justices then begin to circulate their drafts. Typically, the author of the majority opinion will first circulate a draft. Other justices can offer feedback and circulate concurrences or dissents. Each round of drafts builds on the previous rounds, and every justice writing has as long as he or she chooses to work on each draft. When the justices all agree the opinion is done, they notify the Reporter of Decisions, the office within the court that prepares the final version of opinions to release to the public. (The court actually takes years to release the final, authoritative version of its opinions in case books called the United States Reports.)

Before each term, which runs from October through June, the court releases a calendar of when it will meet and when it will hear arguments, which take place from October through April. (The calendar for the next term is already online.) Typically, the court releases any completed opinions before it hears oral arguments on Tuesdays and Wednesdays. In the final months of the term, however, when the arguments phase is over and the justices are focused on writing the remaining opinions, the court releases opinions on Mondays at 10 a.m. ET. In order to get all the opinions out by the end of the term, it’s typical for the court to add opinion-release days at the end of June, generally on Thursdays and Fridays.

Why are so many high-profile decisions expected to be released around the same time? From Obamacare to gay marriage to clean air regulations, the court is going to rule on some of its biggest cases in the next few days. Experts say that isn’t a coincidence. “We do know that the Supreme Court tends not to do very much on the really big and difficult cases of the term, until the hearings have been completed in late April,” SCOTUSblog‘s Lyle Denniston, who has been covering the court for more than 50 years, told Mother Jones in an email. “Then, it drives hard to get all of them out by the end of June. That has the effect, of course, of bunching up the major decisions in the final one or two weeks.” Additionally, cases that are politically charged are often more divisive and complex, so they take longer to complete.

How do you know which opinions will come down on which days?  You don’t. There is no prior notice of how many opinions, or which ones, will drop on any given day. In part, this is because the justices are often finalizing opinions until the last minute—perhaps the day prior. The justices likely want the option to press the pause button on releasing an opinion at any time without the public knowing that they had changed their minds or were continuing to quibble over a case. Some court experts also speculate that financial markets might be a consideration. If the outcome of a case could influence the price of a company’s stock, for example, it could be disruptive to announce ahead of time when that opinion is coming.

So there’s really no way to know what is coming on opinion days? Not really. But there are a few ways to read the tea leaves. The easiest mystery to solve is which opinions will come down on the final day of the term—this year, that’s Monday, June 29—because you can expect whatever the court has yet to release from the term. Technically, the court could hold a case until the next term or extend the term further into the summer, but that is rare. This process of elimination means that as the term progresses, you can start to narrow down when a particular decision is on the horizon. If it was argued earlier in the term, chances are it will be completed before cases argued later in the term, although cases that are more complex or controversial could also take longer to finalize.

Then how do people predict which opinions are coming and how the court will rule? The court is often unpredictable, but that hasn’t stopped court watchers from predicting anyway. It’s not impossible to guess which justice has which opinion, especially toward the end of the term. Here are some tricks people use.

A few Fridays per month, the justices typically meet to discuss recent oral arguments. The justices indicate how they plan to vote on those cases, although they can still change their minds, and have been known to do so on a few historic cases. In the 2012 case over Obamacare, for example, Chief Justice John Roberts famously changed his vote and decided to uphold the law. After each month’s arguments are complete, the most senior justice in the majority—often the chief justice—will then assign the majority opinions for the cases heard that month. For each month, the chief justice will aim to give every justice the same number of majority opinions to author. This information helps us deduce who is authoring which opinion. And we can look at that justice’s record on a certain issue, and what he or she said during oral arguments, to guess what the decision will ultimately be.

Reporters and observers scramble to look for the slightest clues as to what the justices will do—but it’s ultimately little more than a guessing game.

So, let’s look at a major case the court has yet to release this term. In Texas Department of Housing and Community Affairs v. The Inclusive Communities Project, the justices will decide whether the Fair Housing Act of 1968 outlaws housing policies that have a discriminatory effect on minorities. Civil rights advocates predict the court will ultimately gut this civil rights statute, partly based on the assumption that Justice Anthony Kennedy is writing the decision.

Here’s how the guesswork goes. This case is the only one heard in January that has yet to come down. Every justice except Kennedy has already issued a majority opinion from January. So the smart money says Kennedy is writing the opinion of the court in this case. Now let’s look at Kennedy’s record. In 2009, he wrote a significant opinion in which he ruled against the same type of liability at issue in the Fair Housing Act case. It’s not unreasonable, then, to guess that Kennedy will author a ruling against the long-standing housing protections in this case—although that’s just speculation.

There are additional clues on opinion day itself, accompanied by a last-minute rush to decipher them as the opinions begin to come down. First, before the opinions are read, court staff will bring boxes containing the opinions into the press room to be distributed to reporters when each opinion’s author announces his or her decision from the bench. Depending on how many boxes come into the press room, reporters can guess how many cases are about to come down.

Second, the justices announce opinions in reverse order of seniority. If the chief justice were to read the first opinion from the bench, you would already know that no other justice will be releasing an opinion that day.

Compared with presidential administrations and congressional offices, the court does an impressive job of containing leaks. That means that whenever decisions are about to be announced, reporters and observers scramble to look for the slightest clues as to what’s coming out, but it’s ultimately little more than a guessing game.