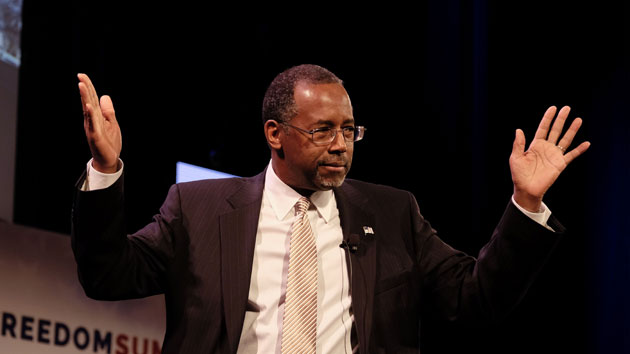 Former neurosurgeon Ben Carson rallied Republicans at the Iowa Freedom Summit on Saturday, stirring up speculation once more that the conservative activist will seek his party’s presidential nomination next year. Carson has never run for office and only recently registered as a Republican, but as the author of six books over more than two decades, he does have a considerable paper trail—and it’s starting to get him into trouble.

In his 1992 book Think Big, for instance, Carson proposed a national catastrophic health care plan modeled on federal disaster insurance, which would be funded by a 10-percent tax on insurance companies. He also proposed re-thinking best practices concerning end-of-life care, advocating for a “national discussion that would help us all rethink our culture’s mind-set about death, dying, and terminal illness”—similar to the provisions of the Affordable Care Act that conservatives now dismiss as “death panels.” (A Carson spokesman told BuzzFeed last week that the health care proposal is “as relevant to his view today as our current military action in Afghanistan is compared to our military strategy in Afghanistan two decades ago.”)

Although filled with inspiring stories of medical miracles and his own rough-and-tumble roots, Carson’s books also reflect the views of a social-values warrior whose anti-gay comments recently caused him to withdraw as a commencement speaker at Johns Hopkins University, his longtime employer. A sampling:

On intelligent design (from Take the Risk):

From what I know (and all we don’t know) about biology, I find it as hard to accept the claims of evolution as it is to think that a hurricane blowing through a junkyard could somehow assemble a fully equipped and flight-ready 747. You could blow a billion hurricanes through a trillion junkyards over infinite periods of time, and I don’t think you’d get one aerodynamic wing, let alone an entire jumbo jet complete with complex connections for a jet-propulsion system, a radar system, a fuel-injection system, an exhaust system, a ventilation system, control systems, electronic systems, plus backup systems for all of those, and so much more. There’s simply not enough time in eternity for that to happen. Which is why not one of us has ever doubted that a 747, by its very existence, gives convincing evidence of someone’s intelligent design.

On the failing of the fossil record (from Take the Risk):

For me, the plausibility of evolution is further strained by Darwin’s assertion that within fifty to one hundred years of his time, scientists would become geologically sophisticated enough to find the fossil remains of the entire evolutionary tree in an unequivocal step-by-step progression of life from amoeba to man—including all of the intermediate species.

Of course that was 150 years ago, and there is still no such evidence. It’s just not there. But when you bring that up to the proponents of Darwinism, the best explanation they can come up with is “Well…uh…it’s lost!” Here again I find it requires too much faith for me to believe that explanation given all the fossils we have found without any fossilized evidence of the direct, step-by-step evolutionary progression from simple to complex organisms or from one species to another species. Shrugging and saying, “Well, it was mysteriously lost, and we’ll probably never find it,” doesn’t seem like a particularly satisfying, objective, or scientific response. But what’s even harder for me to swallow is how so many people who can’t explain it are still willing to claim that evolution is not theory but fact, at the same time insisting anyone who wants to consider or discuss creationism as a possibility cannot be a real scientist.

On abortion (from America the Beautiful):

This situation perhaps crystallizes one of the major moral dilemmas we face in American society today: Does a woman have the right to terminate another human life because it is encased in her body? Does ownership convey absolute power of life and death over the owned subject? If it does, then NFL quarterback Michael Vick was unfairly imprisoned for torturing and killing dogs in Atlanta.

On gay parents (from The Big Picture):

Recently a homosexual couple brought a child in to be examined on one of our neurosurgical clinical days. During lunch, after the couple had left, one of my fellow staff members commented favorably on the couple’s obvious love and commitment to the child. He said to me, “I know you don’t approve of homosexual relationships and wouldn’t consider their home a healthy atmosphere in which to raise a child. But I was impressed by that couple. I think their sexual orientation is their business. Think what you want, but it’s just your opinion.”

My response wasn’t nearly that politically correct. “Excuse me, but I beg to differ,” I said. “How I feel and what I think isn’t just my opinion. God in his Word says very clearly that he considers homosexual acts to be an ‘abomination.'”

On how gay marriage brought down the Roman Empire (from America the Beautiful):

I believe God loves homosexuals as much as he loves everyone, but if we can redefine marriage as between two men or two women or any other way based on social pressures as opposed to between a man and a woman, we will continue to redefine it in any way that we wish, which is a slippery slope with a disastrous ending, as witnessed in the dramatic fall of the Roman Empire.

On Washington[Redacted] owner Dan Snyder (from One Nation):

On the other hand, many of the greatest achievers in our society never finished college. That includes Bill Gates Jr., Steve Jobs, and Dan Snyder, who is the owner of the Washington [NFL franchise].

(Carson elsewhere defended Snyder’s refusal to change his team’s name and called the oft-criticized owner “far from the demonic characterization seen in the gullible press that allows itself to be manipulated by those wishing to bring about fundamental change in America.”)

On Independence Day (from Think Big):

I do not get to see many movies, but when I watched the video of Independence Day with my sons, I was struck by the portrayal of the resistance efforts mounted against the alien invaders from outer space. The frail and arbitrary distinctions so often made between various segments of society, even between different countries and ideologies, instantly melted away as the people of the entire world focused not on their differences but upon a common threat and the common goal uniting them—the protection of the planet from alien invaders.

Unlike some of his fellow candidates, though, Carson has made little effort to sugar-coat his most polarizing views. Even before he revealed any political ambitions, he’d moonlighted as a traveling Creationism advocate, giving speeches on the subject and even debating skeptic Richard Dawkins on evolution in 2006: