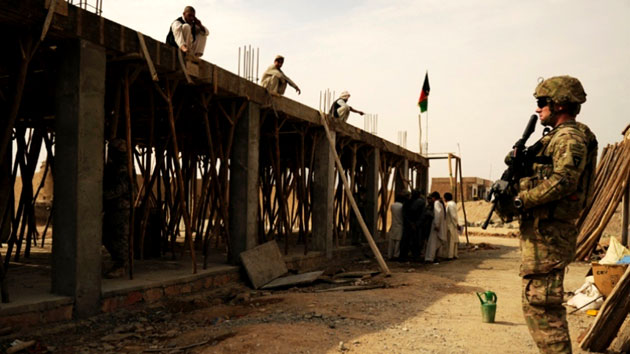 When then-Secretary of Defense Donald Rumsfeld toured a reconstruction center in Jalalabad, Afghanistan, in 2004, he was gushing with optimism. “It is so clear that the Afghan people are winning the struggle to rebuild this nation,” he said. That hope is now basically dead. Last week, the Special Investigator General for the Afghan Reconstruction (SIGAR) issued a report that explains exactly how Afghanistan’s economy will fall apart in the next few years. The reasons are easy to understand: Western powers came to the country and built a lot of infrastructure. Now coalition forces are leaving, and Afghanistan has to figure out how to maintain everything the westerners built. With foreign funds drying up, that’ll be a tall order.

In 2013, the Afghan government collected $2 billion internally, but it spent $5.4 billion. “In other words,” SIGAR notes, “domestic revenue covered only 37% of the total budget.” The 2014 budget of $7.6 billion plans for even more spending than last year. But Afghanistan’s government expects to pay for just $2.8 billion of that with its own money.

Afghanistan, like any other debt-burdened nation in the world, can make the imbalance work as long as it has another, external source of funds. But donors are starting to temper their support, and the security, social services, and infrastructure maintenance costs are increasing rapidly. (You can read Mother Jones‘ list of Afghan infrastructure disasters from last year here.)

More money will be hard for Afghanistan to come by on its own. There’s some mineral development in the works, but it’ll be decades before it reaches its true potential, SIGAR says. Licit exports only amounted to a $376 million, or about $8.20 per person, in 2012, according to the CIA World Factbook. (The CIA names “small-scale production of bricks” and “handwoven carpets” among the country’s top industries.)

Afghanistan’s one lucrative export is illegal everywhere. Last year, Afghanistan’s opium industry was worth an estimated $3 billion, despite the billions the US has spent trying to stamp it out.

“Without donor contributions,” SIGAR argues, “the Afghan government will not be able to meet most of its operating or development expenditures.” Citing an IMF report, SIGAR says the gap between domestic revenue and expenses will average $7.7 billion every year through 2018.

So who’s fault is this mess? SIGAR lays much of the blame at the feet of the United States and other countries that built Afghanistan’s infrastructure in the first place. “Each new development project that the United States and other international donors fund increases the country’s O&M [operation and maintenance] costs, adding pressure to Afghanistan’s operating budget,” the report states, adding that the US and other other governments should have had a plan for how to pay for their projects’ maintenance, knowing they’d eventually have to leave.

“Much of the more than $104 billion the United States has committed to reconstruction projects and programs risks being wasted,” the report adds, “because the Afghans cannot sustain the investment without massive continued donor support.”