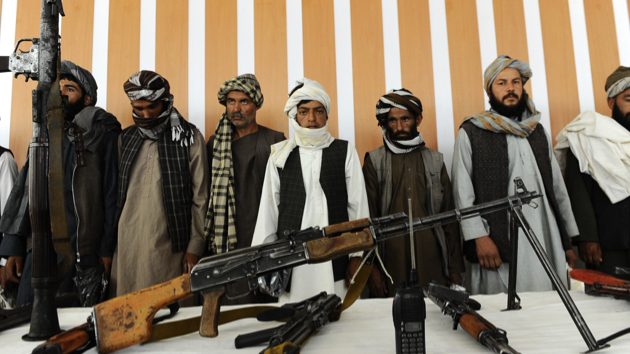 Over the last decade, the United States has provided hundreds of thousands of small arms—including machine guns, grenade launchers, and rifles—to the Afghan security forces. But the US and its Afghan counterparts are doing an inadequate job of tracking these weapons, government investigators claim, increasing the likelihood that they could wind up in the hands of the resurgent Taliban, which has recently made key military advances that are threatening Afghanistan’s fragile stability.

In 2010, following reports that the US military was losing track of the guns it was providing to Afghan troops, Congress required the Defense Department to register and monitor all weapons given to the Afghan National Security Forces, which includes the army and police. But the primary US databases that track these arms aren’t up to the task; they don’t communicate with each other and are riddled with incomplete information, the Special Inspector General for Afghanistan Reconstruction (SIGAR) reports. Auditors examined serial numbers recorded in one database and found that 203,888 weapons—or 43 percent—had missing information or duplicate numbers. Many entries that included serial numbers lacked shipping or receiving dates.

The Afghan recordkeeping system is worse still, SIGAR investigators concluded, based on an audit they conducted in Kabul and Kandahar from May 2013 to June 2014. The Afghan police, for example, rely on “a combination of hard copy documents, handwritten records, and some Microsoft Excel spreadsheets” to track weapons.

Aki Peritz, a former CIA counterterrorism analyst who co-authored a book on the US fight against Al Qaeda, says that anytime you inject tons of weapons into a impoverished area, they are guaranteed to disappear. “It’s like telling someone in the United States, here’s a $30,000 thing and if you lose it, we will give you another one,” he says.

According to SIGAR, the US is also supplying Afghanistan with too many weapons. It estimates that the Afghan security forces have a surplus of over 80,000 AK-47s, 5,800 grenade launchers, and 2,500 Russian PKM machine guns. Defense Department officials told investigators they do not currently have the authority to repossess excess weapons, but they said that “DOD will remain engaged in addressing these critical weapons accountability issues.” The Pentagon did not respond to comment for Mother Jones.

SIGAR concludes that, without confidence in the Afghan government’s ability to account for weapons, “there is a real potential for these weapons to fall into the hands of insurgents, which will pose additional risks to U.S. personnel, the ANSF, and Afghan civilians.” It’s certainly happened before—in 2009, the New York Times reported that “of 30 rifle magazines recently taken from insurgents’ corpses, at least 17 contained cartridges, or rounds, identical to ammunition the United States had provided to Afghan government forces.”

There’s also a chance that US weapons could leave Afghanistan’s borders, potentially fueling other conflicts. “They can indeed move back and forth—after all, the explosives typically move the other way (from Pakistan into Afghanistan),” says Michael O’Hanlon,  director of research for the Foreign Policy program at the Brookings Institution. Peritz adds, “Some will stay in Afghanistan, some will bleed over into the borderlands, and from there, who knows?”