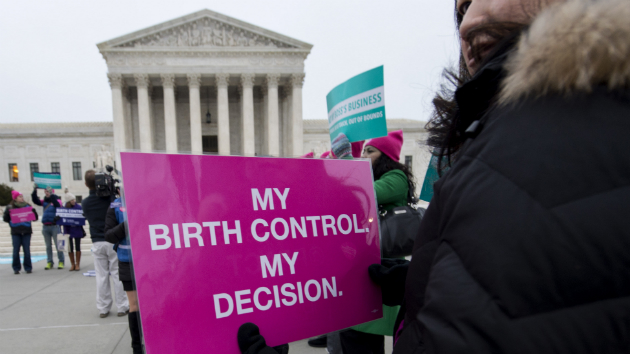 Less than a day after the United States Supreme Court issued its divisive ruling on Burwell v. Hobby Lobby, it has already begun to toss aside the supposedly narrow interpretation of the decision. On Tuesday, the Supremes ordered lower courts to rehear any cases where companies had sought to deny coverage for any type of contraception, not just the specific types Hobby Lobby was opposed to.

“The court, I fear, has ventured into a minefield,” Ginsburg wrote in her dissent.

The Affordable Care Act had listed 20 forms of contraception that had to be covered as preventive services. But Hobby Lobby, a craft supply chain, claimed that Plan B, Ella, and two types of IUD were abortifacients that violated the owners’ religious principles. The science was against Hobby Lobby—these contraceptives do not prevent implantation of a fertilized egg and are not considered abortifacients in the medical world—but the conservative majority bought Hobby Lobby’s argument that it should be exempted from the law.

Justice Samuel Alito, who wrote the the 5-4 opinion, used numerous qualifiers in an attempt to limit its scope, but a series of orders released by the court Tuesday contradict any narrow interpretation of the ruling.

The court vacated two decisions by the US Court of Appeals for the Sixth Circuit—Autocam Corp. v. Burwell and Eden Foods v. Burwell—and commanded the appeals court to rehear the cases in light of the Hobby Lobby decision. In both instances the Sixth Circuit had rejected requests from Catholic-owned businesses that sought to exempt the companies from offering insurance that covered any of the 20 mandated forms of birth control. The Supreme Court also compelled the US Court of Appeals for the District of Columbia to reopen a similar case, Gilardi v. Department of Health & Human Services. “With Tuesday’s orders,” wrote The Nation‘s Zoë Carpenter, “the conservative majority has effectively endorsed the idea that religious objections to insurance that covers any form of preventative healthcare for women have merit.”

Justice Ruth Bader Ginsburg predicted this outcome in her dissent, noting that the logic of Alito’s decision went far beyond the limited scope he initially claimed. “The court, I fear, has ventured into a minefield,” Ginsburg wrote.

No matter what Alito and other justices may claim, court decisions set precedent and offer opportunities for lower courts to expand the logic of the initial case. (See Bush v. Gore.) The immediate turnaround to broaden the scope of Hobby Lobby won’t do anything to dispel fears that the case has opened the way for a broad swath of businesses to object to any government regulation they dislike based on the religious whims of corporate owners.