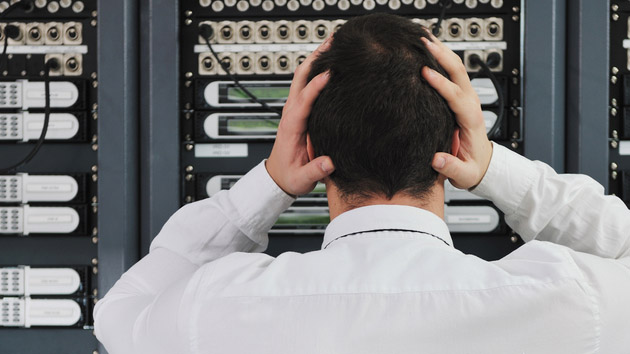 This is how the justices seem to feel about computers.<a href="http://www.shutterstock.com/pic-67263847/stock-photo-business-man-in-network-server-room-have-problems-and-looking-for-disaster-solution.html?src=csl_recent_image-1">dotshock</a>/Shutterstock

On Wednesday, the Supreme Court ruled on two big tech-related cases: Riley v. California, in which it held that police can’t search cellphones without a warrant, and ABC v. Aereo, where it decided that the startup Aereo’s system to allow users to stream broadcast TV on their phones and computers violated copyright law.

But during April’s oral arguments on the cases, the justices broadcast their own lack of technological expertise. Antonin Scalia didn’t realize HBO was cable. During a line of questioning involving Dropbox and iCloud, Sonia Sotomayor referred to “the iDrop.” And Stephen Breyer said that he wasn’t sure if he owned an iPhone, “because I can never get into it because of the password.”

Sadly, this isn’t the first time the justices—whose average age is 68—have been befuddled by tech terminology. Here’s a list of some other ways the highest court in the land has struggled to keep pace with the times:

The Internet: Justice John Paul Stevens’ description of how people spend time online in Reno v. ACLU, a 1997 case that was the court’s first major ruling involving the internet, wasn’t wrong per se. But the sheer number of scare quotes in his majority opinion—”those [resources] most relevant to this case are electronic mail (‘e-mail’), automatic mailing list services (‘mail exploders,’ sometimes referred to as ‘listservs’), ‘newsgroups,’ ‘chat rooms,’ and the ‘World Wide Web'”—suggests the man himself had never spent a minute online. He helpfully sums it all up for us: “Taken together, these tools constitute a unique medium—known to its users as ‘cyberspace’—located in no particular geographical location but available to anyone, anywhere in the world, with access to the Internet.”

Email: Instead of communicating by computers, members of the court still send each other paper memos. “The justices are not necessarily the most technologically sophisticated people,” Justice Elena Kagan told a group of students at Brown University in 2013. “The court hasn’t really ‘gotten to’ email.” But hey, at least they have copy machines now.

Coding: Aereo and Riley weren’t the court’s only tech-related cases this term. It also heard Alice v. CLS Bank, a case involving software patenting, which gave Justice Anthony Kennedy a chance to share his understanding of simple coding must be. Looking at a complex set of steps for mitigating settlement risks among multiple parties, he suggested that “any computer group of people sitting around a coffee shop in Silicon Valley” could turn it into code over a weekend. But Chief Justice John Roberts disagreed: “Just looking at it,” he said, “it looks pretty complicated. There are a lot of arrows.”

Genetics: When the court ruled last June that human genes can’t be patented, the scientific community celebrated. But in his concurring opinion, Scalia was frank about the fact that he wasn’t really sure what was going on with all that science stuff: “I join the judgment of the Court, except [the portions] going into fine details of molecular biology. I am unable to affirm those details on my own knowledge or even my own belief.”

Sexting: When sexting was explained to Scalia during a 2010 case about whether a city had the right to search its employee’s pager, he didn’t really seem to get the concept. “Could [the employee] print these spicy little conversations and send them to his buddies?” he asked. At least this week’s cellphone case didn’t require Scalia to demonstrate his knowledge of Snapchat.

Social media: It’s actually a little unclear if it’s virtual friendships that leave Breyer cold, or just Aaron Sorkin. “If I’m applying the First Amendment, I have to apply it to a world where there’s an Internet, and there’s Facebook,” he said in a 2010 speech. “And there are movies like The Social Network, which I couldn’t even understand.”