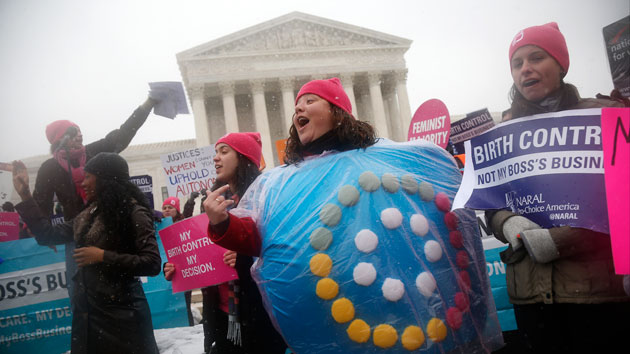 Margot Riphagen of New Orleans wears a birth control pills costume as she protests in front of the US Supreme Court.Charles Dharapak/AP Photo

Last week, the Supreme Court heard oral arguments in Sebelius v. Hobby Lobby Inc., the closely watched case in which the Oklahoma-based craft store chain has challenged the Affordable Care Act’s contraceptive mandate, requiring insurance policies to cover birth control without a copay. Hobby Lobby’s high-profile case may have nabbed most of the headlines so far, but it’s far from the only company that’s taking on the Obama administration over the mandate.

Since February 2012, 71 other for-profit companies have challenged the ACA’s contraceptive mandate in court, according to the National Women’s Law Center (NWLC). The majority of these for-profit cases (46 in addition to Hobby Lobby’s) are still pending. Jump to the full list of cases by clicking here.

The plaintiffs maintain that the federal government, by requiring contraceptive coverage under the ACA, is infringing on their religious views. Like Hobby Lobby, many of these companies had already covered birth control under their insurance plans, but they oppose the ACA’s rules requiring health plans to cover contraceptives including the drug Plan B, which they argue causes abortions. The Thomas More Law Center, a law firm “dedicated to the defense and promotion of the religious freedom of Christians,” has filed 11 cases on behalf of 33 plaintiffs against the ACA contraceptive mandate. The Religious Freedom Restoration Act, the center asserts in an amicus brief supporting Hobby Lobby, protects employers fighting the mandate “from being forced, under threat of ruinous government fines, to fund products and services that violate their sincerely held religious beliefs.”

“Forced” is not quite accurate, though, as my colleague Stephanie Mencimer reported last week. An employer doesn’t have to provide health insurance to its employees at all; in fact, it’s probably cheaper for a company to instead pay the tax that would help subsidize its employees’ coverage obtained through the exchanges or Medicaid.

A pro-Hobby Lobby verdict would most immediately affect the at least 22,000 people employed by the companies who brought these lawsuits.

A Supreme Court ruling in Hobby Lobby’s favor could have a far-reaching impact, potentially dismantling corporate laws that have long shielded CEOs and board members from lawsuits or paving the way for companies to claim religious exemptions from other federal regulations, as we reported last week. But a pro-Hobby Lobby verdict would most immediately affect the more than 22,000 people employed by the companies who brought these lawsuits, says Gretchen Borchelt, senior counsel and director of state reproductive health policy at the NWLC, which has been tracking the cases. The outcome of many of these cases, she says, may hinge on the Supreme Court’s Hobby Lobby ruling.

So who are some of these other companies fighting the Obama administration over the ACA contraceptive mandate?

In Michigan, there’s Trijicon, a military contractor specializing in optics equipment for weapons. The company last made headlines in 2010, when it came under fire for stamping references to Bible verses on its combat rifle sights. According to data provided to Mother Jones by the Department of Defense, Trijicon currently holds at least $8.9 million in active contracts with the US military.

In its August 2013 lawsuit, Trijicon claims that the company “and its shareholders have a deeply held religious belief that life begins at conception/fertilization.” The company’s website states: “We believe that America is great when its people are good. This goodness has been based on biblical standards throughout our history and we will strive to follow those morals.” Depending on where the Supreme Court lands on Hobby Lobby, that belief could mean no more birth control coverage for the company’s 257 employees, 212 of whom are currently enrolled in the company’s insurance plan. Trijicon did not respond to interview requests or emailed questions.

In West Virginia, Joe Holland, a born-again Christian who owns a local car dealership, is taking on the contraceptive mandate in court even while publicly touting his company’s support for women. Joe Holland Chevrolet, which filed suit against the Obama administration in June 2013, is closed on Sundays; on Monday mornings, Holland conducts an informal prayer session that’s open to his 150 employees. Holland is proud to have women filling positions throughout his dealership, all the way up to the management level. “When we think of women in the automotive industry, most of us see a receptionist or someone behind the desk doing paper work and other behind the scene tasks,” says a company webpage created in 2011. “Not at Joe Holland Chevrolet & Imports of South Charleston, WV…At Joe Holland we understand the need for women to feel they are receiving trustworthy information and advice when it comes to service on their vehicle or the purchase of a vehicle.”

Ohio-based companies Freshway Foods and Freshway Logistics, a produce processor and distributor run by brothers Philip and Frank Gilardi Jr., are also taking on Obamacare over the contraception mandate. “[A]s the two owners with controlling interests in the two corporations,” the Gilardis, who are Catholic, argue in their legal complaint, “they conduct their businesses in a manner that does not violate their sincerely-held religious beliefs or moral values, and they wish to continue to do so.”

Some Freshway workers might beg to differ. In 2011, former Freshway employee Lilia Trujillo-Salas sued the company for sexual harassment, after allegedly enduring multiple incidents of “unwelcome sexual comments, sexual innuendo, and physical contact,” according to court documents. Trujillo-Salas complained to her supervisors and asked to transfer jobs after a male coworker allegedly held her in a storage room and told her she wouldn’t be released until she kissed him. Another time, a coworker allegedly propositioned her for sex. Eventually, Trujillo-Salas was suspended then fired after injuring herself at work. Freshway denied the sexual-assault allegations but settled the case with an undisclosed payout.

“I don’t care if the federal government is telling me to buy my employees Jack Daniel’s or birth control.”

One company NWLC’s Borchelt was particularly surprised to see on the list is Eden Foods, the Michigan-based organic food company, which she says has an “outstanding record of social and environmental responsibility.”

The company filed suit against the Obama administration in early 2013, eventually losing its case at the 6th Circuit Court of Appeals. Eden Foods did not respond to interview requests, but when Salon reporter Irin Carmon interviewed the company’s CEO, Michael Potter, about the case last April, he argued:

“I don’t care if the federal government is telling me to buy my employees Jack Daniel’s or birth control. What gives them the right to tell me that I have to do that?…I’m not trying to get birth control out of Rite Aid or Wal-Mart, but don’t tell me I gotta pay for it.”

Even after a string of bad press and considerable customer backlash, Potter defended the lawsuit: “We believe in a woman’s right to decide, and have access to, all aspects of their health care and reproductive management. This lawsuit does not block, or intend to block, anyone’s access to health care or reproductive management. This lawsuit is about protecting religious freedom and stopping the government from forcing citizens to violate their conscience. We object to the HHS mandate and its government overreach.”

Borchelt doesn’t see it that way. “These companies are not hiring based on the religious beliefs of the workers. Imagine being someone applying for a warehouse position at an organic food company. Why would you ever think, ‘Oh, I need to research this owner’s religious beliefs to know whether or not I’m going to get access to birth control insurance’?”

Below is a full list of the pending cases, as tracked by the NWLC. Watch this space for periodic updates. Look up individual court documents at the American Civil Liberties Union’s website.