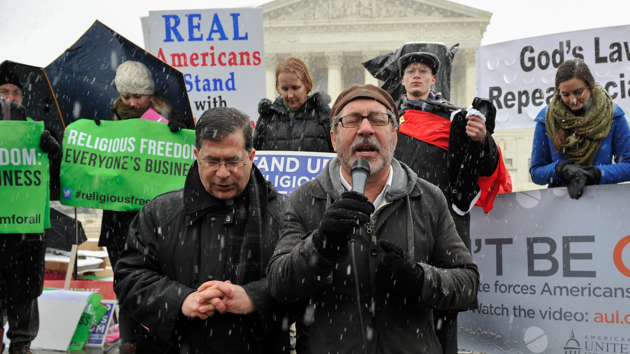 Hobby Lobby supporters pray to end abortion outside the US Supreme Court.Jay Mallin/ZUMA

When Obamacare compelled businesses to include emergency contraception in employee health care plans, Hobby Lobby, a national chain of craft stores, fought the law all the way to the Supreme Court. The Affordable Care Act’s contraception mandate, the company’s owners argued, forced them to violate their religious beliefs. But while it was suing the government, Hobby Lobby spent millions of dollars on an employee retirement plan that invested in the manufacturers of the same contraceptive products the firm’s owners cite in their lawsuit.

Several of the mutual funds in Hobby Lobby’s retirement plan have stock holdings in companies that manufacture the specific drugs and devices that the Green family, which owns Hobby Lobby, is fighting to keep out of Hobby Lobby’s health care policies: the emergency contraceptive pills Plan B and Ella, and copper and hormonal intrauterine devices.

These companies include Teva Pharmaceutical Industries, which makes Plan B and ParaGard, a copper IUD, and Actavis, which makes a generic version of Plan B and distributes Ella. Other stock holdings in the mutual funds selected by Hobby Lobby include Pfizer, the maker of Cytotec and Prostin E2, which are used to induce abortions; Bayer, which manufactures the hormonal IUDs Skyla and Mirena; AstraZeneca, which has an Indian subsidiary that manufactures Prostodin, Cerviprime, and Partocin, three drugs commonly used in abortions; and Forest Laboratories, which makes Cervidil, a drug used to induce abortions. Several funds in the Hobby Lobby retirement plan also invested in Aetna and Humana, two health insurance companies that cover surgical abortions, abortion drugs, and emergency contraception in many of the health care policies they sell.

In a brief filed with the Supreme Court, the Greens object to covering Plan B, Ella, and IUDs because they claim that these products can prevent a fertilized egg from implanting in a woman’s uterus—a process the Greens consider abortion. But researchers reject the notion that emergency contraceptive pills prevent implantation the implantation of a fertilized egg. Instead, they work by delaying ovulation or making it harder for sperm to swim to the egg. The Green’s contention that the pills cause abortions is a central pillar of their argument for gutting the contraception mandate. Yet, for years, Hobby Lobby’s health insurance plans did cover Plan B and Ella. It was only in 2012, when the Greens considered filing a lawsuit against the Affordable Care Act, that they dropped these drugs from the plan.

A website Hobby Lobby set up to answer questions about the Supreme Court case states that its 401(k) plan comes with “a generous company match.” In 2012, Hobby Lobby contributed $3.8 million to its employee savings plans, which had 13,400 employee participants at the beginning of that year.

The information on Hobby Lobby’s 401(k) investments is included in the company’s 2013 annual disclosure to the Department of Labor. The records contain a list, dated December 31, 2012, of 24 funds that were included in its employer-sponsored retirement plan. MorningStar, an investment research firm, provided Mother Jones with the names of the companies in nine of those funds as of December 31, 2012. Each fund’s portfolio consists of at least dozens if not hundreds of different holdings.

All nine funds—which have assets of $73 million, or three-quarters of the Hobby Lobby retirement plan’s total assets—contained holdings that clashed with the Greens’ stated religious principles.

Hobby Lobby and the Becket Fund for Religious Liberty, the conservative group that provided Hobby Lobby with legal representation, did not respond to questions about these investments or whether Hobby Lobby has changed its retirement plan.

In their Supreme Court complaint, Hobby Lobby’s owners chronicle the many ways in which they avoid entanglements with objectionable companies. Hobby Lobby stores do not sell shot glasses, for example, and the Greens decline requests from beer distributors to back-haul beer on Hobby Lobby trucks.

Similar options exist for companies that want to practice what’s sometimes called faith-based investing. To avoid supporting companies that manufacture abortion drugs—or products such as alcohol or pornography—religious investors can turn to a cottage industry of mutual funds that screen out stocks that religious people might consider morally objectionable. The Timothy Plan and the Ave Maria Fund, for example, screen for companies that manufacture abortion drugs, support Planned Parenthood, or engage in embryonic stem cell research. Dan Hardt, a Kentucky financial planner who specializes in faith-based investing, says the performances of these funds are about the same as if they had not been screened. But Hobby Lobby’s managers either were not aware of these options or chose not to invest in them.