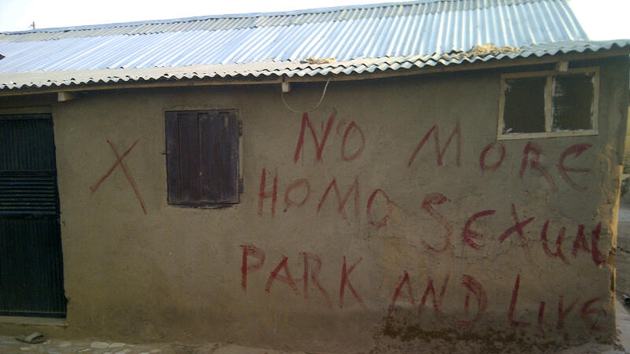 Anti-gay graffiti on a home in the Gishiri neighborhood of Abuja. "Park and live" is intended to mean "pack and leave."

Around midnight on February 13, a young Nigerian man named Femi* was jolted out of his evening prayer by shouting outside his window. A crowd of some 40 people had gathered around his house. “No more homosexuals in Gishiri!” they yelled, referring to Femi’s neighborhood within Nigeria’s capital city, Abuja. The mob broke down his door and dragged him outside in his boxers. They beat him and about 13 other gay men that night with broken furniture, machete handles, sticks, and a garden rake, vowing to kill them if they didn’t clear out of the neighborhood.

The attack, and other acts of vigilante violence targeting gays and lesbians around the country, was motivated by a new anti-gay law that Nigeria’s president signed January 7. The measure, modeled off the one that Uganda enacted in late February, levies harsh prison sentences on anyone who makes a “public show” of a “direct” or “indirect” same-sex relationship or supports an LGBT organization (10 years), and anyone who attempts to enter into a same-sex marriage (14 years), even though this would be virtually impossible in Nigeria. The anti-gay backlash the law has provoked in Nigeria has led not just to violence, but to homelessness, unemployment, harassment, and a steep drop-off in HIV/AIDS treatment.

John Adeniyi narrowly escaped the attack in Gishiri and has been recording accounts of the violence that night. He’s a human rights program officer at the International Center for Advocacy on Rights to Health (ICARH), an HIV intervention organization based in Abuja. To find out what life is like for Nigeria’s gay community under the country’s new law—and what gay Ugandans are starting to face—I visited with Adeniyi during a recent trip to Nigeria.

“All the [Gishiri] victims are presently homeless,” Adeniyi told me, explaining that Femi and the other victims are afraid to return to their homes, lest their neighbors make good on their pledge to kill them. “Including me. I cannot go back to Gishiri village.” After the attack, members of the mob spray-painted homophobic slogans on the homes of residents suspected of being gay.

Four of the residents who were attacked that night subsequently lost their jobs after their employers discovered their sexuality, according to several victims. Chukwuemeka*, a 22-year-old living with HIV, used to work as a cashier. He was fired after the February mob attack, and he now spends his nights in a roadside auto repair shack. Femi owns a clothing boutique, but now he is afraid to go back. “Next week the bank will start calling me,” he says, referring to an overdue payment he owes on a 100,000 Naira (about $600) loan he took out to start his business.

As in most African countries, homosexuality has been illegal in Nigeria since the British colonial era, but convictions were rare. Nigerians used to be generally tolerant of LGBT people in their midst, even if they were homophobic, Adeniyi says, but the new law—imposing harsh penalties for homosexuality—has stirred up a wave of anti-gay sentiment in the deeply religious country. “People already knew that people were gay,” he says. “Now, what we have seen is tenants threatening other tenants, saying, ‘I’m going to expose you. I know what you do.’…Now they can call the police and get people convicted.”

And since the law does not define who is gay and who is not, the police and the general public are making the determination themselves, sparking witch hunts around the country. Adeniyi says that the head of the police department where Gishiri victims were held overnight after the attack, told them he knew they were gay, citing several arbitrary characteristics: “He said, ‘You, because you wrote down you’re a hairdresser, you must be gay…The two of you, because you guys live together, you have to be gay.’ He talked to one other, and said, ‘I’m sure you picked up a gay personality because you schooled abroad.'”

“After they passed the bill into law—wow. It’s hell in Nigeria. Nobody wants to see you. When you walk, they say, ‘Why are you walking like this? Are you a gay?'”

In addition to discrimination and harassment, Nigeria’s new law has already led to a sharp decline in HIV/AIDS treatment and prevention in a country that has the second highest HIV rate in the world. About 3.4 million Nigerians are infected and some 17 percent of the gay population has the disease. The anti-gay law discourages people from seeking treatment for fear that doing so could out them as gay, and it also criminalizes organizations that serve the LGBT community.

Adeniyi estimates that since the law took effect in January, the number of patients coming into ICARH for HIV treatment has dropped by over 50 percent. “One person told me he would rather die…than come to the organization” and risk imprisonment, he says. He adds that LGBT couples living with HIV may also be discouraged from going to the doctor for couples counseling, out of fear that the doctor may turn them over to the police.

Eight organizations that provide HIV treatment and prevention services in northern Nigeria have cut back on HIV outreach, training, and education programs, according to Dorothy Aken’Ova, executive director of Nigeria’s International Center for Reproductive Health and Sexual Rights (INCRESE). “People thought, ‘You know what? I don’t want to be in prison because I’m providing treatment for these gay homosexual people,'” Adeniyi says. He expects more organizations will drop their programs in the coming months.

ICARH has had to scale back, too. The group has halted outreach events designed to encourage people to get tested due to concerns that the authorities might interpret this as an effort to aid the gay community. “Since the law has been passed, we are doing counseling and testing, but we have suspended outreaches.”

UNAIDS, a United Nations program to combat HIV/AIDS, and the Global Fund to Fight AIDS, Tuberculosis, and Malaria have warned the new law could hinder progress in the fight against HIV/AIDS in Nigeria. In late January, the US Ambassador to Nigeria said the law might impede US efforts to help Nigeria fight the epidemic. Even social scientists have been scared off from taking stock of HIV trends in Nigeria—data that can improve the response to the epidemic—until the government can assure researchers that they will be exempt from punishment under the law, says Aken’Ova of INCRESE.

The anti-gay crackdown in Nigeria and Uganda is part of a broader trend in Africa, where at least seven other African countries have recently moved to tighten their anti-homosexuality laws. In many cases, lawmakers in these countries have been spurred to action by American anti-gay activists and the Christian right, who in some cases stoked fears of homosexuals preying on African children. US evangelicals have had a hand in anti-gay legislation and constitutional reform measures in Nigeria, Uganda, Namibia, Malawi, Kenya, Liberia, Zambia, Rwanda, and Zimbabwe.

Thanks to their efforts, life for more and more gay Africans is beginning to look like Chukwuemeka’s. “After they passed the bill into law—wow. It’s hell in Nigeria,” he says. “Nobody wants to see you. When you walk, they say, ‘Why are you walking like this? Are you a gay?'”

*Victims’ names have been changed.