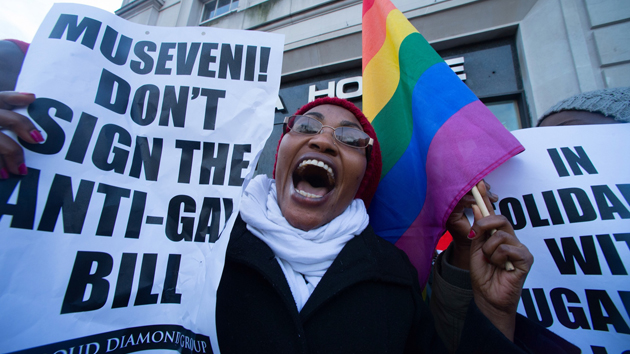 Brushing aside protests from Western leaders and human rights organizations, on Monday Ugandan President Yoweri Museveni signed the country’s draconian anti-gay bill into law. The measure increases the penalty for homosexuality, which was already illegal, to life in prison in some cases. It also includes a raft of other harsh provisions, as Human Rights Watch explains:

The “attempt to commit homosexuality” incurs a penalty of seven years as does “aiding and abetting” homosexuality. A person who “keeps a house, room, set of rooms, or place of any kind for purposes of homosexuality” also faces seven years’ imprisonment. Because the law also criminalizes the “promotion” of homosexuality, there are far-reaching implications beyond the increase in punishments for same-sex sexual conduct…Public health promotion and prevention efforts targeting “at risk” groups might have to be curtailed, and health educators and healthcare providers could also face criminal sanction under the same provision.

During the signing ceremony at his official residence outside the capital, Kampala, Museveni blamed the rise of gay culture in Uganda on “arrogant and careless Western groups that are fond of coming into our schools and recruiting young children into homosexuality and lesbianism” and claimed that some were doing so for “mercenary reasons—to get money—in effect homosexual prostitutes.”

Gay rights activists say the climate for gays in Uganda has already deteriorated drastically since the bill passed the Ugandan parliament in December. According to Frank Mugisha, the executive director of Sexual Minorities Uganda, the nation’s primary gay rights group, police are rounding up 30 to 40 suspected homosexuals each week. In some cases, simply being unmarried and spending time in the company of people of the same gender is enough to arouse police suspicion. Mugisha also says that the bill’s passage has brought a surge in anti-gay vigilantism and that religious leaders in the suburbs surrounding Kampala have been calling for gays to be killed or burned over the public address systems. “The situation is extremely worrying,” Mugisha says. “We are living in fear.”

Maria Burnett, a senior Africa researcher for Human Rights Watch, believes Uganda may see more anti-gay violence now that the bill is officially law. “When political leaders stir up hate, it can look like a tacit approval of this kind of mob violence,” she says. Burnett also stresses that the measure’s passage is part of a “broader pattern of clawing back basic human rights, such as freedom of association and freedom of expression, in Uganda.”

The White House sounded a similar note in a statement late Monday morning: “As President Obama has said, this law is more than an affront and a danger to the gay community in Uganda, it reflects poorly on the country’s commitment to protecting the human rights of its people and will undermine public health, including efforts to fight HIV/AIDS. We will continue to urge the Ugandan government to repeal this abhorrent law and to advocate for the protection of the universal human rights of LGBT persons in Uganda and around the world.”

For more on the roots of Uganda’s anti-gay law, see Mac McClelland’s “The Love that Dares.”