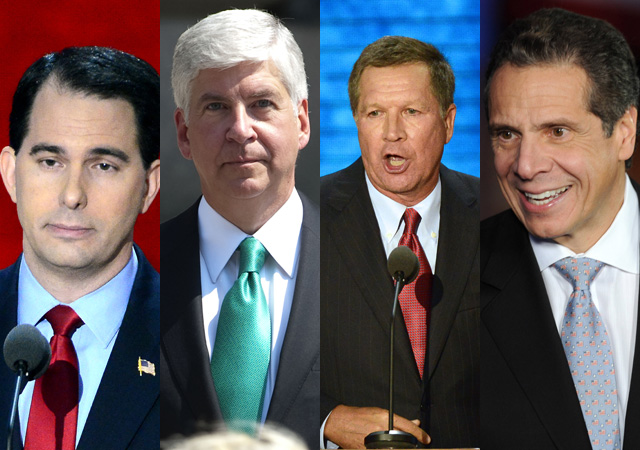 The 2014 election season means it’s reckoning time for a trio of high-profile Republican governors elected four years ago at the height of the tea party movement. GOP governors in Wisconsin, Michigan, and Ohio ran on ambitious pledges to create jobs and jump-start their states’ economies. To meet those goals, score political points, and set themselves up for reelection, they launched their own versions of the dark-money nonprofit groups used by the Koch brothers’ political network and the pro-Obama Organizing for Action. Now, these governors are learning that their dark-money tactics could become an election year liability.

Months after after winning his gubernatorial bid in 2010, Ohio Gov. John Kasich signed his very first bill into law, replacing the state’s development department with a 501(c)(3) nonprofit called JobsOhio that would “move at the speed of business.”

Critics slam JobsOhio for a lack of transparency. Although nearly all of its revenue comes from state liquor profits, JobsOhio is exempt from public records laws, its annual disclosures to the Ohio Ethics Commission are confidential, and state ethics laws do not apply to it. When Ohio’s state auditor, Republican Dave Yost, tried to audit JobsOhio, GOP state lawmakers passed legislation all but blocking his office from fully scrutinizing its books. (Because JobsOhio launched with state-appropriated money, Yost was allowed a single, limited audit, which raised several red flags.) In its first year, JobsOhio also pocketed nearly $7 million from five private donors, but the Ohio supreme court later ruled the group didn’t have to release emails or records detailing the sources of those donations.

JobsOhio has faced charges of political favoritism and pay-to-play. Its board of directors, hand-picked by Kasich, includes multiple donors to Kasich’s campaigns and employees of Kasich donors. The Ohio Ethics Commission also found that 9 of the 22 JobsOhio officials required to file financial disclosure statements in 2011 and 2012—including six of its nine board members—had potential financial conflicts such as holding financial stakes in companies that had received incentives from JobsOhio. Matt Englehart, a spokesman for JobsOhio, says the group’s conflict of interest policies are “effective,” that JobsOhio holds board members and staffers to “a high level of ethical conduct,” and that the group is “held to a high level of accountability and reporting to what we do.”

To the north, Michigan Gov. Rick Snyder spent much of 2012 swatting away accusations about his anonymously funded nonprofit, the New Energy to Reinvent and Diversify, or NERD, Fund. (A riff off Snyder’s “one tough nerd” nickname.) Snyder launched the NERD Fund in early 2011 with the aim of “lessening the financial burdens of government in the state of Michigan.”

In practice, the NERD Fund has acted as the Snyder administration’s private piggy bank, paying for whatever the governor and his team want. For months, unbeknownst to the public, it paid the salary of Richard Baird, a top aide to Snyder who nonetheless had a government phone number, and a .gov email address. The NERD Fund also paid for an expensive condo for Kevyn Orr, the white-collar lawyer hand-picked by Snyder to be Detroit’s all-powerful, unelected emergency manager. The NERD Fund did not willingly disclose this: Only after pressure from reporters and a lawsuit filed in state district court by a Detroit area activist did the nonprofit divulge that it was paying Baird and Orr.

The NERD Fund, like Kasich’s JobsOhio, has faced pay-to-play questions. The nonprofit’s sole publicly known donor is the pharmacy chain CVS Caremark, which voluntarily disclosed a $1,000 donation made in 2012. (The NERD Fund raised nearly $1.7 million in 2011 and 2012.) The next year, CVS reportedly landed a $60 million pharmacy contract from the Detroit Emergency Manager Kevyn Orr. Michigan Democratic Party Chair Lon Johnson called the deal “pay-to-play politics,” but a Snyder spokesman said it was a “massive stretch” to connect the CVS donation to the contract. (Snyder, for his part, testified under oath that he personally didn’t know who donated to the NERD Fund.) A CVS spokeswoman did not respond to multiple requests for comment.

“[WEDC] really seems to be a rat hole where a lot of money is being dumped down into it,” says Mike McCabe, executive director of the Wisconsin Democracy Campaign

Exempt from open records requests relating to financial matters, the WEDC has been criticized by state auditors for failing to keep records on a host of issues—how WEDC selects incentive recipients, how that incentive money is ultimately spent, and whether WEDC grants actually create jobs. “It really seems to be a rat hole where a lot of money is being dumped down into it and they can’t account for where a lot of that money has even gone,” says Mike McCabe, executive director of the Wisconsin Democracy Campaign.

New York Gov. Andrew Cuomo, a Democrat up for reelection in 2014, has also embraced the power of dark money. Cuomo won his 2010 election in part by pledging to “clean up” the corruption in Albany, the state capital. Soon after, however, he urged several of New York’s wealthiest business executives to form the Committee to Save New York, a secretly funded nonprofit that went on to advocate for Cuomo’s pro-business agenda and against labor unions.

In 2011 and 2012, the committee spent more than $16 million lobbying on Cuomo’s behalf, the most of any organization. In the summer of 2012, the New York Times revealed that gambling interests gave $2 million to the committee at the same time Cuomo launched a full-throated push for opening private casinos in New York state. The governor has denied any connection between the donations and his position, but the appearance alone, watchdogs said, raised serious questions about influence peddling.

For all of these governors, dark-money connections have proved a headache, if not a political liability. Kasich’s Democratic challenger, Cuyahoga County Executive Ed FitzGerald, has requested an ethics review of JobsOhio. Snyder’s opponent, ex-congressman Mark Schauer, has demanded the NERD Fund release its full donor list. (As a state lawmaker, Schauer had his own, much smaller nonprofit.) Several of these nonprofits have bowed to political pressure. The Committee to Save New York shut its doors after Cuomo signed new disclosure rules into law. In Michigan, Snyder eventually put Richard Baird on the state payroll, and in October, he said the NERD Fund would be shuttered, with a spokeswoman calling it an “unnecessary distraction.”

Good-government types hoping for some retroactive transparency are, however, out of luck. Even as the Committee to Save New York and the NERD Fund disappear, the two groups said their donors would now and always remain secret.