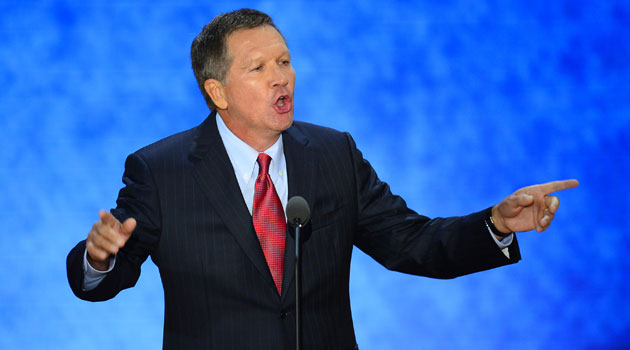 John Kasich, the Republican governor of Ohio, had hit rock bottom. It was March 2011, and Kasich was about to sign Senate Bill 5, the controversial anti-union legislation that curbed bargaining rights for cops, firefighters, teachers, and other public employees. Most Ohioans thought SB 5 was a terrible idea, and Kasich’s approval rating had sunk to a pitiful 35 percent. In a hypothetical revote, 55 percent of Ohioans surveyed by Public Policy Polling said they would choose former Democratic Gov. Ted Strickland, Kasich’s 2010 opponent, over the guy they’d elected—albeit by a slim margin—only a few months earlier.

For much of 2011, Kasich, a former congressman, Fox News host, and Lehman Brothers banker, contended for the title of America’s least popular governor, which he briefly held that fall. In November of that year, SB 5 got repealed at the ballot box by a 2-1 margin. Kasich was down and out—but not alone. Many of the big names in the Republican class of 2010 governors, from Florida’s Rick Scott to Michigan’s Rick Snyder to Wisconsin’s Scott Walker, watched their approval ratings sink. What Kasich did next none of his fellow Class of ’10 members have quite replicated: Slowly, quietly, he has repaired his image in Ohio and the voters have warmed to him. Today, Kasich’s standing in Ohio is as good, if not better, than his big-name Republican colleagues in other states.

“If we were having this conversation 18 months ago, Kasich would’ve been close to the top of that wish list of Democratic opportunities,” says Nathan Gonzales, deputy editor of the Rothenberg Political Report. “Democrats still want to defeat him, but I think there are Democrats that are more optimistic about beating Rick Snyder, Tom Corbett, Rick Scott.”

What explains the Kasich’s renaissance?

One answer is Ohio’s economy. By some measures, it’s improved under Kasich. The state’s unemployment rate is 7.1 percent, down from 9 percent when Kasich took office, lower than the national average, and tied for lowest in the Rust Belt. (Ohio’s job growth, on the other hand, has lagged behind the nation’s.)

But economics alone don’t explain why Kasich has recovered. His revival is partly a product of a policy agenda that is more diverse and unorthodox than the other Class of ’10 governors, says University of Akron political scientist John Green. Unlike Scott Walker, Kasich didn’t always hew to the Republican party line or try to appease the conservative base. And he certainly didn’t try to make friends with Democrats or the unions. “He’s certainly angered a lot of different groups,” Green says. “So far the governor’s managed to not annoy them all at once.”

In February, Kasich unveiled his new state budget. His plan called for cutting state income taxes but paid for that cut with a “fracking tax” on oil and gas companies drilling in Ohio. State Republicans love tax cuts, of course, but fiercely opposed the fracking tax. But that was nothing compared to the reaction elicited by Kasich’s plan to expand Medicaid using Obamacare dollars.

Kasich, for his part, has campaigned hard in support of his Medicaid expansion, traversing the state to make the case for giving about 275,000 additional low-income Ohioans government-funded health care. In his 2013 State of the State speech—which he delivered in the town of Lima and not in Columbus, the capital, much to the chagrin of state lawmakers—Kasich sounded like a Democrat as he passionately defended his Medicaid plan by describing the people it would help. “What are we going to do, leave them out in the street, walk away from them when we have a chance to help them?” he asked. “The program provides a pathway for these individuals to get basic health care from a doctor.” He added, “I will not accept the fact that the most vulnerable in our state should be ignored. We can help them.”

The Ohio Liberty Coalition, a tea party group, said Kasich’s Medicaid expansion was “a slap in the face.” The OLC and other conservative groups have protested Kasich’s public appearances. State Republican lawmakers aren’t interested in Kasich’s agenda. They ripped his proposed Medicaid expansion out of their budget plan. They cut his fracking tax. They replaced his plan to slash income taxes by 20 percent over three years with a plan of their own. And they rewrote his entire school funding formula. “House GOP shreds Kasich’s priorities,” read the headline in the Columbus Dispatch.

Akron’s Green says that Kasich’s spats with fellow Republicans, not to mention the unions and the Democrats in the minority, recall another Ohio governor, Democrat John Gilligan, who held office in from 1971-75. Gilligan was brilliant on policy, Green says, but not much for political gamesmanship. He plowed ahead with an ambitious policy agenda but in the process irritated too many people in both parties. “He just couldn’t manage all of this and he ended up losing,” Green says. For Kasich, the question is whether he can keep all of Ohio’s competing factions at bay well enough to get reelected—something Gilligan failed to do.

But if there’s a rift between Kasich, GOP lawmakers, and the conservative base, his standing has never been better with everyday Ohioans. For all the people he’s pissed off, Kasich has succeeded in repairing his image with voters. In March, his approval rating hit 53 percent, the highest of his tenure, while just 32 percent disapproved of the job his performance so far, according to a Quinnipiac University poll. “I think his different campaigns, especially his campaign for the Medicaid expansion, even though it failed and he can’t get his party to back him, it made him look like a softer, more caring guy,” says Bill Binning, a political scientist at Youngstown State University. “It softened up his image a little bit.”

Kasich’s reelection is far from assured. He faces a potentially tough challenger in Democrat Ed FitzGerald, a former FBI special agent who now runs Cuyahoga County, which includes Cleveland. What FitzGerald lacks in political experience and name recognition, political observers say, he makes up for in youth, a by-the-bootstraps life story, and an impressive CV outside of politics.

Kasich also has to worry about threats from inside his own party. Republican state lawmakers could put him on the spot with controversial legislation between now and Election Day. For instance, the Legislature is already considering right-to-work legislation that would gut organized labor’s clout in Ohio. Post-SB 5, Kasich said he wouldn’t support right-to-work legislation, and he has yet to take a position on the newest bills. If the Legislature passed a right-to-work bill and sent it to Kasich’s desk, it would be a lose-lose proposition: Sign it and he risks another war with the unions. Veto it and he feels the wrath of conservatives statewide.

But for the time being, Kasich is in a pretty good spot, Binning says. “He’s catching on to what it is to be an Ohio governor,” he says. “But there are lot of land mines out there that could trip him up.”