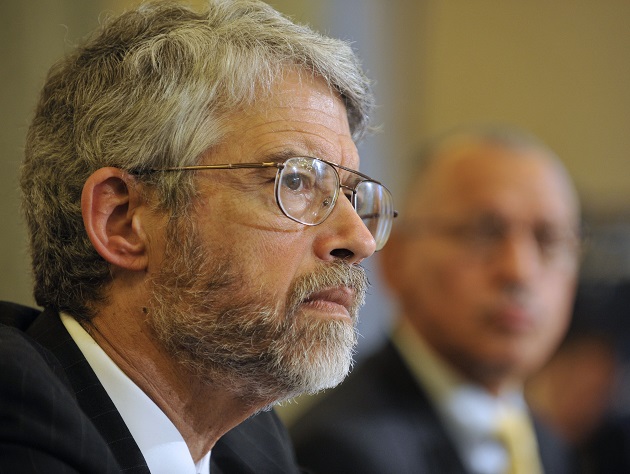 Last week, amid the media furor over the “polar vortex,” the White House did something pretty unusual. It released a highly produced scientific video titled “The Polar Vortex Explained in 2 Minutes.”

In the video, White House science adviser and physicist John Holdren dismantles silly claims that cold weather refutes global warming. “The fact is that no single weather episode can either prove or disprove global climate change,” explains Holdren. He then describes how, in fact, climate change could make extreme winter weather in the mid-latitudes more common. “A growing body of evidence suggests that the kind of extreme cold being experienced by much of the United States as we speak is a pattern that we can expect to see with increasing frequency as global warming continues,” Holdren asserts. Watch it:

Climate wonks and climate communications specialists say that the video is a nice piece of work. (So far, it has been seen by over 140,000 people, much more than other White House videos featuring Holdren.) They also note that it is rather daring in its willingness to endorse the still-contested hypothesis that Arctic warming is disrupting the jet stream and contributing to many ensuing weather extremes. “It was truly breathtaking to watch Dr. Holdren embrace our Arctic linkage idea with such conviction,” says climate scientist Jennifer Francis of Rutgers University, who has been the leading proponent of the theory.

What stands out most about the video is the fact that it exists at all. “A two-minute video on the polar vortex? It is the first time I’ve ever seen anything like that coming out of the White House on this issue,” says Nick Sundt, a former student of Holdren’s at the University of California-Berkeley who is now communications director for climate change at the World Wildlife Fund.

Indeed, there have long been lamentations within climate change circles that Holdren, a highly credible scientific figure who known for his ability to grandly synthesize data to present the true scope of the climate and energy challenge, hasn’t been better deployed by the White House. The prominent climate science blogger Joe Romm even directly charged in 2011 that David Axelrod and the “White House communications shop” had been “muzzling” Holdren.

It didn’t help that early in the Obama years, Holdren was a particular target of right-wing commentators, who suggested, based on a textbook he coauthored with Paul and Anne Ehrlich in the 1970s, that he was a proponent of coercive population control methods. The charge was misleading, but it got a lot of airtime.

Whatever the reason, major public communication and education moments are not what we’ve come to expect from Holdren during the Obama administration. “Holdren has not been allowed to do what Holdren should have been allowed to do on climate change,” adds Rick Piltz, a Bush administration climate science whistleblower who now runs Climate Science Watch. “And this thing on the polar vortex only scratches the surface of my disappointment about that, unless there’s a lot more coming.”

Maybe there is. After all, in mid-2013, President Obama shifted his message on climate change, from one focused on energy and “green jobs” to one focused on extreme weather and preserving the planet for future generations. At the same time, the administration rolled out a comprehensive climate change action plan based on three pillars: cutting carbon, climate adaptation, and international policy accords. The White House Office of Science and Technology Policy, which Holdren runs, also seems more interested in outreach of late. Last year, it debuted “We the Geeks,” a Google Plus hangout series on science and innovation.

“I think that the administration as a whole is increasingly seeing climate as among its most important legacy issues,” says Paul Bledsoe, a senior fellow at the German Marshall Fund and former Clinton White House climate aide. “And obviously science is at the heart of the climate problem, so it’s just incredibly important and powerful that John is speaking.”

Holdren’s office did not respond to requests for comment.