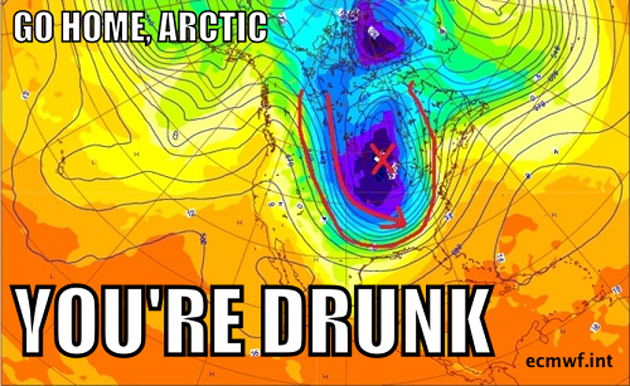 UPDATE 1/22/2014: This article was originally written during the first extreme cold snap of 2014, which occurred in early January. But after checking today with Rutgers climate researcher Jennifer Francis, I confirmed that the jet stream is still in the same broad pattern described below, which has again allowed for a southward invasion of frigid Arctic air. When asked whether the Arctic was drunk again, Francis responded, “Yes, still drunk. In fact, it never sobered up after the last binge.” Below, with Francis’s help, I explain how global warming could be making these loopy jet stream patterns more common, contributing to cold weather in the mid-latitudes even as the Arctic warms. —CM

Perhaps the best analogy yet for the insane cold weather now afflicting the US came from science blogger Greg Laden, who created the viral image above. “Go home, Arctic,” it reads. “You’re drunk.”

When it comes to the reason why the United States is currently experiencing life-threatening cold—with temperatures in the negative-20s in the Upper Midwest, and wind chills much lower than that—that’s actually not so far from the truth. “It’s basically the jet stream on a drunken path going around the Northern Hemisphere,” explains Rutgers University climate scientist Jennifer Francis. In other words, we’re experiencing record-breaking cold temperatures because a wavy and elongated jet stream has allowed frigid Arctic air to travel much farther south than usual.

And according to Francis’ research—which has drawn increasing attention in the past few years—we’re seeing more of just this kind of jet stream behavior, thanks, at least in part, to the rapid warming of the Arctic.*

To understand how it works, it first helps to think of the jet stream as a river of air that flows from west to east in the Northern Hemisphere, bringing with it much of our weather. Its motion—sometimes in a relatively straight path, sometimes in a more loopy one—is driven by a difference in temperatures between the equator and the north pole. Southern temperatures are of course warmer, and because warm air takes up more space than cold air, this leads to taller columns of air in the atmosphere. “If you were sitting on top of a layer of atmosphere and you were in DC, looking northward, it would be like looking down a hill, because it’s warmer where you are,” explains Francis.

The jet stream then flows “downhill,” so to speak, in a northward direction. But it’s also bent by the rotation of the Earth, leading to its continual wavy, eastward motion.

As the Arctic rapidly heats up, however, there’s less of a temperature difference between the equator and the poles, and the downhill slope in the atmosphere is accordingly less steep. This creates a weaker jet stream, a jet stream that meanders more or, if you prefer the new analogy, staggers around drunkenly. “As the Arctic continues to warm, we expect the jet stream to take these wild swings northward and southward more often,” says Francis. “And when it does, that’s when we get these particularly wild temperature and precipitation patterns, and they tend to stay in place a long time.” (For a more thorough explanation, see here.)

That’s not to say the jet stream never staggered around drunkenly in the past. It did. But Francis thinks this is happening more often, and the result is all manner of weather extremes, including both cold snaps and also record heat. (Not every scientist agrees; for the debate over Francis’s work, see here.)

Thus, it is not at all nuts to draw a connection between extreme weather, including extreme winter weather, and climate change. In fact, what would be truly stunning would be if the dramatic warming of the Arctic were not affecting the weather.

* This sentence was updated to reflect Francis’s view that Arctic warming may not be the sole cause of these jet stream patterns.