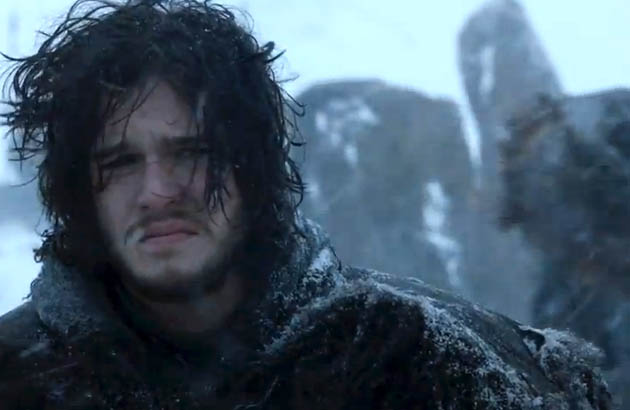 George R.R. Martin’s wildly popular Game of Thrones saga—whose third season just launched on HBO—is, on the broadest level, a story driven by climatic change. “Winter is coming,” warn the ill-fated Starks, a family of northern nobles who help guard the realm from the frozen beyond. In Martin’s world, winters and summers vary in length and can for last years or even a generation—and as the books advance, a devastating winter begins to descend, forcing southward migrations and an intense test of mettle to see who can literally stand against the cold.

Back on Planet Earth, our own weather has felt distinctly Game of Thrones-like lately—depending heavily, of course, upon where you live. But if you’re in the northeastern United States, 2012 felt like a long summer, with scarce any winter at all—whereas early 2013 featured a snowy winter that has felt like it won’t end (though it finally does now seem to be letting up). See here for a graphic of March temperature anomalies in 2012 and 2013, courtesy of Climate Central, proving this perception isn’t merely subjective: 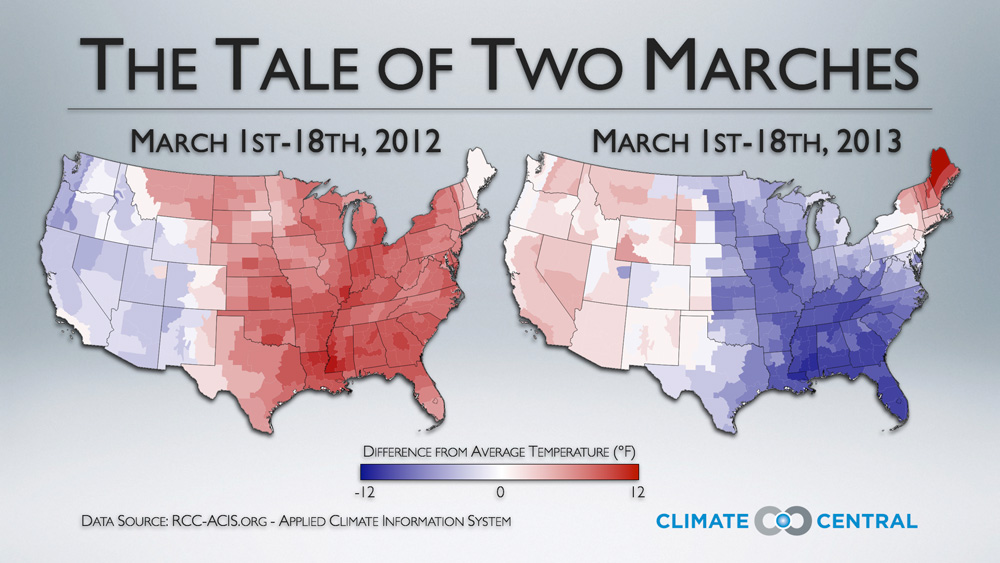 The United Kingdom—a kind of homeland for Game of Thrones, in that the books are inspired by England’s historic “Wars of the Roses,” and the gigantic ice wall in the north of the fictional Westeros is modeled on Hadrian’s Wall, built by the Roman emperor to protect against tribes of Britons—is also undergoing a staggering winter this year. A recent Daily Mail report features disturbing pictures and video of sheep frozen to death in giant snow drifts, noting that the current freeze is threatening to persist throughout April.

So what’s going on here? Could climate change actually give us a Game of Thrones world with longer, or at least more variable, winters and summers? On an admittedly much more modest scale—we’re working with mere physics here, not a recurring meteorological conflagration between good (heat) and evil (cold)—the answer may be yes.

One key factor behind the UK’s and East Coast’s supercharged winter of 2013 is the odd behavior of the jet stream, the high-level river of air that meanders from west to east in the mid-latitudes of the Northern Hemisphere. Jennifer Francis, a climate scientist at Rutgers University, explains that climate change is weakening the jet stream through an unexpected mechanism—the dramatic melting of ice in the Arctic. And this, in turn, is leading to more fixed weather patterns—whether hot or, alternatively, intensely cold—across the globe.

“What’s been happening is this big trough parked over the Eastern US, and also over western Europe,” says Francis of the current conditions. “And in both cases, because the jet stream has been in a very wavy pattern, these troughs have been very slow to move, basically parked most of the time in the same spot.”

Francis’s research has garnered increasing attention of late, as planetary weather seems to have gone increasingly haywire. Here’s how her theory works (for a scientific lecture with massively more details, see here):

As the Arctic grows warmer, and does so at a much more rapid clip than the mid-latitudes, this lessens the relative temperature difference between areas to the north and south of the jet stream. And that slows it down: The jet stream is literally like a river of air, which flows “downhill” from regions of denser, warmer air to regions of less dense, colder air. But if there’s less of a temperature gradient from north and south, the jet stream won’t flow as rapidly.

When that happens, Francis says, things get “stuck.” “When the jet stream is weaker, it is more easily thwarted from its path,” she says. “And it tends to meander more.” This can leave in place, for longer, a given set of weather conditions—whether unusually snowy or, alternatively, unusually warm.

Indeed, Francis explains that the mechanism is the same one as what we saw last year in the United States, when things seemed abnormally warm, rather than abnormally cold. “You can look back to last year, and remember that we were basking in record breaking heat,” she notes. “But it’s the same reason.” Once again, the jet stream was “stuck”—only, last year, that left the highs and lows in different places.

Of course, the jet stream isn’t the only factor helping to deliver more intense winters. There’s also more water vapor in the atmosphere as it heats, and that means that when you have a snowstorm, it can dump more precipitation. So if you have wintry weather patterns stuck in a given place, and more water vapor in the atmosphere—well. Winter is coming, says the forecast.

I asked Francis about Game of Thrones, and she confessed she doesn’t watch it. But as I explained the basic scenario, she commented: “There will always be a summer and a winter. But it could be that the transition seasons, the springs and the falls, will not be as gradual. There might be a tendency to go from a pretty chilly situation right into a very warm situation.” And, as usual, human civilization wasn’t built for any of this. Our buildings, our cities, our rhythms of ordinary life: They’re kind of like those crumbling, unmanned towers along the Wall in Game of Thrones. And our climate scientists? They’re kind of like the Starks and the Night’s Watch: The only ones who can see the danger that’s coming, but amid all the petty politics, they’re being totally ignored.