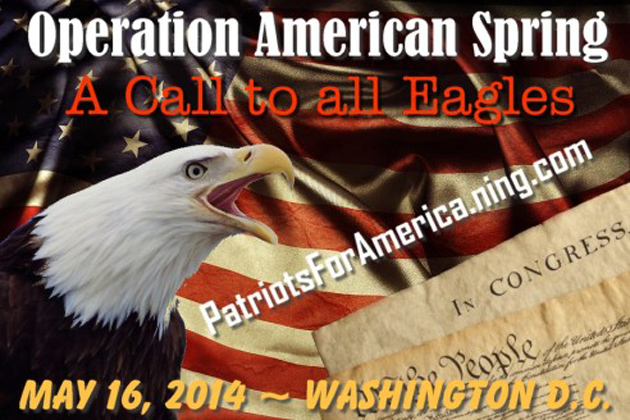 Harry Riley has a dream. On the morning of May 16, somewhere between 10 and 30 million (estimates vary) God-fearing patriots will assemble in Washington, DC, for what Riley, a retired Army colonel from the Florida panhandle, is calling “Operation American Spring.” They’ll protest outside the White House by day and set up in campgrounds and RV parks outside the city by night. They won’t leave until President Barack Obama, along with Attorney General Eric Holder and congressional leaders of both parties, resign and appear before a specially convened investigative tribunal for further disciplinary action—a polite version of a tea party coup. It’s not likely to happen—but two former Fox News personalities have endorsed the endeavor.

“We have 1.8 million definite militia members coming,” promises Operation American Spring spokeswoman Karen Smith. (The Anti-Defamation League pegs the number of American militia members at about 20,000.) “Other than that, we’re not keeping a list of concerned people or whatever because how are we gonna do that?”

According to Riley’s introductory note, which he posted on Facebook, about 1 million activists will stick around DC after the march in a nonviolent attempt to shut the city down. According to the the document, the real work will occur after the transfer of power: “Those with the principles of a West, Cruz, Lee, DeMint, Paul, Gov Walker, Sessions, Gowdy, Jordan, Issa, will comprise a tribunal and assume positions of authority to convene investigations, recommend appropriate charges against politicians and government employees to the new U.S. Attorney General appointed by the new President.”

Riley’s backers are an eclectic bunch. Erik Rush, a conservative columnist and occasional Fox News analyst who starred in Sean Hannity’s 2012 special The Real Barack Obama, has promoted the event on his website and his radio show. Jim Garrow, a conspiracy theorist who predicted that Obama would attempt to distract from the group’s message by revealing the existence of extraterrestrial life, is also on board. Retired Gen. Paul Vallely, who was Fox News’ senior military analyst during the invasions of Iraq and Afghanistan—a period in which he closely coordinated with Pentagon officials—gave the event a thumb’s up in a radio interview.

This is hardly the first far-fetched effort from the far right to replace Obama through peaceful demonstrations. In 2010, Kate Vandemoer, a birther activist, announced the Usurpathon, a “Rolling ‘Velvet Revolution’ to Remove the Usurper, et al,” from office. The plan was to bring 10,000 protestors to the Mall, Congress, and the White House to lay siege to the administration. Two people showed up.

In October, the “Truckers Ride for the Constitution” rally, led by a hodgepodge of conservative truck drivers, was held outside Washington, with the aim of arresting House Minority Leader Nancy Pelosi (D-Calif.) and Sen. Diane Feinstein (D-Calif.). Organizers expected thousands of people to attend. Thirty truckers showed up, led by a woman who believes that Obama and Osama bin Laden are the same person. (“They have same height, bone structure, hands and ears both are left handed,” she noted in a YouTube comment). Two days later, somewhere between a few hundred and a thousand demonstrators convened on downtown Washington for the “Million Vets March.”

For Riley & Co., the stakes couldn’t be higher. “My knees will not touch the surface as a result of some piss ant occupant of the White House or a corrupt legislator, or outside element,” Riley wrote. “I will fall to my death standing if necessary.”