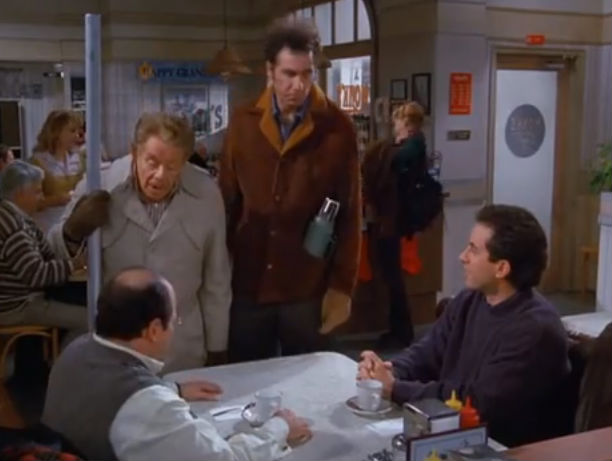 A fake holiday popularized by Seinfeld has become the symbol of secular pushback against religious dominion over American public life. Or something like that.

The Wisconsin and Florida state capitols currently have Festivus poles on display. To the uninitiated, the Festivus pole is a key component in the celebration of Festivus, a bizarre and agonizing December 23 holiday made famous by “The Strike,” a 1997 episode of the beloved NBC sitcom Seinfeld. Since the episode aired, the holiday has taken on a life of its own. House Majority Leader Eric Cantor (R-Va.) has thrown Festivus fundraisers, for example. And at the Florida Capitol in Tallahassee on Wednesday, self-proclaimed “militant atheist” activist Chaz Stevens erected a 6-foot Festivus pole made out of empty Pabst Blue Ribbon beer cans in the state house rotunda in protest of the privately funded nativity scene at the capitol.

Harry Mihet, of the “religious liberty” law firm Liberty Counsel, called Stevens’ views “extreme” and his display offensive. “Is this how PC we’ve gotten in our society, really?” Fox News host Gretchen Carlson said on Tuesday. “I am so outraged by this. Why do I have to drive around with my kids to look for nativity scenes and be like, ‘Oh, yeah, kids, look. There’s Baby Jesus behind the Festivus pole made out of beer cans!”

So what does the man responsible for the world’s long love affair with Festivus think about all of this?

“Am I to understand that some humanoid expressed outrage that the baby Jesus was behind a pole made of beer cans?” Dan O’Keefe, who co-wrote the Seinfeld episode, tells Mother Jones. O’Keefe (whose other credits include The League, The Drew Carey Show, and Mike Judge’s upcoming Silicon Valley comedy on HBO) claims he hadn’t even heard the Festivus-pole protest news until Mother Jones reached out to him. But having Googled around a bit, he’s rendered a verdict.

“Both displays have equal right to be there,” he says. “But, you know, the Fox News outrage machine kicked into high gear, and I’m sure there were some hair-sprayed talking heads bobbing up and down, being outraged about it.”

O’Keefe describes himself as a “Markos Moulitsas progressive.” During the 2004 election, he contributed $100,000 to Texans for Truth, an anti-Bush group—formed in response to Swift Boat Veterans for Truth—that was accused of violating campaign fundraising laws. (He claims that, for this, he was subpoenaed by the Federal Election Commission on his birthday.) So, yes, O’Keefe had plenty to say about some of the conservative and religious reactions to a pole in Florida.

“I was honestly surprised anyone gave a flying fuck [about Festivus].”

“Look, I’m looking at a Christmas tree right now, and no pole made of beer cans is going to come into my house and knock it down, at least that I’m aware of,” he says. “I don’t think it has the Mordor-like, sinister political significance that’s being attributed to it by right-wing talking heads…It’s a manufactured news event. The intention of the newscast is to feed the false War on Christmas narrative that is everywhere.”

But does O’Keefe agree with Stevens’ argument that the Tallahassee nativity scene violates the separation of church and state? Well, not really—but he’s still lightly cheering him on.

“If it’s not publicly funded, I don’t see it as violating the separation of church and state, but at the same time I could see why someone would want to counter [anything that seems like] state embrace of any specific religion,” he says. “So good for him.”

Sixteen years ago, O’Keefe and his family gave the world Festivus—by accident. Before Seinfeld‘s ninth season, it was the O’Keefe family’s annual tradition, invented by his dad—a big fan of Pabst Blue Ribbon, coincidentally. “It was fucking weird, man,” O’Keefe recalls. “It did not have a set date…We never knew when it was going to happen until we got off the school bus and there were weird decorations around our house and weird French ’60s music playing.” The pole itself, however, was an invention of the Seinfeld writers room, and the episode’s other two writers Alec Berg and Jeff Schaffer. One day in 1997, one of O’Keefe’s brothers let it slip to a member of the Seinfeld staff that this family holiday existed, and the crew thought thought was funny enough to write into the series. “I didn’t pitch it. I fought against it,” O’Keefe says. “I thought it would be embarrassing and drag the show down, but…Jerry liked it.”

At the time, O’Keefe had no idea that his father’s weird little tradition would leave this kind of mark on popular culture, much less be at the center of religious or political debate.

“I was honestly surprised anyone gave a flying fuck,” he says. “For better or worse, this is the most recognizable thing I’ve ever done on TV…which is to say my career peaked at age 26, maybe…But I am honored to have this wart on a very lovely pair of buttocks in the pop-culture spectrum.”