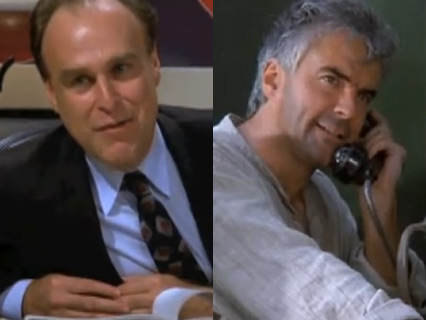 It’s confirmed: Not all of Elaine Benes‘ bosses vote Republican.

A couple weeks ago, I dug through campaign data and found a bunch of underreported and surprising celebrity campaign contributions (A-Rod going to bat for Romney, Miami Vice‘s Don Johnson shelling out for Obama, etc.). In the glut of data was actor John O’Hurley, best known for his role as catalog executive J. Peterman, Elaine’s idiosyncratic boss on Seinfeld. (You might also know O’Hurley from his work as a host on Family Feud, Professor Beltran on Sabrina, The Teenage Witch, or his fundraising for Mark Cuban’s Fallen Patriot Fund.) O’Hurley gave $1,000 to Romney’s 2012 campaign.

Shortly after the story ran, Mother Jones received this email from a one Richard Fancy, residing in Southern California:

I played Mr. Lippman, Elaine Benis’ first boss on Seinfeld, and I just want you to know that not ALL of Elaine Benis’ idiosyncratic bosses support Mitt. I’m a proud, nervous Obama supporter.

(We have Seinfeld fans in the DC bureau. You can imagine our immediate reaction to this.)

You might remember Mr. Lippman: He was Elaine’s boss at a New York publishing house called Pendant Publishing. He fired George after George had raucous sex with the cleaning lady in an office cubicle. He sneezed on his hands in the presence of Japanese businessmen, thus setting off a chain reaction that results in the near-demise of Elaine’s professional life.

Actor Richard Fancy, with his wife Joanna (and under her name), has donated around $650 in total across the board to Democratic candidates, including Tammy Baldwin, Elizabeth Warren, and Obama. “Obama doesn’t excite me; he campaigned on ‘hope,’ which is bullshit,” Fancy told Mother Jones during a subsequent phone conversation. “But Democrats basically believe in giving back some of the money they’ve stolen…My fear is that if Mitt Romney is elected, he won’t have the freedom that a rich white man usually does, and he’ll be controlled by the dominant sect of the Republican Party that’s become crazified.”

Fancy is also noted for his character-actor work on films like Oliver Stone’s Nixon (in which he played Defense Secretary Melvin Laird), the 1984 miniseries George Washington (he played Samuel Adams), Being John Malkovich, the heartfelt teen sex romp The Girl Next Door, and the vastly underrated Psycho Beach Party. And he also has a lot of TV credits to his name, including the daytime soap General Hospital, and a role as Vulcan captain Satelk in the Star Trek franchise: 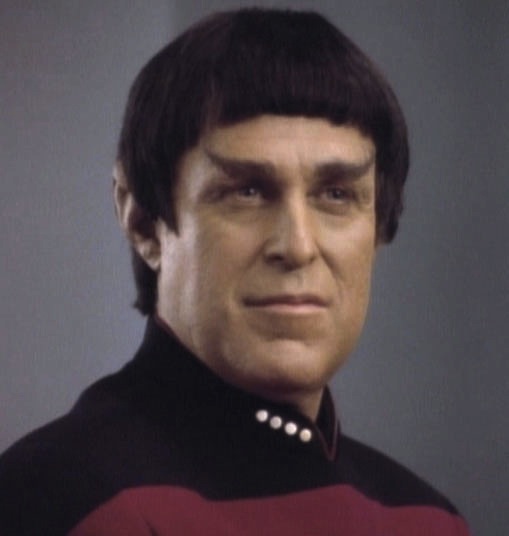 Not the only Vulcan who supports the incumbent this year. Via Memory Alpha Star Trek Wiki

This presidential election, you’re either a Mr. Peterman voter or a Mr. Lippman voter. Although Mr. Pitt would probably vote for Virgil Goode, so there’s always that.