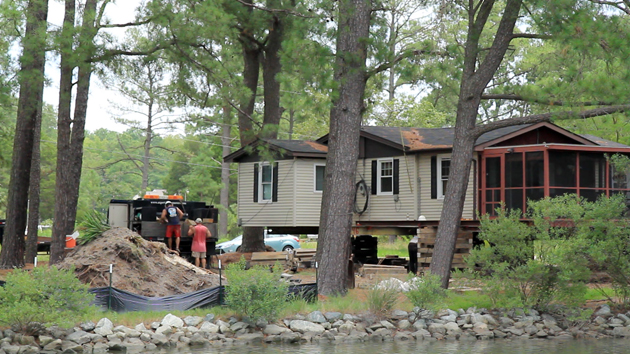 Federal agencies are required to clear the way for more climate change adaptations, like this house being raised out of the floodplain in Virginia. James West/Climate Desk

Just a few days after the Treasury Department announced it would no longer back funding for most overseas coal-fired power plants, today President Obama issued a new executive order that lays the groundwork for how the US will prepare for climate change within its borders. The order is the latest in a series of policies stemming from the president’s Climate Action Plan; earlier this year, for example, the administration issued new greenhouse gas emission limits for power plants and cars. But rather than addressing carbon pollution, per se, today’s plan focuses on how cities and states can prepare for the climate impacts already on the way.

“We need to work on bipartisan solutions, and put politics aside,” said Mayor James Brainard of Carmel, Indiana, a Republican who is one of the local officials taking part in a new advisory task force created by today’s order. “The climate is changing, and we need to be prepared for it.”

So what does the order call for? Here’s what you need to know:

Prioritize climate-ready projects: In the wake of Superstorm Sandy, many civic planning experts called for future infrastructure plans—for bridges, roads, housing development, and the like—to emphasize climate resilience (a popular buzzword among climate wonks that means being able to quickly bounce back from disasters).

Today’s order requires federal agencies to support and incentivize “smarter, more climate-resilient investments” through grants, guidance, and other forms of assistance. These could include moving roads away from crumbling coasts or requiring seaside homes to be built higher above the floodplain. The order also directs agencies to “identify and seek to remove or reform barriers that discourage” resilient investments—for example, policies that currently encourage cities to apply weak rebuilding standards after natural disasters.

“What we’re seeing here is a promise that resources that might have been dedicated just to rebuilding, there would now be a mandate to rebuild in a more resilient fashion,” said Rachel Cleetus, a climate economist at the Union of Concerned Scientists.

The order gives a nod to natural systems, too: Federal agencies are required to look for ways to protect places like watersheds, marshes (which are themselves an important protective barrier from sea level rise), and forests from climate impacts and are directed deliver specific recommendations to the White House within nine months.

Taking cues from locals: Few people know the importance of resilience better than Mayor Dawn Zimmer of Hoboken, NJ, a Democrat who has spent the last year piecing her city—and her own home, which flooded—back together after Sandy. She says local leaders have a unique, boots-on-the-ground perspective that should inform federal climate preparedness policy.

After Sandy, “we learned a lot,” she told Climate Desk this morning. “We could share some of what we’re doing.”

To that end, the executive order convenes a task force with representatives from cities, states, and tribes, including Mayor Zimmer, to produce, within a year, a list of recommendations for the president about what they need from the feds. The task force includes eight governors (all Democrats, except Eddie Calvo of Guam, a Republican) and 14 mayors from places that have been on the front lines of climate change, including towns in coastal Florida and Texas that are fighting off sea level rise, and Ft. Collins, Colo., where over a thousand acres were burned by wildfire earlier this year.

Zimmer said that while the federal government is usually helpful in responding to emergencies, it should be doing much more to encourage cities to invest in climate-proof systems like protected power grids.

“Instead of waiting for the emergency to happen we should be looking at ways to build resiliency before disasters,” she said. “We’re going to need some help from the federal government.”

Brainard, the Republican from Carmel, said mayors are uniquely qualified to weigh in on adaptation. He noted that last year farmers in his state suffered from a crippling drought that struck across the Midwest.

“A lot of people debate why the climate is changing,” he said. “That’s not important. Mayors are very practical people, so the real question is, what are we going to do about it?”

The order also creates a separate group of more than thirty federal agencies—including NASA, the Defense Department, and the Army Corps of Engineers—tasked with working together on climate adaptation plans; just today, the EPA released a draft climate adaptation plan that recommends changes to everything from water pipelines to waste disposal.

Scientists, raise your voices! Obama’s executive order calls for more scientific data about the local impacts of climate change to be made available to policymakers at all levels of government. Specifically, federal data experts will create a climate-focused portal on Data.gov, the government’s clearinghouse for open-source datasets.

Cleetus said the idea is to pave the way for adaptation improvements by removing misconceptions about basic climate science among local policymakers. (Last year, North Carolina lawmakers proposed a bill that sought to outlaw considerations of sea level rise in urban planning.)

“The whole issue has become so polarized that good, scientific information isn’t getting input,” she said. “Hopefully because of this order, people will be more willing to take that into account.”