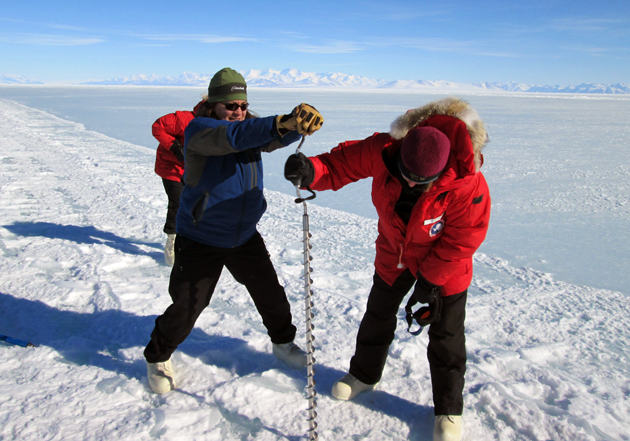 The government shutdown might be over, but for some climate scientists the headache is just beginning. During the shutdown, National Science Foundation-funded research facilities in Antarctica—where some of the world’s most important climate research takes place—were left with a skeleton staff at just the time of year they would normally be coming back to life after a long, dark winter.

On its first day back online, NSF released a statement saying it would salvage the research season “to the maximum extent possible,” without giving a definite timeline. NSF warned that “certain research and operations activities may be deferred until next year’s austral research season.” For scientists studying everything from ocean acidification to earthquakes to seal pups, the 16 days of the shutdown were 16 missed opportunities to collect irreplaceable data.

One of those scientists was Gretchen Hofmann, a marine biologist at the University of California, Santa Barbara, who published a column today in Nature about her frustration with the shutdown and its long-term impacts on basic research. As Hofmann and her peers stand by for word from NSF, we spoke to her about how some of the worst pain from the last two weeks could be felt by the next generation of up-and-coming scientists.

Climate Desk: What have the last couple weeks been like for you?

Gretchen Hofmann: We have a research project that’s funded to study ocean conditions and ocean acidification in the Southern Ocean, the area around McMurdo Sound. That project was supposed to start October 10, and we were going to deploy one of our field team members down there to go retrieve sensors from under the sea ice. The government shut down and we just sat there and thought, ‘Well, I guess she’s not going,’ and sure enough 24 hours before Lydia Kapsenberg, my grad student, was supposed to deploy, her travel was canceled. A week earlier, my post-doc Amanda Kelley, an NSF funded research fellow, was supposed to go down; she flew down there, landed on the sea ice, and literally was told that the station had gone into caretaker mode. So right away, right in my face, front row center, I had two junior scientists that were really heavily impacted by this. Not only because they stand to lose to data and progress in their careers; it was also really upsetting. I mean, they felt really threatened and jeopardized.

“The shutdown, with respect to Antarctic science, was as poorly timed as you could possibly manage.”

CD: You make the point that while there are impacts for everyone working down there, it’s especially a problem for young scientists, post-docs and grad students. Explain why. What’s different about being in that position that makes a missed opportunity like this even more problematic?

GH: The reason that it’s a sensitive life history stage is because, if we talk about Dr. Kelley, she’s a post-doc, and that’s kind of like being an apprentice electrician: You already have your license, in this case a PhD, and she now comes to work with me to really learn about how to be a scientist. During that time, these jobs are really competitive, and you need to be productive. By that I mean you need to do experiments, you need to publish papers, you need to go to science meetings and get out there. And with no data, with a canceled field season, she will not have that. And so that puts her back incredibly.

And grad students, well, forget about it. Many of them have planned to be at McMurdo to do a specific thing that will give them their PhD or their masters degree. And that’s been completely canceled. It’s even worse sometimes for grad students because if they know they’re going to do something down there, they might spend the whole year training to do that; frankly, they’re not doing anything else. They spent a whole bunch of time getting ready to be there, and when that gets canceled, then they’ve got nothin‘. And so a year of their life could be delayed, they might have to stay in school for another year, their advisor might not have funding for them, so it throws them into a really difficult situation that can also involve financial problems. I worry about this every day. People send you their children, and our country depends on this new talent. And so it’s kind of like we’re eating our young in the Antarctic science community if we can’t rescue the field season.

“We’re eating our young in the Antarctic science community if we can’t rescue the field season.”

Amanda Kelley is an unfortunate example of this. She has a two-year fellowship from NSF that just started this summer. She was supposed to work at McMurdo for the field season this October/November, and October/November, 2014, and that’s all the money she has for those two years. And so now, if she loses this field season, she’ll run out of money before she can get a full set of research done. And everyone [at NSF] will do their utmost to rectify the situation, but whereas I stand to lose some data and an instrument and that’s a drag and sets my research back, you know, I’m protected, I’m tenured. And these guys are not.

CD: So why can’t you just go do the same project in a couple months?

GH: The shutdown, with respect to Antarctic science, was as poorly timed as you could possibly manage. The Antarctic has its seasons opposite to ours, and we work in the Antarctic summer. We work when the weather is the best, by which I mean you still get blizzards—summer there is still pretty rugged—but it’s a time when airplanes can fly in and out, it’s not dark all the time, there’s twenty-four hours of sunlight most of the time. I’m a marine biologist, and there are a bunch of us that work on sea ice, and it’s not any different than going ice fishing in Minnesota: There’s a time when you can be on the lake and there’s a time when you can’t be out there, because as the summer progresses the sea ice becomes more unstable, it gets softer and squishier, and you can’t really move around on it, you can’t drive on it. So we close it to science travel. This is going to happen sometime in December.

Other projects are vulnerable because they have what we call long-term data sets. For example, there are the dry valley ecologists who go down in the mountains in Antarctica and measure processes like what creatures live in the soil, and how water moves around in the soil, and they’ve done this for decades. These long-term datasets depend on being able to consistently go out there and get that data. And missing one year for them is a critical loss that could completely scuttle some projects, because you lose continuity.

“Losing these data is like ripping a few pages out a novel about the history of the planet Earth.”

CD: How does one missing season fit in with the larger picture of climate change research? What are we losing, exactly?

GH: With the end of the shutdown, it’s possible that our season could spin up. Frankly, we’ve had blizzards that have shut the station down for a week. So all is not lost, we could still get this going. We’re awaiting word about whether or not, and how, we’ll restart the program. But, if you think about the criticality of long-term datasets, especially about climate, the people who do things like run models that try to predict what’s going to happen in the future, they rely on robust datasets that don’t have gaps in them. When there are gaps, you’re just much less able to forecast the trajectory into the future. Losing these data is like ripping a few pages out a novel about the history of the planet Earth. We just don’t want to lose those pages; we need that data.

CD: Why is Antarctica, in particular, such an important research site?

GH: The cool thing about Antarctica is it’s like Mother Nature’s laboratory. It allows us to do basic science and ask really cool questions, and the Antarctic is one of the last great wildernesses. I work in the Ross Sea, which is one of the planet’s most pristine and least-impacted marine ecosystems when it comes to human impact. And so in global change biology, for a population of an animal or whatever we’re studying, we want to know what’s going to happen. There’s future environmental change, but also impacts from humans: Pollution from the land, overfishing, changing habitat. The Antarctic doesn’t have that. So it’s a place where we can study ecology without a lot of input from human impact. So it’s kind of a really wonderful natural laboratory that tells us a lot about basic science as we see climate change.