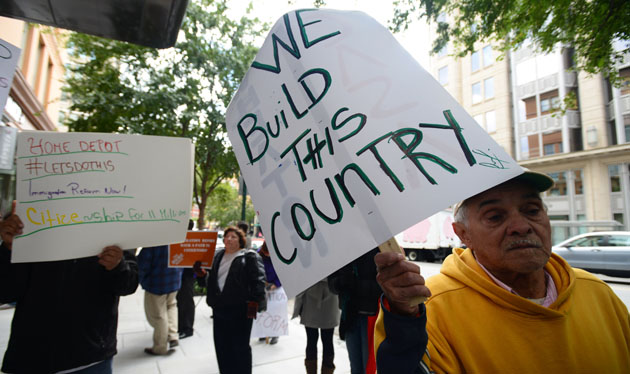 The conversation in Congress’ latest budget meeting Wednesday revolved around the standard issues you’d expect from DC politicians raising a fuss about the deficit: the Democrats argued that raising taxes should be the priority and Republicans pushed cuts in entitlement programs. But a few outliers from both parties offered an alternative route for fixing the fiscal impasse. “I would like to mention one other national priority,” Rep. Chris Van Hollen (D-Md.) said, speaking directly to Rep. Paul Ryan (R-Wis.), “that could both help get the economy moving, help reduce the deficit, and strengthen Social Security. And that would be to pass the comprehensive immigration bill within the House of Representatives. That would accomplish a lot of the goals of this committee, and we simply need a vote to make it happen.”

Sen. Lindsay Graham (R-S.C.) chimed in with a similar argument later in the meeting. “As you look down the road,” he said, “what drives the debt? Eighty million Baby Boomers…are going to retire in the next 30 or 40 years. Who replaces them in the workforce? That’s why I think we need rational immigration reform, because our population growth is pretty much stagnant.”

Odds that the final budget deal will include comprehensive immigration reform are slim to none. Just reaching a budget deal to prevent another shutdown is going to be hard enough. Though the Senate managed to pass an immigration bill with bipartisan support in late June, it was dead on arrival when it reached the House. Republicans in the lower chamber have preferred a piecemeal approach to passing immigration bills in what is essentially a tactic to get the strict border security they want without offering citizenship to undocumented immigrants. Only three House Republicans have publicly endorsed comprehensive reform, and Sen Marco Rubio (R-Fla.) has backed tracked on the Senate bill he helped write.

But Van Hollen is right that a major overhaul of our immigration system could shift the budget numbers. Progressives typically sell immigration reform on humanitarian grounds, pointing to the injustice of expelling undocumented immigrants who have made this country their home. But granting those immigrants official status to reside in the country would provided a boom in government revenue, low-hanging fruit as the budget committee contemplates how to replace sequestration, the onerous cuts imposed after the 2011 debt ceiling deal.

“If they want revenue it’s teed up for them with the Senate bill,” says Marshall Fitz, director of immigration policy at the Center for American Progress (CAP), a left-leaning think tank in D.C. “That would pay for sequestration for the next three years.” The Congressional Budget Office determined that the Senate’s immigration bill would produce massive levels of deficit reduction: $135 billion in savings during the first decade of the law, followed by a whopping $685 billion in the 10-to-20 year window after the law hit the books.

These benefits compound over time, which explains why deficit reduction is much larger in the second decade of the law. “It’s because [new citizens] can pursue a whole range of different jobs,” Fitz explains. “They can pursue additional training. They can float with their feet by changing employers. A lot of them have different skill sets that they’re not able to use. They might have been a doctor or nurse in another country, but now that they’re undocumented they’re in a taxi.”

Conservatives tend to claim that immigration reform is a boondoggle-in-waiting, arguing that the new wave of citizens would just consume government benefits and run the deficit higher. The facts are against them. “Just getting legal status is expected to increase the wages of the legalizing population by 15 percent,” Fitz says. Higher wages lead to higher GDP and, by CAP’s estimate, produce an additional 125,000 jobs per year. As Fitz explains, citizenship would be a boon not only for immigrants’ quality of life, but for the nation’s GDP.