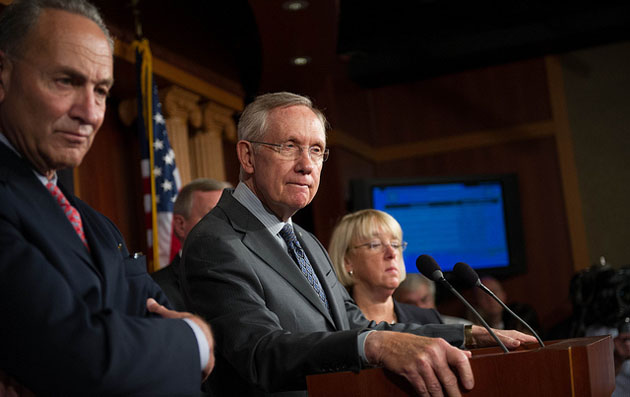 During the recent government shutdown and debt ceiling crisis, Republicans had grand ideas—defunding Obamacare, for example—that they eventually had to abandon when their approval ratings took a nasty turn. But they ended up selling their base on one minor victory, crowing that they had forced President Barack Obama to the bargaining table to hammer out big budget issues.

Now, as the budget conference they demanded holds its first public meeting Wednesday, Republicans and Democrats are disavowing prospects for any “grand bargain,” offering nothing more than hope that a limited deal to shut off sequestration, the automatic budget cuts agreed to during the 2011 debt ceiling negotiations, might be on the table. Democrats are hoisting the threat of further public-relations debacles to convince Republicans that reconfiguring sequestration is in their best interest.

The new budget conference committee, a panel of 22 senators and seven representatives, is a byproduct of the agreement to end the government shutdown and raise the debt ceiling. That continuing resolution kept the government funded through January 15 and created a bipartisan, bicameral budget conference that must present a proposed budget to Congress by December 13. The conference will meet publicly at the Capitol on Wednesday morning but intends to negotiate privately, unlike the 2011 super committee that was notable for grandstanding at public hearings and made little progress toward an actual agreement.

The move away from a grand bargain originated on the Republicans’ side. House Budget Committee chair Rep. Paul Ryan (R-Wisc.), who is spearheading the conference along with Sen. Patty Murray (D-Wash.), his counterpart in the Senate, has set aside his lofty ambitions to privatize Social Security and turn Medicare into a voucher program, at least for the moment. “If we focused on doing some big grand bargain, like those prior efforts … then I don’t think we’ll be successful because we’ll focus on our differences,” Ryan said during an interview with Reuters last week. “Each party will demand that the other compromises a core principle and then we’ll get nothing done.” Senate Democrats share Ryan’s pessimism that the two sides can find a viable compromise on the major budgetary issues. “That is not going to happen this time,” Harry Reid said over the weekend. “There’s not going to be a grand bargain.”

But Democrats remain focused on the sequester. Near the end of the shutdown, Republicans floated the idea of an extended continuing resolution—one that would have kept the government funded through much of 2014. Democrats balked, only agreeing to keep the government funded through January to avoid the next round sequestration cuts. Democrats intend to stick with that same demand if no deal has been reached by the time funding next expires.

They’ve conceded that the level of deficit reduction mandated by sequestration is here to stay but want to redirect those cuts by reducing other programs—farm subsidies, perhaps—and creating a minor increase in revenue by closing tax loopholes that benefit the wealthy.

Although Republicans remain as obstinately opposed as ever to any tax-rate increase, they’ve shown hints that they’ve slowly become exhausted with the sequestration status quo. Last Wednesday, Republicans on the House Armed Services Committee penned a letter to Ryan and Murray explaining their opposition to continued sequestration. They described the cuts in dire terms, noting that further sequestration will force 100,000 soldiers, Marines, sailors, and airmen out of a job. “The most significant threat to our national defense may be the continued reduction to defense funding,” the letter said. Meanwhile, Rep. Tom Cole (R-Okla.), one of the House Republicans assigned to the conference committee, broke ranks last week. “Both sides would like to deal with the sequester,” Cole said in an interview with Bloomberg Television. “And we’re willing to put more revenue on the table to do that, and we would like to do it with entitlement savings.”

Still, if recent debt negotiations are any indication, this latest round of talks may be for naught. So far, the two sides have only negotiated logistics in advance of Wednesday’s meeting, with actual policy talk saved for later. But Democrats believe they’ll hold the upper hand should Republicans insist on maintaining sequestration or continue to stand against any revenue increases.

“The most important thing is that Democrats aren’t going to agree to a deal that just replaces defense cuts,” the aide said—which would require the committee to address sequestration’s effect on the rest of the budget if there’s going to be an agreement.

After the GOP took a PR hit with the shutdown, Democrats are assuming that moderate congressional Republicans will have to strike a deal replacing the sequester, or else they face a life of perpetual short-term funding bills before the 2014 election. Each time the budget comes back up for debate it carries a renewed risk that Ted Cruz and his fellow Tea Partiers will force another shutdown, and that’s an unpalatable reality for Republicans in competitive districts.