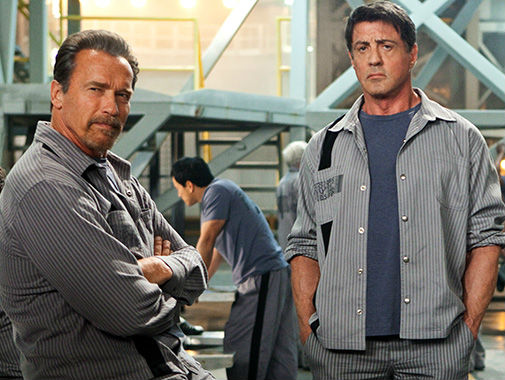 This post contains some spoilers… but it’s the new Ahnold and Stallone movie, so I’m guessing that plot detail isn’t your primary concern.

Former California Governor Arnold Schwarzenegger and hardcore gun-control advocate Sylvester Stallone have teamed up once again, this time for Mikael Håfström‘s jailbreak movie Escape Plan. The film is a vehicle for two legendary action stars to relive their days of vanquishing foes and dropping hot one-liners. “You hit like a vegetarian!” Schwarzenegger spits at Stallone as their characters tussle. But this action flick (written by Miles Chapman and Jason Keller) is also severely critical of military contractors, indefinite detention, solitary confinement, and private prison companies. In fact, the real villain of the movie is the for-profit prison industry. On top of this, Escape Plan presents a vigorous rejection of post-9/11, anti-Muslim fear-mongering. Call it shoot-’em-up liberal escapism, if you will.

Stallone plays Ray Breslin, a prosecutor-turned-security-expert who is paid by the government to test the security of maximum-security prisons—by posing as a prisoner and breaking out of them, of course. His team features 50 Cent as a bespectacled computer nerd, and the Oscar-nominated Amy Ryan as Breslin’s street-smart colleague-with-benefits. Their sweet, lucrative gig is ruined when Breslin is kidnapped and taken to a CIA-backed, privately-run black site that’s like Gitmo on steroids, where the guards torture with impunity (a hose shoved down a prisoner’s throat is a stand-in for waterboarding). The detention facility is described as “completely illegal” by one character. To break out of the prison, codenamed “The Tomb,” Breslin teams up with fellow inmate Emil Rottmayer (played by the Republican Governator), a man locked up for working with “Mannheim,” an international criminal who steals from the rich and gives to the poor. The Tomb’s corrupt warden Willard Hobbs (anti-stem-cell-research personality Jim Caviezel) and his staff of “Blackwater rejects” wage war on Breslin and Rottmayer. And so the fun begins.

The movie is essentially Erik Prince and Corrections Corporation of America vs. a radical-left detainee and Sylvester Stallone.

The fact that this R-rated action film is heavy on gun-toting liberalism isn’t a surprise. Television and Hollywood writers inject crowd-pleasing, left-of-center politics into their thrillers all the time. Hell, even the Fox series 24—the gold standard of right-wing Bush-era messaging in TV drama—often had oilmen, shady business interests, and Republican politicians at the center of nefarious conspiracies. But what is surprising is how extremely Muslim-friendly the film is.

The most badass moment of Escape Plan has nothing to do with Schwarzenegger or Stallone; the best part of the movie is the last stand of Javed (Faran Tahir), the devoutly religious leader of the Muslim prison gang. Sometime in the middle of the film, Javed becomes a loyal ally and friend of Breslin and Rottmayer. He is honorable, smart, courageous, and self-sacrificing. During their grand escape, Javed takes a bullet to the gut. He orders Rottmayer to leave him behind. Following their emotional farewell, Javed grabs his two pistols and proceeds to singlehandedly eliminate a small army of Blackwater wannabes. It’s the movie’s most memorable sequence of close quarters combat.

After Javed finally collapses to the floor in a hail of gunfire, he’s approached by a cold-blooded, well-dressed Hobbs. The Muslim detainee’s last words are the Islamic phrase “Allahu akbar.” Hobbs (played by an actor who is famous for the role of Jesus Christ) says, “Whatever,” shrugs, and then shoots him in the face.

So that’s the new Schwarzenegger-Stallone action movie in a nutshell: Hyper-critical of for-profit prisons and cool with Islam.

Here’s the trailer for Escape Plan:

Escape Plan gets a wide release on Friday, October 18. The film is rated R for violence and language throughout. Click here for local show times and tickets.