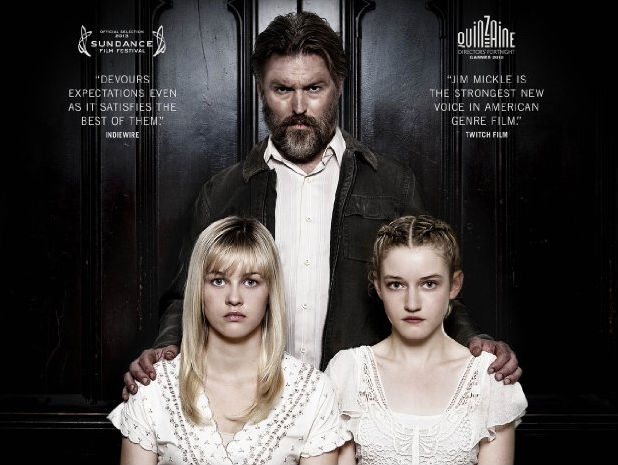 Courtesy of Entertainment One

We Are What We Are
Entertainment One
105 minutes

It’s one of the best scenes in any movie released this year. We Are What We Are, a new horror film directed by Jim Mickle (Mulberry Street, Stake Land) and written by Nick Damici and Mickle, is a family drama heavily influenced by David Lynch and hardcore J-Horror. It’s a remake of the 2010 Mexican feature of the same name, but it stands on its own in style, substance, and shock value.

Both versions tell a story of a family of cannibals; the American incarnation gives us a glimpse into the life of the Parkers, a strictly traditional and twisted clan. Frank (played by Bill Sage), the hyper-religious patriarch, and his teenage daughters Rose and Iris (the hugely talented Julia Garner and Ambyr Childers, respectively) live in a quiet town in upstate New York, where they have long kidnapped, killed, and devoured in the name of god. Things get more insane when a local physician named Doc Barrow (the legendary Michael Parks, an actor who Mickle describes as very much “like your crazy old uncle…[who] says offensive shit all the time, to, like, a room full of strangers”) gets wise to their gruesome tradition.

“I want you to step back and say, ‘Holy shit, I didn’t know I had that in me!’ Until that happens, we won’t be happy.”

The film’s climax is among the most jaw-dropping and compelling this year has had to offer. In a (somehow) gorgeously executed sequence, Rose and Iris take their teeth to the living flesh of an unsuspecting person, fiercely chomping at his skin, arteries, and bone. It’s a moment unique to the American remake—and a scene for which Mickle needed his leading ladies to give it nothing short of their all. “I told them I want you to shock yourself, see how far you can go,” the director tells Mother Jones. “I want you to step back and say, ‘Holy shit, I didn’t know I had that in me!’ Until that happens, we won’t be happy…And they really brought it.”

Damici wrote the crucial scene. Mickle expected it to span two pages, and instead, he received a few sentences. ” I kept saying to him that there’s an ending to this that is…totally fucked-up, totally bitter, totally sweet, and equal parts of all those things…I gave Nick this sort of impossible directive,” says. “‘There’s an ending here! I know there is. I just don’t know what it is.'” The two men began crafting big set pieces in their minds, but kept narrowing the scope more and more. “The simpler we kept it, the better it was,” Mickle says. So when Damici sent over the key paragraph, Mickle fell in love. Others weren’t so sure.

“A couple people read it and weren’t sure about it,” Mickle recalls. “I didn’t care. Usually, I’ll listen to people and hear everyone out. Like, my girlfriend is the lead producer on all this stuff. She was the first other person to read it and said, ‘I don’t know how I feel about this ending.’ And usually she’s right about everything…But this was the only way this movie could end.”

It was the right call to make. The scene fits the well-crafted mold of the rest of the film: Emotional, smart, wickedly exciting drama. Despite what you might expect from something in the cannibal-horror subgenre, the movie is consistently poetic and restrained. The dark and astonishing final minutes are no different. “I wanted it to be beautiful,” Mickle says. “We didn’t want it to turn into a zombie movie. We were going to have it all happen in shadows originally…But the girls did such a good job of not making it a zombie flick—because there’s a conflicted sense to them, and Iris has this sort of awakened sexuality as she’s doing it…It’s all about the character, the gore and extremity of it is the second priority. Beautiful girls, with beautiful dress, with beautiful music—feasting. It’s that catharsis. I want people leaving thinking, ‘What did I think of that ending?'”

If you can stomach it, you should see it for yourself and make up your mind. Here’s a trailer for We Are What We Are:

We Are What We Are gets a wider release on Friday, October 11. The film is rated R for disturbing violence, bloody images, some sexuality, nudity and language. Click here for local showtimes and tickets.