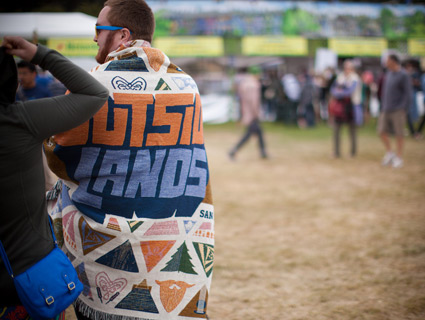 Ever since 2008, when Radiohead powered through fog and sound fuck-ups for an adoring, overcapacity crowd in Golden Gate Park, San Francisco’s Outside Lands Music and Arts Festival has attracted some of the music world’s top talent. With the Red Hot Chili Peppers and Nine Inch Nails at the top of the bill along with Paul McCartney (who recently teamed up with the surviving members of Nirvana for a show in Seattle), this year’s festival would have the lineup for the ages…if it happened to be 1994.

Sure, RHCP are still putting out albums, but their latest dropped to little acclaim two years ago, and the band hasn’t done anything bold or original since 1999’s Californication. (Yes, that was a ’90s album.) The most recent buzz around the band came when a security guard for the Rolling Stones failed to recognize frontman Anthony Kiedis, mistaking him for a superfan and knocking him to the ground as he tried to enter a Philadelphia hotel.

Trent Reznor has a new NIN album coming in early September featuring a strong first single, “Came Back Haunted,” and a David Lynch-directed, seizure-inducing video. But even the video is nostalgic—in a decidedly nightmarish way—featuring a creepy, dark figure that could be the goth sister of the Blind Melon bee girl.

But Sir Paul is a living legend, you say? Sure, he received rave reviews for his Bonnaroo performance, and he’s been touring on a set list that mainly features Beatles songs rather than his often treacly, over-the-top solo work. Yes, most of the crowd will pack in to see him Friday night, while the club kids with no respect for their elders will be dancing at the Pretty Lights show across the festival grounds.

What shouldn’t be overlooked are the talented artists at Outside Lands who aren’t household names. Here are a few alternatives to this year’s headliners that are worth checking out:

If you like Phoenix, check out Midi Matilda (Friday, August 9 at 12:45 p.m. at the Twin Peaks Stage)
Transition from the end of the workweek into the music-fest mind frame by cleansing your palate with the clean, pretty pop songs of this Bay Area indie-electro duo. Midi Matilda’s upbeat, synth-heavy tunes and catchy falsetto choruses should set just the right tone for a jam-packed festival weekend.

If you like the onstage chemistry of Matt and Kim, check out Wild Belle (Friday, August 9 at 2:15 p.m. on the Twin Peaks Stage)
While boyfriend-girlfriend Matt Johnson and Kim Shaffino put out consistently energetic, hook-heavy tunes, the brother-sister duo Natalie and Elliot Bergman’s sound is decidedly sexier. Wild Belle’s music evokes languid dancing on a moonlit tropical beach as Natalie’s Sia-meets-Adele-lite voice purrs and growls over laid-back, rock-steady beats. Check them out especially if you enjoyed Santogold last year.

If you’re looking to make out with someone to D’Angelo, go check out Rhye (Friday, August 9 at 4:45 p.m. on the Sutro Stage)
D’Angelo’s ’90s R&B tracks are oozingly sexual. For a more subtle audio aphrodisiac, go see Canadian/Danish duo Mike Milosh and Robin Hannibal. Hannibal’s mellow electronica beats topped by Milosh’s airy, gender-bending voice make for a mellifluous, seductive vibe. Lately in their live shows, they’ve used creative stage lighting to elude being revealed to their audiences, adding mystery to the set. It’ll be interesting to see how they stage their provocative performance in the late afternoon on Friday.

If you’re heading to RHCP, check out Wavves (Friday, August 9 at 6:15 p.m. on the Panhandle Stage)
If the Chili Peppers are the aging kings of California rock, Wavves, a.k.a. Nathan Williams, is the prince in line for the throne. His sound is noisy, distorted, occasionally shoe-gazey, and at other times a full-on grunge revival. He’s got bratty a song called “I Wanna Meet Dave Grohl,” for chrissakes. Yet while he wears his influences on his sleeve, it’s all done with a fresh take and authentic attitude.

If you’re planning on seeing the Yeah, Yeah, Yeahs, give Thao and the Get Down Stay Down a shot (Saturday, August 10 at 4:40 p.m. on the Sutro Stage)
Like the wonderful Karen Oh, San Francisco hometown hero Thao Nguyen has a truly distinctive voice that anchors every song with emotion and attitude. She blew us away at Noise Pop, and we’re looking forward to another round of her charming pop rock on the Sutro Stage.

If you’re looking for a 1980s revival with Hall and Oates, check out Camper Van Beethoven (Sunday, August 11 at 1:15 p.m. on the Sutro Stage)
My editor says he’s dying inside that I’d include these two bands in the same breath, but bear with me. Hall and Oates have been experiencing a resurgence in popularity thanks to the fact that with the internet, “the younger generation can access the entire history of modern popular music,” as John Oates told journalists at an Outside Lands press conference. Well, any indie rock kid should know who their forebears are, and the influential ’80s college rock band Camper Van Beethoven is among them. Probably best known for its catchy, nonsensical track “Take the Skinheads Bowling,” CVB is celebrating 30 years of off-beat, DIY music making. While they’ve got a new album out that features an ode to Northern California girls, we’d love to see them dust off some of their classics for a whole new generation, including the No. 1 Billboard cover “Pictures of Matchstick Men.”