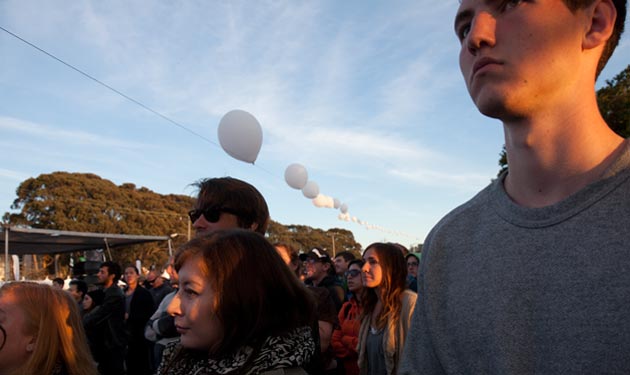 One island, two stages, twenty-five musical acts. This weekend we set our sights on the Treasure Island Music Festival, and over two days plundered the most memorable bits to share. Among them: a new species of stand-up snuggie designed for “adult” outdoor recreation, a marriage proposal, and yes, Best Coast on the “best coast,” lamenting the end of summer. Read on to find out what a “sexy hotness sleeping bag” actually entails.

1. The Girl Talk Marriage Proposal
Having brought the audience to a sweaty, glowstick-bashing stupor, mashup king Gregg Gillis (a.k.a. Girl Talk) ended his set by passing his mic to “a very special guest.” Oh my God, who? Would this be a surprise encore? The crowd whistled in anticipation. “Some people leave their hearts in San Francisco,” said the special guest, taking the mic. “I’m about to give mine away. [Pauses.] Will you marry me?” (She said yes.) —Sarah Zhang

2. Best Coast’s End of Summer Lament
You know, as a native East Coaster with no real frame of reference for California (not counting watching Clueless as a child), Best Coast always struck me as mostly “meh.” The beach I grew up with was in New Jersey, and it really wasn’t something to sing about. Then I saw Bethany Consentino wailing at sunset on San Francisco Bay and it changed my mind. Especially when she took a moment to pause and reflect on the bummer that is the end of summer. Dude! —Sydney Brownstone 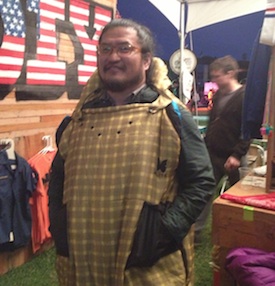 Perfect for spooning in a tent. Sarah Zhang3. Sexy Hotness Sleeping Bags
Move over North Face jackets, this is how you dress for San Francisco nights. We found this guy at the vendor tables of CAMP DYI, Treasure Island’s craft fair. “This sleeping bag is perfect for making out in the woods!” he said. “You can join two together. The purple one is printed with the Kama Sutra inside,” he elaborated. The leg slits definitely make it convenient for, uh, certain activities, but we’re sold just on the idea of walking around in a sleeping bag. (Hello, Snuggie on steroids!) CAMP DYI even held three-legged races in these Sexy Hotness sleeping bags. — Sarah Zhang

4. Ty Segall’s Bratty Bay Area Garage Rock
Forget the tech industry. On the list of things the Bay Area does best, garage rock should be at the top. Thanks to people like Ty Segall (with a nod to Thee Oh Sees, of course), bratty guitars and convulsive shows are having a moment. At Treasure Island, Segall was in his finest form—hoarsely yelping into the microphone and hurling himself through a set of bashing, high-energy hits. No one in the mosh pit was spared. —Sydney Brownstone

5. Joanna Newsom Lives on Treasure Island
Nary was a festival crowd so quiet as during Joanna Newsom‘s Sunday show at the Bridge Stage. Between her nimble harp picking and piano tickling, and that baby-crone-elfin voice—which is disarmingly normal when she speaks—Newsom had a polite tussle with her mic stand and made apologies to the crowd over her struggles to keep from eating her own hair while singing. Toward the end of her set, she asked the audience if we all lived on Treasure Island. “I do,” she said. We believed her. —Maggie Caldwell

6. Divine Fits are the Real Deal
Though they only started playing together less than a year ago, Spoon’s Britt Daniel and Wolf Parade’s Dan Boeckner sounded like more of a cohesive band than ever on Sunday night, ripping through the debut album they released as Divine Fits in August. Aside from having the lanky, iconic, druggy-sexy rocker thing perfected after their respective years as frontmen, it is my humble opinion that the Divine Fits’ cover of Nick Cave’s “Shivers” stole the festival. If you went home early, this is sort of what you missed, though a Youtube video doesn’t do the live experience justice. —Sydney Brownstone 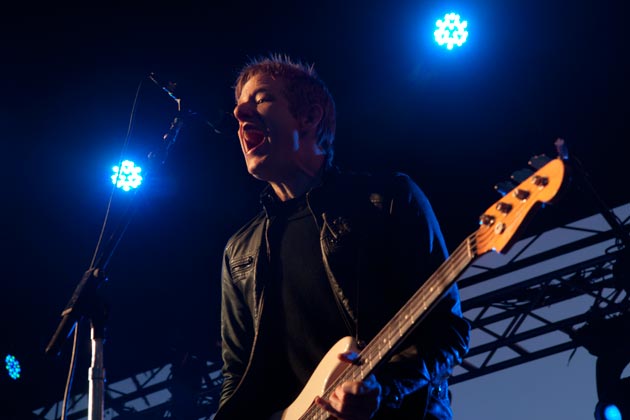 Britt Daniel of Divine Fits. Sydney Brownstone7. SBTRKT is Better than Girl Talk
“SBTRKT is by far the show I’m most excited about,” announced a random drunk dude a propos of nothing as we waited for the British electronic act (pronounced “subtract”). “What about Girl Talk?” we countered, anticipating Saturday night’s headliner. But random drunk dude, you were totally right. SBTRKT broke out beats as sexy as James Blake’s and vocals as yearning as those of LCD Soundsystem. SBTRKT performs behind ceremonial masks to remain somewhat anonymous, but, like spiritual guides, they take you somewhere transcendent. —Sarah Zhang

8. That Guy Holding All the Balloons
An outstanding visual feature of this year’s TI was a line of white balloons, fluttering and arched over the festival grounds. So imagine our surprise when we found out that the entire balloon structure was actually being held at one end by a person who was even able to free up one hand to smoke. It seemed like the coolest job in the world until a group of people offered the balloon-holder Girl Scout cookies, at which point he had to decline because he didn’t have enough hands. —Sydney Brownstone 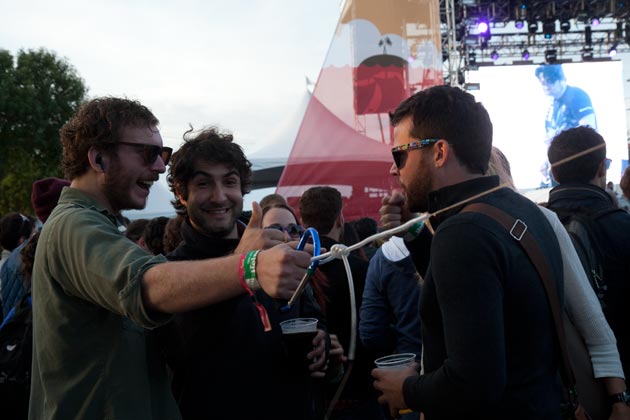 Other people were asking to take turns with the balloons. Sydney Brownstone9. People Who Thought This Was Burning Man, for the Better
For everyone who had to work during this year’s Burning Man week, having dedicated burners show up on Treasure Island with their hula hoops and art cars was a neat surprise. Our hypothesis: They were lured in by the giant, wooden, naked-lady sculpture, although it was never set alight. —Sydney Brownstone

10. The Simple Joy of Bubbles
Away from the music, the festival hosted a variety of interactive art installations and quirky vendors that celebrated San Francisco in all its weirdness. Adjacent to a 60-foot Century Ferris Wheel was a park where you could try out cardio hulahooping, learn how to knit beer cosies, or relax and read a comic book in the back of a box truck filled with beanbag chairs. But for all the multi-sensory offerings, it was the simplest one that left the greatest impression. There’s really nothing so wholesomely satisfying as watching a bunch of little kids freaking out over soap bubbles. —Maggie Caldwell 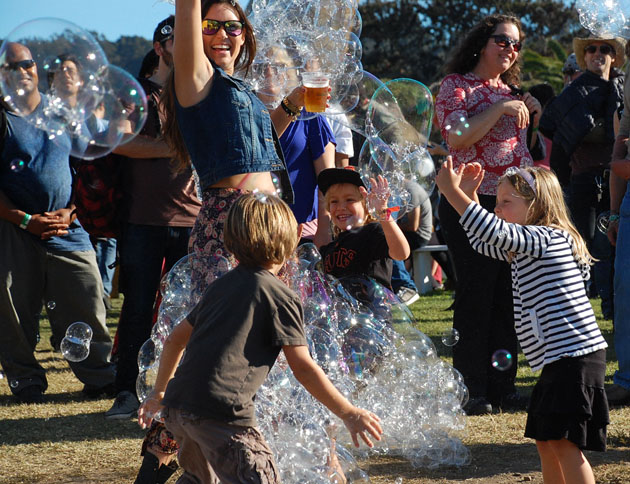 Photo: Maggie Caldwell11. Beth Ditto Reminding Us That We Had to Work in the Morning
At 8:24 p.m. on Sunday, a chilly mist swept across the bay into the festival area and concert-goers began checking their watches and thinking about the next morning’s commute. One minute later, all of that became an afterthought as Gossip frontwoman Beth Ditto sauntered onstage holding a beer in one hand and a smoke and microphone in the other—looking like the most fun person on the island. The band launched into a stream of infectious bass heavy, disco-rhythmic songs with the charismatic Ditto unleashing her powerful voice on the crowd. However, in perhaps an ill-informed decision, the band chose to perform “Get A Job” off their 2012 release A Joyful Noise. As Ditto thundered the chorus, “I’d love to stay and party but I’ve got to go to work. Work, work, work, work, work, work, work, work, work, work, work, work,” a few of us, alas, gathered our belongings and plodded away from the crowd to board the shuttle back to the city. —Maggie Caldwell