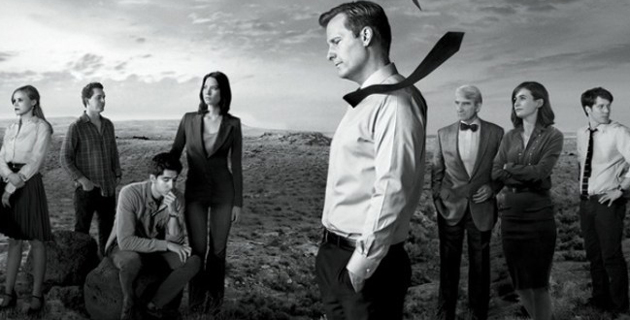 A little over a year ago, the first season of The Newsroom premiered on HBO. Here are the 21 adjectives and four adverbs I used to describe it:

Having had nearly 13 months to reflect on season one, I stand by all 25 words. But here are two words to describe the second season of writer Aaron Sorkin‘s HBO series: Markedly improved.

To everyone else who devoutly hate-watched the 10-episode first season (including those who don’t work in news and media), I am just as surprised as you are. It appears that Sorkin wasn’t lying when he indicated he had taken note of last year’s tidal wave of criticism and made tweaks to the show.

In the first four episodes of the new season (premiering Sunday, July 14 at 10 p.m. ET/PT), much of the generic, holier-than-thou, smart-alecky insufferability has dissipated. The dialogue is sharper and the story arcs are more intriguingly structured. The season (this one running nine episodes) is presented in flashbacks, as the ACN news team are prepped by lawyer Rebecca Halliday (played by Oscar winner Marcia Gay Harden) for a deposition in a wrongful termination suit. (Sorkin is a big fan of framing stories around depositions, as evidenced by The Social Network and Malice, for instance.) The case, as well the flashbacks, focuses on News Night with Will McAvoy‘s broadcast of a since retracted exposé of the alleged government cover-up of Operation Genoa. The black op supposedly involved the US military using sarin gas on Pakistani civilians during a botched rescue mission. This story arc is based on CNN and Time‘s retracted reporting on Operation Tailwind, a covert American mission in southeastern Laos during the Vietnam War.

The new season touches heavily on drones, Occupy Wall Street, and the 2012 election (on board the Romney bus during primary season). The ensemble cast, led by Jeff Daniels, Emily Mortimer, Sam Waterston, Olivia Munn, and so forth, benefit from lines of dialogue that sound more like Sorkin’s Sports Night and less like his hyper-preachy and joyless Studio 60 on the Sunset Strip debacle. Not all of The Newsroom‘s glaring flaws have vanished, though. The series’ main love triangle (quadrangle? pentagon?) is the subplot that won’t mercifully die, and all it does is further showcase Sorkin’s lazy will-they-won’t-they narrative tendencies. Some viewers may once again get turned off by the overall liberal smugness. And nothing here rises to the quality of Sorkin’s critically acclaimed Oscar bait, or his small-screen heyday—the brief era when he was considered by many to be the best thing to happen to television since RCA color first came along (think: The West Wing‘s second and third seasons).

But this time around, The Newsroom is less smug. It’s less childish and more confident. And it’s certainly less alarmingly candy-ass and less maddeningly idealistic. The season is at its best when Sorkin and company forget that their characters are trying to run the Greatest News Program Of All Time, and instead explore how they arrived at their colossal, libelous fuck-up.

Even with the improvements, The Newsroom is not a great TV drama, no matter how much it clearly yearns to be. It has, however, now entered the realm of tolerability, and is perhaps even a worthwhile show. And that’s just enough to give it—with all due caution—a second chance.

Here’s a trailer for the second season: