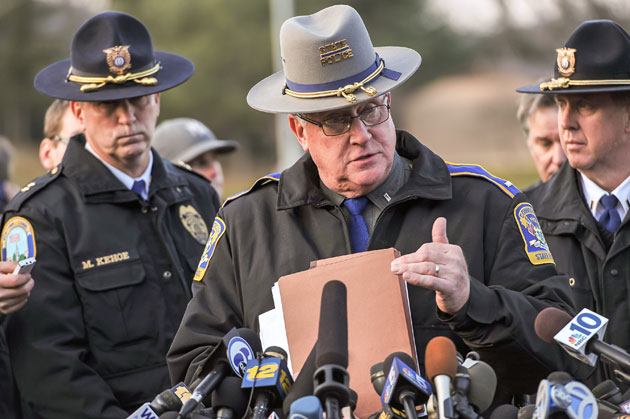 Last week, the Hartford Courant reported that Connecticut’s top prosecutor and aides to Democratic Gov. Dannel Malloy had crafted legislation that could block public access to investigation material from the massacre at Newtown’s Sandy Hook Elementary School, including recordings of 911 calls, death certificates, names of minors who were witnesses, and photographs of victims from the crime scene. The proposal, drafted behind closed doors as an amendment to a bill regarding access to emergency services reports, would allow victims’ families to have the final say on whether photos, videos, or audio “depicting the physical condition of any victim” can be released to the public.

Under existing Connecticut law, investigators don’t release graphic crime scene photos to the public unless they are introduced as evidence at a trial. But they are permitted to release audio from 911 calls, documentation that has been made public elsewhere after other high-profile mass shootings including Columbine and Aurora. (Conversely, police did not release audio of 911 calls made during the Virginia Tech massacre.) The new proposal would still allow access to written transcripts of the 911 calls made in Newtown.

Critics of the proposal helped forestall a vote last week, raising questions about its broader implications and why it wasn’t subject to the normal legislative process, including committee hearings and input from the public. A New York Times editorial on Sunday argued that the “proposal raises grave concerns about whether parents’ sensitivities could block the release of such things as private journals kept by the Newtown shooter,” adding that the journals of the Columbine shooters “eventually provided valuable insight into [their] thoughts.”

The draft of the amendment doesn’t go that far; it aims to protect sensitive information about victims but not the killer. Still, “it is an exemption to disclosure without there being a real, transparent process,” says Colleen Murphy, executive director of Connecticut’s Freedom of Information Commission. That could set a dubious precedent, she says, potentially subjecting future police documents to the control of families victimized by crimes.

Garvin Ambrose, the state’s victim advocate, directly raised that possibility last week, arguing that “this legislation needs to be expanded to include all crime victims.” And Kevin Kane, the chief state’s attorney, whose office helped draft the amendment, told the Courant that he also wanted to expand the proposal beyond the Newtown investigation, saying “that the intrusion of the privacy of the individuals outweighs any public interest” in gaining access to such material.

But in Malloy’s view, Newtown is an exception. “I think there are different circumstances,” he said. “You know, when John Kennedy was assassinated, certain documents were frozen for 50 years.”

Asked whether creating an exception solely for Newtown might perpetuate a spate of conspiracy theories about Newtown, Malloy acknowledged that there has been “a lot of wacky coverage in the blog world” about the shooting, but added, “They’re nuts anyway, okay?” (For example, parents of children killed in Newtown have been accused of being actors in a staged event orchestrated by the federal government to push gun control legislation through Congress.)

A final report from the state police investigation of the massacre is expected to be released in June. Here’s the working draft of the amendment: