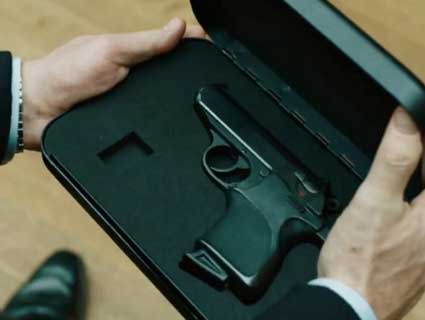 The biometric handgun used by James Bond in Skyfall.MGM

Yesterday in San Francisco, a group of leading Silicon Valley tech investors announced a partnership with the families of Sandy Hook victims that will seek to raise $15 million in seed funding for 15 to 20 start-up companies dedicated to preventing gun violence. “A year from now we will be able to point to the Googles, the Facebooks, and the Twitters of gun safety,” said Ron Conway, a billionaire angel investor who made big early bets on those companies. “This is a huge area for genuine innovation.”

With several Newtown families standing by, the tech investors announced the partnership, the Sandy Hook Promise Innovation Initiative, on the three-month anniversary of the massacre. “In the instance of our shooting, it was the mother’s guns that were used,” said Nicole Hockley, whose first-grader was killed. “Had she had biometrics on the gun, or a different sort of safe technology protecting the guns, then he would not have had access to them in the first place.”

Biometric or “smart” guns use RFID chips, fingerprint devices, or magnetic rings to ensure that they can only be fired by their owners. James Bond used a palm-reading biometric gun in Skyfall, but the only model readily available in the real world is a Smith & Wesson revolver that requires shooters to wear a magnetic ring that releases a trigger lock. Smart guns have been called stupid by both the NRA, which views them as an impediment to self defense, and by the anti-gun Violence Policy Center, which sees them as a marketing ploy to boost firearm sales by convincing people that guns can be safe.

Besides biometric weapons, the group offered few specifics on how technology might cure America’s gun-violence (and gun-suicide) problem. Another grieving Sandy Hook mother, Jennifer Hensel, made a case for better tools to evaluate mental illness. “We need to create technology that allows us to visualize and measure brain functions in an affordable, accurate, and accessible manner,” she said, “so we can understand the landscape of brain health and stop someone from committing a tragedy like these.”

Leaders of the tech group said that their efforts are inherently nonpartisan and not meant to replace the push for tighter national gun control laws. In recent years, Conway, the angel investor, has donated some $200,000 to federal-level politicians and soft money groups, giving roughly equal amounts to Democrats and Republicans, some of whom were running for the same office. Gun control clearly hasn’t been his biggest political priority, but that might not stop him from discovering an investment-worthy business that redefines the term “killer app.”