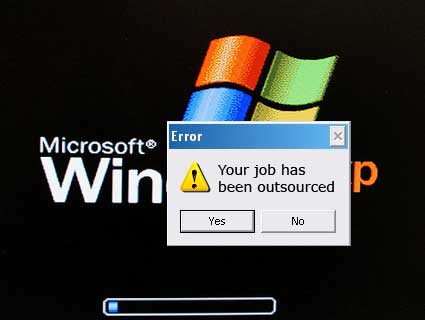 A member of a powerful DC-based coalition of education and labor groups says Microsoft tricked him and others into opening the door to the Immigration Innovation Act, a federal bill that would promote the offshore outsourcing of American jobs.

“It was a classic bait and switch,” says the source, a member of the STEM (Science, Technology, Engineering, and Math) Education Coalition, an umbrella organization of some 500 corporate, labor, and education groups that was cofounded by Microsoft. The source, who asked to remain anonymous for fear of jeopardizing his relationships with allies on Capitol Hill, described Microsoft’s approach to the bill as “lobbying malpractice.”

Though Microsoft did nothing illegal, it appears to have run afoul of its would-be allies by making the bill a vehicle for for significantly looser immigration restrictions—thereby putting its own interests ahead of those of the education and labor groups it had seduced by promising something more palatable.

For more than a decade, Microsoft has supplemented its American-born workforce with foreigners who come to the US on temporary H-1B work visas. The federal government offers just 65,000 H-1B visas each year, however, and in prosperous years the cap quickly maxes out. In September, the software giant claimed it couldn’t fill some 6,000 domestic jobs due to a shortage of qualified Americans and a lack of available visas.

The company proposed a novel workaround: If the federal government would raise the H1-B cap by 20,000 additional visas and make available an equal number of additional green cards, Microsoft said it would be willing to pay nearly four times the usual fees, handing over $10,000 per H-1B visa and $15,000 per green card. It called its proposal the National Talent Strategy because the additional revenue—more than $500 million annually—would be used to fund STEM education programs around the country.

For political support, Microsoft turned to the STEM coalition, a powerful force on Capitol Hill. Its members include corporations such as Time Warner Cable, education nonprofits such as the National Science Teachers Association, and labor advocates such as the Institute of Electrical and Electronics Engineers. Last year, the coalition spent nearly $250,000 lobbying Congress on education issues. But the coalition may have had yet another allure for the tech giant: Its executive director, James Brown, lobbies legislators directly on behalf of Microsoft.

Microsoft’s allies supported raising the H1-B visa cap a bit in exchange for  education funding. But the final bill was something else entirely.

In early December, Microsoft got what it wanted: The coalition signed a letter expressing support for funding STEM education “through a targeted increase in high skilled foreign worker visas and green cards coupled with a significant new contribution by companies…that together would total more than $500 million annually.”

With the coalition in its corner, Microsoft approached a bipartisan group of senators to craft what would become the Immigration Innovation, or “I-Squared” Act. And that’s where the alleged “lobbying malpractice” came in. The act, as promised, would boost the caps on visas and green cards and use the fees to pay for STEM education. But in a crucial difference that has angered some of Microsoft’s would-be allies, the bill would nearly quintuple the number of available visas—raising the cap to 300,000—and charge companies far less for them: as little as $1,825 apiece.

Microsoft, which helped draft the bill, appeared pleased with the end result. “Today’s introduction in the Senate of the bipartisan Immigration Innovation Act is a major step forward,” Brad Smith, the company’s general counsel and executive vice president said in a January press release issued by Compete America, a coalition of tech companies such as Microsoft and outsourcing firms such as Deloitte. “Microsoft strongly supports this legislation and urges Congress to send broader immigration reform that includes these solutions to the President’s desk this year.”

Microsoft played its cards masterfully, one lobbyist told me. “They’re not a multibillion-dollar company for nothing.”

But to labor groups and some educators, the difference between Microsoft’s original offer and what it delivered was night and day. Charging $10,000 for a visa would have priced outsourcing firms out of the market, but charging less than $2,000 while vastly raising the cap would most likely do the opposite.

As it stands, nearly half of the 65,000 H-1B visas issued last year went to offshore outsourcing firms such as Tata and Infosys, which often train foreigners in the United States before hooking them up with jobs with American companies overseas. Moreover, research suggests that a glut of H-1B visas would depress tech wages—bad news for anyone who cares about cultivating science and math students in the United States; the threat of more job competition from foreigners and a lower future earnings potential, the thinking goes, may discourage American students from pursuing careers in those fields.

Under ordinary circumstances, you’d expect a group like the STEM Education Coalition to lobby for higher visa fees and fewer visas, but Brown, the executive director, demurred. “Immigration is not really [the coalition’s] focus area,” he explained in an interview. “Our interest is just this notion of companies contributing to the long-term solution” to a lack of education funding.

Jodi Peterson, the STEM coalition’s chairwoman, told me that she was unaware that Brown also lobbied for Microsoft. “I don’t know much about the immigration issue,” she confessed.

“The I-Squared legislation was developed by a bipartisan group of Senators and it was their decision which provisions they chose to include in their legislation,” a Microsoft spokeswoman explained via email. “While there are differences in the specifics…Microsoft believes I-Squared is consistent with the positions we’ve advocated in our national talent strategy proposal, and is supportive of including these critical provisions as part of broader immigration reform.”

A lobbyist who works on immigration issues described Microsoft’s handling of the education groups as masterful. “They’re not a multibillion-dollar company for nothing,” he told me.

A few days after I began making calls to other members of the STEM coalition, Brown sent me a “draft” of a new, boilerplate letter to Congress clarifying the coalition’s position: Immigration policy, he wrote, “falls outside the scope of the Coalition’s goals.” But he didn’t explicitly say that the group’s stance had changed. “We look forward to working with you to refine and advance this important new STEM education initiative,” the letter concluded.