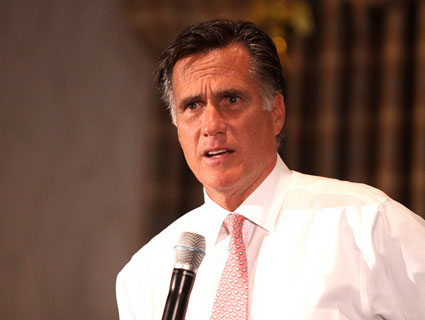 In recent weeks, Barack Obama and Mitt Romney have accused each other of being an “outsourcer in chief,” as their campaigns have tussled over Romney’s past at Bain Capital and the (non)release of his tax returns. But all this scuffling hasn’t taken into account an until-now unreported fact about Romney’s days at Bain: When he was running the private equity firm, he invested tens of millions of dollars in a pair of companies that specialized in outsourcing high-tech manufacturing and that developed offshore production facilities in Mexico, China, and elsewhere to build electronics for US firms.

In March 1999, shortly after Romney left Bain to take over the troubled Winter Olympics in Salt Lake City, Brookside Capital Investors Inc., a Bain-related entity wholly owned by Romney, filed a report with the Securities and Exchange Commission that listed dozens of companies in which Brookside held a stake the previous quarter. The roster included investments in Singapore-based Flextronics International ($13 million) and Florida-headquartered Jabil Circuit Inc. ($41 million), two companies that were leaders in the fast-growing field of outsourcing electronics manufacturing and offshoring production to low-wage countries. Together, these two investments represented almost 10 percent of Brookside’s $559 million portfolio.

For much of the 1990s, most overseas outsourcing involved unsophisticated products like apparel. But in the second half of that decade, US high-tech companies producing computers, telecommunications equipment, and other electronics began contracting out their manufacturing to firms that had established production facilities both in the United States and in overseas locales where labor was cheap.

Such was the case with Flextronics and Jabil Circuit. They were two of a handful of companies that, according to the Los Angeles Times, “exploited the boon in high-tech outsourcing, or ‘stealth’ manufacturing,” producing components or products for American businesses including Hewlett-Packard, Cisco Systems, Sun Microsystems, and Microsoft. When Romney was acquiring stakes in these two companies, they were hot tickets for investors. During the second half of 1998, the leading electronics manufacturing contractors—including Flextronics and Jabil Circuit—averaged an 85 percent boost in stock prices. That year, Flextronics doubled its revenues.

“Outsourcing is good for America,” declared Michael Marks, then-chairman and CEO of Flextronics.

In the late 1990s, Flextronics built a facility in Guadalajara, Mexico, to serve its US clients, including Intel. A Wired magazine profile described the firm this way: “Incorporated in Singapore with its management offices in San Jose, Flextronics has factories worldwide. Its industrial parks, which house suppliers onsite, are concentrated in Brazil, China, Hungary, and Mexico. Workers earn from 70 cents per hour in China to $4.50 in Brazil…By manufacturing in low-cost regions, Flex can cut 75 percent of the price of labor.”

Michael Marks, the American chairman and CEO of Flextronics at the time, was an outsourcing trailblazer and booster. “It is increasingly clear that outsourcing of electronics manufacturing is gaining momentum and acceptance in the world,” he declared in early 1999, noting that electronics firms “continue to divest [manufacturing] facilities.” Though Flextronics had operations in the United States, one of its key manufacturing facilities was in China—where it operated a 450,000-square-foot industrial hub.

A 1998 Flextronics prospectus reported: “We plan to significantly expand our industrial parks in China, Hungary and Mexico, and we recently purchased an 88-acre site in Sao Paulo, Brazil, where we plan to establish a new industrial park.” It also noted, “[O]ur growth is driven by the accelerating pace at which leading [electronics companies] are adopting outsourcing as a core business strategy.” Its key clients, it stated, were 3Com, Cisco, Microsoft, Hewlett-Packard, and Philips.

In a profile in Chief Executive magazine, Marks dismissed concern about shipping US jobs overseas. “Outsourcing is good for America,” he insisted. The magazine crowned him the king of electronics outsourcing: “Marks, more than anyone else, is responsible for the outsourcing trend in the tech industry.” And Romney had provided him capital for his efforts.

Jabil Circuit, which did contract manufacturing for Cisco Systems, 3Com, Hewlett-Packard, and other high-tech outfits, was also bullish on outsourcing. Its 1999 annual report noted, “The virtual or outsourced manufacturing model has emerged as the manufacturing strategy of choice” for leading electronics firms. Its fiscal year 1998 revenues of $1.28 billion marked a 31 percent boost over the previous year’s take. In late 1997, Jabil Circuit, which maintained production facilities in California, Florida, and Idaho, opened a plant in Guadalajara and within a year announced it was considering a significant expansion of this operation for the production of printed circuit boards. It also operated manufacturing facilities in Italy, Malaysia, and Scotland.

Romney’s investments in Flextronics and Jabil Circuit came at the same time that he (also via Brookside) was investing millions of dollars in Global-Tech Appliances, a Chinese manufacturing firm that produced household appliances for American companies, including Sunbeam, Hamilton Beach, and Proctor-Silex, and that depended on US outsourcing for much of its profits. In its 2001 annual report, Global-Tech noted that US outsourcing to offshore production facilities was essential to its prospects: “Household appliance companies are focusing on their primary strengths of marketing and distribution, while increasingly outsourcing product development and manufacturing…Our ability and commitment to develop new and innovative, high quality products at a low cost has allowed us to benefit from the increased outsourcing of product development and manufacturing by our customers.”

When Mother Jones first disclosed the Global-Tech deal last week, a spokeswoman for Bain said that the company would not comment on the Global-Tech investment or provide any additional details about that transaction. And a Romney campaign official declined to address the issue of Global-Tech profiting from US outsourcing. The Romney aide did assert that the Global-Tech deal was nothing other than a routine investment in a foreign company: “[I]t’s my understanding that while Brookside is a part of Bain Capital, it is not a private equity vehicle. Brookside makes passive investments in public stock. They don’t control or manage the companies they invest in.”

Asked about the Flextronics and Jabil Circuit investments, the Romney campaign replied in a similar fashion, noting that “Brookside is a hedge fund that does not manage the companies in which it invests.” The campaign, once again, would not tackle the issue of Romney investing in ventures that made money off outsourcing and offshoring. Bain did not respond to a request for comment. (Michael Marks, who stepped down as Flextronics CEO in 2005 and is now a founding partner of Riverwood Capital, a private equity firm, was traveling and unavailable for comment. Jabil Circuit did not respond to a request for comment.)

With the outsourcing debate still raging in the 2012 race—the Obama crew has not let up on its Bain attacks, and Romney’s camp has (falsely) accused Obama of wasting stimulus money on green-tech firms that used the funds overseas—Romney’s past investments have become a potential political liability. On the campaign trail, Romney has denounced China for poaching US jobs, and he has cried foul when Obama blasted him for having once been an outsourcing profiteer. Yet when he was in charge of a half-billion-dollar investment fund, it acquired hefty positions in US and foreign firms that profited from US companies shipping manufacturing (and jobs) to China, Mexico, and elsewhere.

The value of outsourcing manufacturing to cheap-labor regions is a matter of debate; it’s a practice that can be beneficial for US consumers (though not workers) and bolster the competitiveness of US firms, and it might be partly inevitable in a globalized economy. But, if there’s a question over which of the two presidential candidates sought to make millions of dollars by investing in outsourcing and offshoring, there’s no debate. In the late 1990s, Romney and his Brookside Capital Investors Inc. believed it was right to bet on US and overseas firms that were capitalizing on outsourcing. Now his campaign says that was just a routine business decision—yet one with a political cost that has, as they say in the financial world, been carried over.